Chez Bang Bang has officially become an unofficial wildlife preserve and I am unofficially Trixie Dolittle, which is also appropriate as it describes exactly how I like to spend my weekend – doing little, which is also why I, the Reluctant Gardener, STILL haven’t planted my babies that I carefully and lovingly nurtured from the seeds from Flavor Bomb tomatoes all the way back in the early days of The Q*. 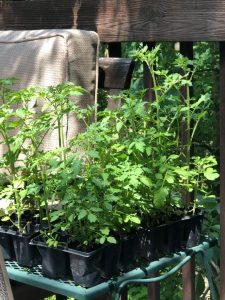 *you know The Q. The Big ‘Tine of 2020. When we all stayed home, saved up some money because there was nothing to spend it on, forgot how to wear bras and often times underwears, discovered we hate wearing makeup, bonded a little too tightly with our cat and may just actually have started to believe we are a mother/daughter duo and have been practicing a song and dance routine, suffered from a little depression/anxiety and now takes a pill for that, ate every baked good this side of the Mason-Dixon line, and made Netflix our new boyfriend by spending many nights on the couch or in bed together.

This post has quickly become long, run-on sentences and we’re just going to let it ride itself out. You can’t squash creativity once it gets rolling, Reader. 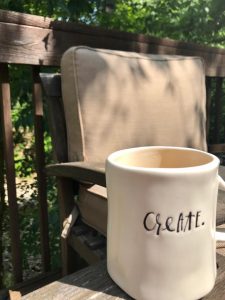 During all this stay-the-eff-home time, I opened a little restaurant called Trixie’s Cafe.

And my customers started pouring in. 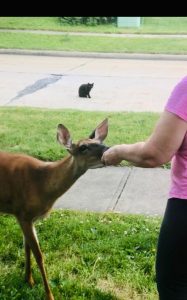 Jane Doe stopped in to check out the menu, and she now swings by almost daily. She likes to come for the fruit, doesn’t care for the vegetables.

And yes, that’s my beloved indoor house-cat sitting in the middle of the street, like he owns that shit. It’s all about attitude, Reader. Believe you’re bigger and badder than you are, and you can stop traffic.  At least on a quiet no-one-drives-down-it-unless-they-live-here street.

Another customer, Lil’ Fatty (that’s his rapper name, he’s in the music industry and is trying to knock Alvin and The Chipmunks off the Billboard Chatter list), Lil’ Fatty is fond of peanut butter or sunflower seed spread sammy’s, cut into easy-to-handle quarters.  He’s mostly around for breakfast, he likes to eat his biggest meal of the day early on. He can be a little demanding and the other day the chef had nothing handy so she served him a samoa cookie, and he did seem to be a fan of coconut goodness. 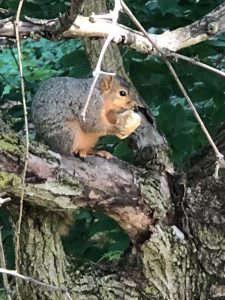 And of course, there’s Taco, the blind outdoor kitty raccoon. Taco is who prompted me to actually open Trixie’s Cafe, she believed in me and our mission (to keep her well-fed on a daily basis so she stays out of everyone’s trash cans).

I was a little irked one day last week; the chef at Trixie’s Cafe (me) took a hiatus from cooking and Taco hadn’t been showing up on a regular schedule so we got a little lax in serving. And then later one evening, My Mister found her in a trash can we left outside of the garage after a cookout, and I was a little furious at the situation. Not at our girl Taco; I was mad at these lazy restaurant owners (me and My Mister) who’s negligence forced this sweet girl to scavange around like an animal, trying to find something in a damn trash can.  We quickly opened the kitchen and took her a proper meal. 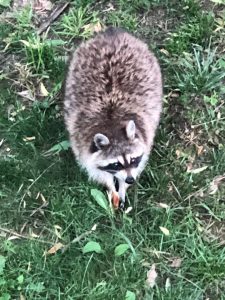 She has a really tough time seeing and just yesterday she walked into the post of my bottom deck. And that’s why I try to serve her up something hot, so she can find it using her exceptional sniffer.

Yesterday’s menu offered up a Handheld Omelette – ribeye and chicken omelette served up in a hotdog bun. 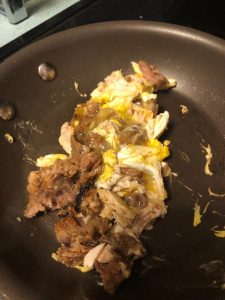 The irony of it was the chef was too lazy to cook for herself and had a bowl of frosted mini wheat for dinner.

The chef has taken some very creative liberties with the menu, and actually crafted a brand new sandwich item that she named You Want This in Your Mouth sandwich.

It came to her in a rush, the way most great things do – the idea just flowed through with a ranging energy. And also, Taco was sniffing around outside so the chef was trying to quickly cobble something together with what was easily at hand before she wandered off.

The You Want This in Your Mouth consisted of a slice of Costco’s most delicious cinnamon bread. 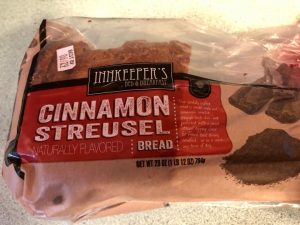 If you haven’ tried this, Reader, I insist you do. Your life – and your weight – will be changed forever. If you don’t have a Costco membership, stop in to Trixie’s Cafe. We will serve you up two piping-hot slices with Kerrygold butter – which is truly the butter your tastebuds deserve – and a cuppa joe of your choice.

Back to the sandwich. So we started with a slice of cinnamon streusel, untoasted because there was no time. Haste is sometimes the mother of invention, is how the saying goes .

From there, I slathered on a thin layer of peanut butter for a good does of healthy fat and protein, to keep her energy up and her coat shiny.

It seemed kinda plain, and I had a corner of leftover cheesecake in the refrigerator so I took that out and spread that over the peanut butter.

After folding over the bread into a half-sandwich, the waitress (also me) went to serve it to Taco, but along the way took another hard look at this sandwich and decided, “This looks amazing, and I need to take a bite!”

Two great tastes – peanut butter and cheesecake – would they taste great together with a cinnamon base?

I had to know. 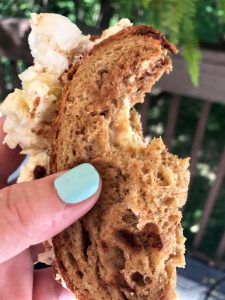 And that’s how Trixie officially ate raccoon food and also invented a new sandwich – which DID taste amazing – and aptly named it You Need This is Your Mouth.

Stop over for a bite sometime, Reader. I just ordered a case of wine, so even if you don’t like the cooking, we can get drunk together. And that’s the cornerstone of a great cafe.