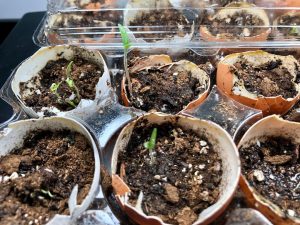 I feel as if I’ve just given birth. Exactly the same as a pregnant woman who grew a baby for 9 months, and then squeezed it out of her vagina with a lot of butthole ripping and pooping on the table. Exactly. The Same.

Considering I really didn’t know if this little endeavor would even work, I have to say I’m surprised and delighted that something is sprouting in my eggshell cups.

I read many-ah articles and watched many-ah Youtubes on how to grow seeds from just cutting open a tomato and scooping out the seeds. I was worried about the gel sac the seeds are contained within, and if these little fellas could break free. Some info said it could, some said nay nay. I went for it anyway.

Well, I’ve got about half success – better than I had hoped. I  have no doubt that my AeroGarden light is to thank for this success, and that was a good ten bucks I spent three years ago and stored in my garage unused, which is also why I hesitate to get rid of anything because what if I decide to start a new reluctant hobby or actually use a piece of exercise equipment that’s lying around, Reader – then what?! I’m out of luck, that’s what.

It was JUST YESTERDAY that I went downstairs and hung upside down on my inversion table, which I also purchased probably five years ago from the Interwebs for a cheapo price and use sporadically and I’m not going to Marie Kondo it because while it may not inspire JOY, it does inspire my vertebrae to get more space between them so that’s why.

I did recently spy a balance contraption in the garage, something I swooped up for a few cheap bucks at the discount store, that one time when I was busy making Grand Plans to work on my balance and this two-dollar deal was going to change my world. 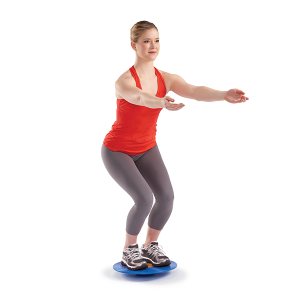 I tried it in the living room and almost fell over into the giant television so it got re-homed to the garage and that’s where it’s lived ever since, amidst a pile of garage sale junk we never actually sold at the garage sale and it will probably all get donated as soon as donation places open back up to accept our germy wares.

Recently. Very recently, during out Stay At Home orders, My Mister and I took a little walksy and I tried to walk a curb like a balance beam and physically do not have that move in me, Reader. I just. can’t. do. it.

I don’t know why, stop asking.

I just literally cannot put one foot in front of the other and walk a straight line and now it’s officially on the record in the event I get pulled over and the fuzz thinks I’m snockered and makes me walk a line and I CAN’T, COPPER. Read my blog, you’ll see this was well documented! So this is now my alibi or something along those lines. I’m not a lawyer but I did watch a lot of Judge Judy while HandyDan was here getting his hip healed so I’ve almost completed my law degree and I’m pretty sure this is how a future alibi might work.

Anyway. After I couldn’t walk a curb, I did spend precious time walking around the living room and hallway of Chez Bang Bang with Howard Stern’s book on my head to try to work on my balance and now you know just one more snippet of the excitement that happens around here and you’re even more jealous you don’t live with us. It’s a party, Reader, a crazy-ass girl-gone-wild event night after night. 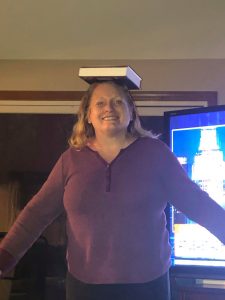 Now I’m thinking I need to pull my balance board back into the living room and give it another go. And that’s why my garage has a heap of stuff in it. Because some of it is valuable and may get used once a year.

Somehow we got down this winding road and I’m not exactly sure how, so let’s recap:

1/ I’m officially a horticulturist and should probably have my own tv show.

2/ I know legal stuff so well I should probably have my own tv show.

3/ I can show you my organization tricks to store stuff you may one day need in a heap in the garage and should probably have my own tv show.

4/ I’m a fitness guru and should probably have my own tv show.

Basically, I’m a celebrity and should have my own tv show.