The Bang Bang Theories
Let's Be Friendies
Has the world stopped spinning, Reader?? Something is definitely off it’s axis, as it is 8:31 a.m. and I am up. In the MORNING, Reader. The REAL morning, not the morning I pretend happens at 1:00 in the afternoon. I’m drinking coffee, eating my organic oatmeal, cats are fed.  What the what is going on around here???
Well, I’ll tell ya what. One way I get out of my own “woe is me” head is to do something for someone else. And so on Facebook, I offered up the one thing I can offer people at this point, which is my time. If someone needed help with something, they just had to let me know when/where/what. And my friend needs help today packing up an attic’s worth of shit from a house she’s selling, and that’s what we’re doing this morning.
Now Reader.  I don’t know if any of you have seen me move around lately. But as Kenny pointed out yesterday, after I’d spent the better part of the day staining the deck, I’m about one bout of hard work away from needing a wheelchair. When I forget to take my arthritis medication, which is more often than not because bad schedule on my part, I am soon reminded that I need it.  So yeah. Some days it’s rough around here.
However, if my friend thinks I can haul boxes up and down steps, I will be there. I may be better at the packing part, we’ll see.
Funny enough, all the requests that I did get from people for help all involved packing up shit because they’re moving.  It’s one of the things I’m the worst at, haha. Had it not been for my friends four kids doing a shit-ton of moving for ME, I would probably still be living at my old house.  But I can box the hell out of stuff, so we are going to get it done today.
So that’s my morning. And a BBQ this evening. So yeah. Spending time with friends. Good day.
Yesterday I did jump right in and start my porch staining, as I had so boldly claimed I was going to do. The only way to do it is to just fucking do it.   You can see from the picture below how much it needed a good drink of stain. I don’t believe it’s ever been stained before.  I have the entire railing and spindles complete. Just need to do the floor either today or tomorrow, as I have time. I’m super excited about it because I love love love my deck, and it needs to look like someone loves it.
Now it does. 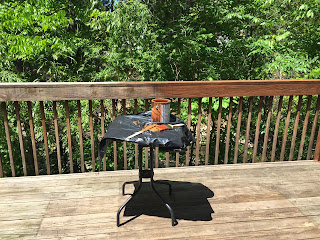