The Bang Bang Theories
Let's Be Friendies
The mailman came to the door today and I couldn’t for the life of me figure out what the hell I’d ordered in the little brown package he carried.
Me to Brain: “Did I order something lately??”
Brain: “You’ve been ordering quite a bit of shit recently, actually, for an unemployed person.”
Me to Brain: “Yeah, but that was just small $10 items to keep my spirits up, and it happened to be stuff I could use, too, such as a new pair of flip flops with a massaging bottom that feels nice on my feet, and an Ohio necklace to show where my heart lives.”
Brain: “You didn’t need that stuff. You know you didn’t.”
Me to Brain: “Shut the fuck up. Back to the original question. Am I still waiting for something else that I don’t even remember ordering??”
Brain: “Just go get the package and find out and stop bothering me.”
So that’s what I did, all the while worried-wondering if I’d lost my mind to the point that I’m now ordering stuff I don’t even know I’m ordering. I mean, what if I”m putting stuff in shopping carts all over the Internets and don’t even know it until it shows up??
That’s dangerous behavior, Reader.
I opened the package and saw this little green box of Chaga, and it took me several moments for my brain to process what it was, all the while hoping when I opened the invoice it wasn’t some $275 little nugget that I might have looked at (although I had no memory of doing so) and then accidentally bought. 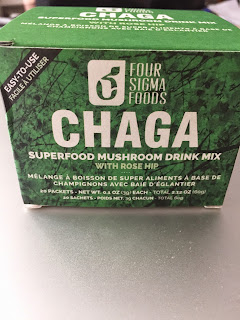 What I found instead of an invoice was a gift note from my friendie The Healthy Hoff, who ordered me some Magic Mushroom….Tea….because she felt sorry for me wanted to help me after watching me help her move shit  this past weekend from an attic in a vacant house she is trying to sell.  Wherein I say “I helped” I really mean “I looked through and moved boxes to the top of the stairs and she carried it all down. Three Flights. By Herself.” That’s how I helped.

But I did brave potential spiders, webs and other possible scary things and only screamed once when I opened a security box and it was full of webs that may or may not have touched my gloved hand, and other than that I was brave. Even when I was fairly certain I was at some point going to uncover a carcass of some animal that had died up there, because there was a smell in a specific area, and I may or may not have seen some sort of animal poop on top of a box. I just tried to ignore all that evidence that pointed to Dead Thing and plunged ahead despite my concern. I’m brave like that, like a warrior. An Old Attic Warrior.

My reward for bravery was Magic Mushroom Tea. And also because she probably wants to get me a little more healthy and nimble so the next time I can carry some of the boxes down the stairs. Probably that.

I was a little skeptical about the tea, because there was An Incident.  I tasted something made from a mushroom while she and I were in San Francisco last month. That’s where we ate at a vegan Asian restaurant and I put Rieshi Mushroom Medicine Soup in my mouth. The Offending Soup is the brown liquid with the silver ladle. The white bowl of deliciousness in the front was their won ton soup, which could have delightfully fed a small village. 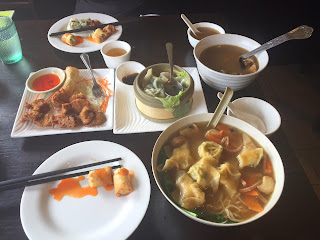 Yeah, we ordered a lot of food. That’s how we roll.

Anyway, the Medicine Soup made me want to claw out my tongue from my head. I made an actual “Pa-tooey” sound as I spit out this part of the soup onto my plate. Because I’m a lady. 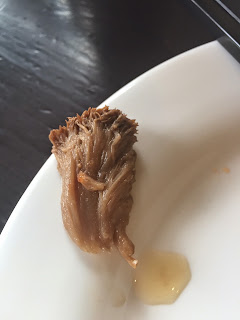 This may have been a sponge. It would not chew into pieces. It refused. The Healthy Hoff kept insisting I just swallow it down, it’s good for me.

I’ve heard that before, Reader. I wasn’t falling for it.

So with that all-too-recent experience in mind, I had earned a bit of my Magic Mushroom tea skepticism.

However, The Hoff generally does have my best interest in mind, so I did a little Googling about the tea, figured what the hell could it hurt, and made myself a cup. 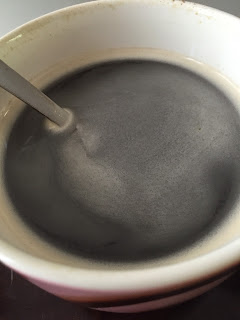 It had an earthy flavor, very mild in fact and not at all as harsh as the Rieshi Medicine Soup Incident.

I don’t know if it was the boost of oom-pa-pa that I got from the tea, but all I know is that later on in the afternoon I had a phone interview for a company I am excited  about and I couldn’t stop my mouth from spewing out words.

They just kept pouring out.

I knew they were too many words, but I was powerless to stop them.

I was speaking to the CEO.

At one point he asked me about my vendor contact with one of my prior suppliers and I said the name,  “Mike Cunts.” I said  MY CUNTS. To the CEO. In an interview.

READER. You can only imagine the horror in my brain and yet I was powerless to do anything about it at that point.

My Mister was in the back room and heard me loud and clear saying “MY CUNTS.” He wanted to know just what sort of a job I was interviewing for. I know that’ s ending with a preposition, but I just said MY CUNTS to a potential hiring person, so there are bigger issues at hand than my trying to rewrite that sentence.

The guy’s name is Michael Kuntz, by the way, I think it’s pronounced like “Koontz” but I’m frankly not sure because he would say it really quickly, as if to avoid his own name. So I think I”m actually correct, but really? That’s what I brought to the conversation.

Thanks for the gift of health in a mug,  Hoff. I will continue to drink a mug full every day, and hope that I can control my mouth and avoid all references to cunts, twats, beavers or anything else that may paint a visual of My Flower during an interview.

2 thoughts on “You Say Tomato…”