Hey there!! Long time, no chat.  I’ve sort of been out of the rhythm of writing the nonsense that floats round in my head. I know, I know – I hear your plaintive cries for more.  I had toyed with the idea of chucking the whole blogging thing altogether, just because who cares, shouldn’t I be doing more important things such as cleaning, helping the needy, taking classes that could oh, by the way, maybe help me get re-employed.

But then I felt like I was getting a little stuck in myself, because my words didn’t have a venue anymore. And I felt like my creativity was getting really rusty, because use it or lose it. While this may not seem very creative to you, Reader, compared to oh, say beautiful watercolors (which is how my cousin is tapping her creative energy, and wow is it nice!), it is a little creative for me.  I just can’t frame this and and hang it on a wall and have people stop by and say ooh and aaah.  Well, I guess I could but that would be some really odd decorating. Which could actually possibly spark a new trend, because why not. Hm. Maybe I’ll start a Pinterest board of my nonsense words on decals for walls. For instance, we could have a decal that says “The Best Things to Put In My Mouth are Not Vegan!” in pretty scripty font and put it right on your kitchen – or bedroom – wall.  We don’t judge here. That could also be a pretty script wall decal! “No Judge-y Zone!” In the bedroom. Or the bathroom. Where ever. We don’t judge what you do in either of those areas.

Hm…I guess I’d better get back to writing on a more regular basis, because see how rusty I am? Those are not even good at all, Reader.

Alrightie, that is not even the intent what I started to tell you all about. What I wanted to chat about today is why is it so gol’darn tough to sleep the older we get?? What-the-what is up with that?? I have gotten into a very awkward and unproductive sleep pattern since I’ve become a lady of leisure. I think I’ve had sleeping problems for years now, actually, but I was forced to get up in the morning to go to the j.o.b.  Now, without that structure, it’s just a free-for-all around Chez Bang Bang.

So I’ve started to really try to train myself into better sleeping patterns. I thought while I was gone for three weeks floating around the West Indies and then beat-nicking around in San Francisco I would straighten this shit out. I was with early risers. It should have helped.

It sort of did, a little. And then I came back to reality and it was was to square one, where square one equals night-owling around until three and four in the morning, and sleeping til noon.

Sleeping til noon makes for a shortish day to get Stuff done, Reader.

So I embarked on a mission to find restful sleep at a reasonable hour.  I have a brainwave app that is actually the best two dollars I’ve ever spent. It’s called Brainwave, 32 Binaural Programs. I plug this in all. the. time. I use it for creativity, meditation, sleep, concentration – you name it, there’s a brainwave for it.  Download it. You won’t be sorry.

The brainwaves usually help, but I have to sleep with earphones and that’s a little uncomfy, and then I find myself waking up when the waves are over or my earphones fall out.

I figured I needed some other sleep tricks.  My brother suggested I do 4-7-8 breathing for better sleep.  A few Facebook friendies chimed in that it works well for them, so I’ve been giving it a try. I do find I fall asleep rather easily, but not in three or four breaths. I need to do this about a dozen times.

Why is sleep so hard for me, Reader? I don’t have any additional work stress, so whyyyy, she plaintively lamented? I mean, I don’t have any trouble at all sleeping from six in the morning until noon. None. Nor do I have a struggle with an afternoon nap. It’s just hard to reset my clock. I wanna go to bed by midnight, up by eight. And sleep through the night.

In addition to 4-7-8 and Brainwaves, I also had the opportunity to try Kangen water, because my friendie, who’s a Frankie Valli Season Singer, was in town for a concert and he hooked me up with two gallons of this Magic Water.

Now, a little about this Magic Water. I only had a couple of gallons. But it was the first time I haven’t gotten up throughout the night thirsty, nor did I have to get up to pee. The theory is, this water hydrates you better than regular water and also does some other magic stuff. I did sleep straight through that night.  I have to say, it was rather impressive. I just can’t afford to get myself one right now, because see the last line of Paragraph 1. So I will be mildly hydrated rather than super hydrated for a while.

And then the other night, after all my tricks were in place – a giant rig-a-ma-role of breathing, brain waving, relaxing stretches – to get a good night of solid sleep, I was deep in dreams and felt a thwack on my face. 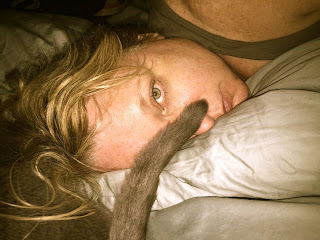 So I guess you know the end of this tail. Er. Tale.

Basically, eight cats = I’ll never get a solid night of sleep. Because a cat tail beating me in the face at three a.m. is part of my world.  All the Kangen water, 4-7-8ing and brainwaving can’t compete with a contented cat, lost in her own dreams, happily flicking her tail right up my nose.