So what else is new with you, Reader?? I wish ya’ll would start some blogs, too, so I’d have other things to spend my time on instead of Candy Crush and unpacking. Do it for me, Reader.  Think of how close we could be if we were able to read each other’s words. Our relationship is at stake here, so really, just do it, and then send me the links so I can be entertained.

Aren’t you sort of tired of this one-sided convo by now?? Well, since I’m all we have (except for you and you), here is my latest.

Be prepared. This is a massive revelation.

I’m fairly certain – no, I’m almost positive – that we have Zombies prowling around in the Ravine at night.  I mean, is this the perfect Zombie Spot, or what? 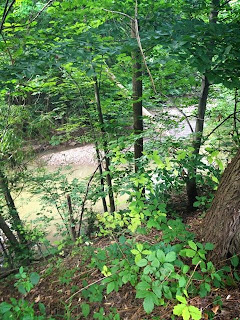 Thanks to our friend Pete – who insisted we start up on Walking Dead back in July – I can recognize the sounds pretty well.

At night, as we lie in bed listening to the sounds of nature, we hear a lot of snorting and twig-snapping. I mean, A LOT of it.

My Mister is under the deluded and really homespun belief that it’s just deer.

I’m not that naive.

Last night, he was in the living room watching t.v. while I went to bed to read my really boring, it feels like homework, it’s the best substitute ever for sleeping pills because I nod right off after about two paragraphs inspiring book by Deepok Chopra, Reinventing the Body, Resurrecting the Soul, and I heard a lot of those snorts and branch-crackings.

It totally freaks my shit when the cats hear it, too, and go on point, glaring out the window and into the darkness.

MOTH: “Whyyyyyy??? What noooooow??” It was really a tich on the whiny side for him being the man of the house and all that.

Not to mention (well, really, I’m going to mention it right now), I had to be The Man and fix the garbage disposal yesterday, something metal was in it and it was not a good sound. He said he’d love to help fix it, but sticking his hand in the garbage disposal was a little too Final Destination for his liking, so I had the honors. I got it fixed. Apparently a couple of nickels had fallen down into it. They were not going to grind up and go away on their own, no matter how much water My Mister told me to run (that was his fix for the problem, by the way – “run a lot of water down there, flush it out.”

Anyway, back to the story at hand. The one about the zombies living in our backyard.

After a delay, he pops into the doorway.

I informed him of the potential zombies in the backyard.

“Go turn on the patio light so I can see for myself.”

He obliged, I think to shut me the fuck up about it.

But I still couldn’t see anything back there. Because zombies are stealthy. They’re like Ninja Zombies.

So I proceeded to listen to the snap-crackle-and-pop. I was not doing so good at resurrecting my soul.

My Mister proceeded to offer an explanation. “You know how you’ve been tossing old bread and chips and cereal over the porch for the birds?? And I’ve told you I don’t think that’s a very good idea? Well, you’ve probably attracted a lot of other vermin  – raccoons, rats, and I heard there was a fox running around the neighborhood, too.”

Me: “Fox?? Do you think that a fox could see the cats in the windows, and leap up and bust out the screens and snatch the cats right out of the house??!!”

My Mister: Slowly shakes head “no,” and goes back to the living room to watch t.v., intent on ignoring me for the remainder of the night.

Well, the happy ending, Reader, is that no one got snatched out of the bedroom last night by a rogue fox, and the zombies must have been full of the biscuits I threw over the porch yesterday because they didn’t try to eat us, either. Win-win.

One thought on “Night Moves”