The Bang Bang Theories
Let's Be Friendies
Reader, I have the daunting task of going through all my boxes of things that are stacked in the garage, things that moved over here 8 years ago and have been sitting there ever since.
I’m following the 80/20 rule while sorting it: 80% of that shit is not making it to the new house. Now, some of it is good stuff that has just been waiting for a bigger home in which to sprawl out.
Most of it is just shit I can’t believe I moved to begin with.
And then sometimes, buried in the boxes, a little gem rises to the top. And while it’s not a necessity, it’s one of those things that has been granted a stay of execution, and shall join us in the new house.
This letter is one of those little gems,  written by my nephew, I don’t know how old, around 7 or 8 would be my guess. 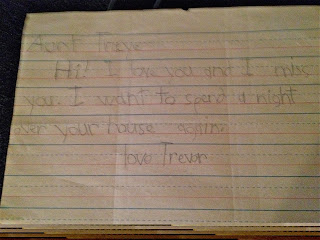 I read it and my heart melted a little, and I think an, “awwwww!” escaped my lips. My nephews used to like spending time at Aunt Trixie’s, because it was pizza and movies and all sorts of things that Aunt’s allow.
So I took the letter upstairs, to put it away for safe keeping. And that’s when I discovered The Rest of the Story: 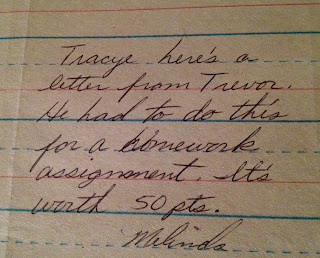 And that became my new favorite part of the letter. I know what loving me is worth: 50 points of extra credit.