The Bang Bang Theories
Let's Be Friendies
This blog is a No Judging Zone, Reader. Well, really, it’s not – I mean, I type a lot of stuff here, you’re welcome to judge away, and a good portion of this nonsense is anecdotes bout how I’ve been a Judgy McJudgerpants, so it really is a Judge Everything Zone.
So with that lead-in, I’ll just say it: We acquired another cat.
Judge away. Go ahead, snigger and deride.  When you’re done, come back. There’s a story behind the story.
Done? Okay.
So my friends sold their house and had to move due to a job layoff from my old stompin’ grounds, The Card Mines.  And they have a problem cat, which they kept confined to a very large unfinished portion of their basement. Because apparently – on occasion – this cat is an asshole and will decide to poop outside the box. Once my friends spent a good deal of money on finishing the majority of their basement, and Random Pooping Cat decided to poop on the new carpet, she lost her Run of House privileges.
This posed a problem once they had to move, and move in with relatives for a short duration whilst they get back up on their feet.
No one wants a Random Pooping Cat. But they tossed the offer out to me: Would I be willing to take this cat for an undetermined time, until they get re-situated? If not, the answer was Death to the Pooper.
That was the only other option.
They called a bunch of cat sanctuaries, but apparently they’ll only offer sanctuary if it’s a young cat with no issues, who will be easier to adopt out. They explained they didn’t want the cat to be adopted out, just someplace to hold it for a bit. No place like that exists in this area.
Let me correct that statement. One place exists like that: My house.
So I agreed to take the Random Pooper, but only on a sworn statement that it was temporary and I am not acquiring an old pooping cat for good.
And that was the plan, until we bought a new house. I’m less than thrilled about a pooping cat in the new house. This house has bad carpet anyway.   So it was looking like death for the Random Pooper.
Then we came up with Plan B. Also known as “The Plan in which we begin to feel more and more like Ariel Castro.”
The Plan involves a 3-level cage to keep her in. One level for food, one for sleep, one for pooping. Easy to keep her contained and not messing up the new house.
The cat, Mystery, and her cage arrived a couple of weeks ago.  She has super sad eyes, and they darted around nervously as we put her in the cage, clanged the doors shut and stuck in the security pins. 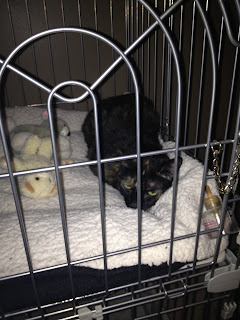 The security pins seemed like overkill. The doors themselves clang shut rather tightly.

Mystery stayed in the cage for the first day, and didn’t eat a drop of food or make a sound, or even basically move once I put the blankie in there with her. And I threw in a few stuffed animals to make it look less lonely, but that was more for me rather than for her.

And by Day 2 in the cage, I was thinking maybe she needed to run around a little. So I opened the door and walked away from it.

She was too beat down at first to move. Her eyes darted nervously from me to the open door. I walked away and she leapt to freedom. Well, not exactly freedom – she ran under my recliner and decided to hang out there for a while.

I let her stay out for several days, not really seeing much of her, but keeping food around so she could come to terms with the new digs at her leisure.

I left the cage open in the event she wanted to return.

DJ, however, decided to move right in. 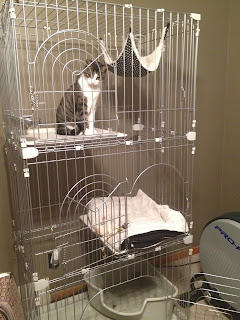 He’s all George Jefferson in this thing, sitting tall in his dee-lux apartment.  He enjoys the hell out of this, rooting around in the (clean) litter on the bottom level, digging it all out of the short side of the box and scooping it onto the bottom of the cage. Then he’ll bound up to the top floor,  get a bite to eat, knock over the water, and survey the land and all of us little people in the room.

When he’s exhausted from all that fun, he cozies up on the mid-level for an afternoon nap. 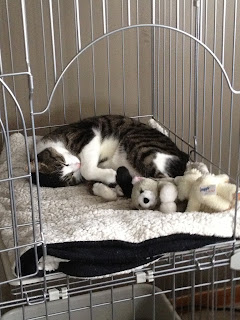 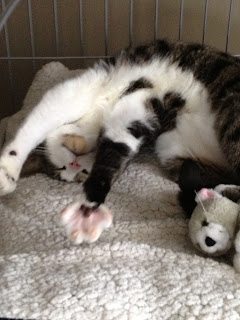 He’s requested we hang some room-darkening shades as the light can be ever so annoying. 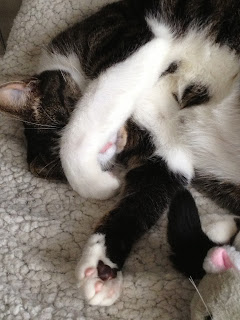 After several days we hunted down Mystery and determined we needed to put her back in the cage, to ensure she is eating enough.

I caged her back up again, but felt so horrible with her sad face that I couldn’t bring myself to padlock the doors, so I just closed them snugly.

My Mister woke up the next day and Mystery was G-O-N-E from the cage and the Baby was back on the blanket.  So either she went all Amanda Berry and kicked the door open, or he evicted her ass from his condo, but something went down in the middle of the night and now we’re the crazy cat people with  SIX cats running amok and possibly random pooping in places we won’t discover until we move.

Go ahead. Judge some more. I don’t mind, really. I’d be doing the same.