The Bang Bang Theories
Let's Be Friendies
Reader, you’re in luck! Today – April Fool’s – is Your Lucky Day. Why? Well, my camera that went to Mexico and decided to stay there for the tequila and pretty senoritas? Actually came home instead! Jokes on you!
There was a very good chance it could have gone undetected for several months – possibly even years. Ol’ Mr. Camera picked quite the hiding place – nestled down in my gym shoe. It was merely by happenstance that I found it as quickly as I did; I had decided to do a little yard work last weekend and was suiting up for that fun-filled activity.
So all my thinking the hotel workers a bunch of thieving no-goods, who wouldn’t return my camera when I called and told me, “No, no camera here Senora”?
Well.
It’s a good thing I didn’t start an international incident or I would have had a little egg on my face. A shame-faced egg-face. I’m always the first to blame the hotel workers when my shit comes up missing. Why not, right? And only one time – ONCE – did Lupe screw me, and stole some shit I purchased whilst in Las Vegas. But hey, steal from me once, and I blame hotel workers for life. That’s my motto.
And ironically, my first job was as a “housekeeper” at Holiday Inn. Where I never stole anything found in a room (except for porn, and I’m pretty sure they weren’t coming back looking for that, it had served it’s purpose). I remember my biggest turn-in was an expensive looking camera. They called for it and I had turned it in and the lady was crying tears of relief -they had just returned from their honeymoon and had all their photos (wedding, too) on it, so see, I was an Honest Abe and expect the same.
But now I’m off on a tangent that has really no relation here as I didn’t even leave my camera behind, but blamed the hotel staff anyway. As my daddy says, “ya point the finger at someone, and there’s always three pointing back at’cha.” So fingers point to me on this one. And my camera, for hiding.
And the photo where it all began? The picture I just had to take before we left? Of our last room service breakfast? Well, it’s really quite fittingly lame. Behold. The Last Day Breakfast Photo: 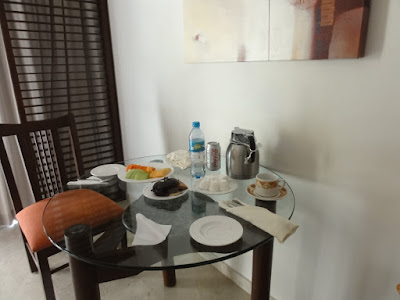 But now? You can see some of these!
Here’s how we spent our days – doing a lot of this: 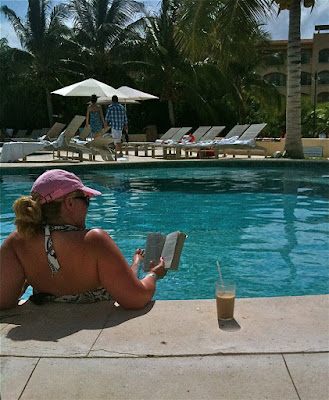 And then in the early afternoon, we’d move to here: 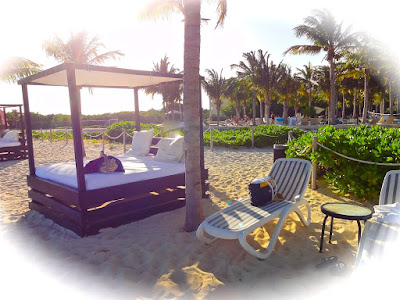 The important part to note about the picture below is to pay attention to the drunk guy in the next bed over. Dude was snockered, and climbing up onto his lady and dry humping her on the bed. 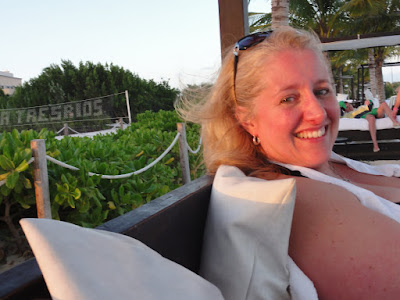 I told Dawn, “I”m going to get a picture of this!” and I really thought I was using my indoor voice even though we were outdoors, but maybe he just heard us laughing at him and turned around and said, “Are you trying to take a picture of me?” and I was all, “Dude, don’t be so self-focused, why would I want a picture of you dry-humping (I do! I do!), I’m taking a picture of my friend.” And then I had to act like I was doing that, and his dry-humpee got up just in case and there he is in the background sprawled out.
So my lesson learned for next time: Be quieter about my photo stalking intentions and take a movie instead for Youtube. Damn it, lesson learned too late again.
He doesn’t look drunk at all, does he? 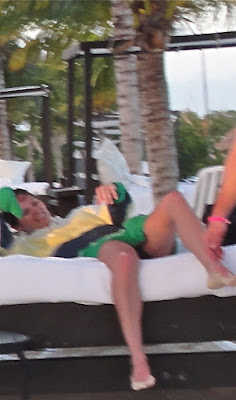 And at night we’d gussy up a little bit and do some fiesta-ing: 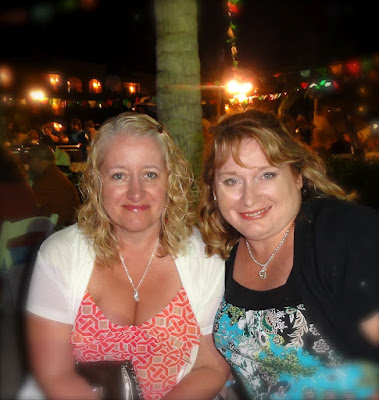 And then 4 nights were gone in a flash and it was time to come back home.
The end.