The Bang Bang Theories
Let's Be Friendies
This is going to surprise a few of you who think you know me as a Garth Brooks/Elvis-lovin’ geektoid. Well, I am all that. But I also like Guns n Roses. And Saturday night I said YES to a GnR Tribute Band called November Rain, playing at the House of Blues.
Kenny insisted I was going to rue the day I said yes. I wasn’t exactly rueing, but perhaps it wasn’t really my thing. I realized that maybe it wasn’t my thing when, instead of really jammin’ to the metal, I was looking at the House of Blues logo and making up my own names for it, for instance, Blouse of Hues, Louse of Hugs, etc. You get the idea.
Then Kenny bought me a beer. A beer as big as my head. In a can. 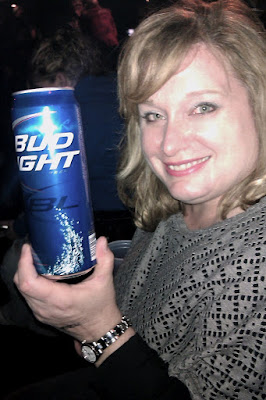 And before too long I was enjoying myself a little bit more.

So while I didn’t rue the Yes – I did have great company at the event in the form of Mr. & Miss Hoff – I would have been more jammable if it were in fact a Brooks/Elvis combo. And a head-sized beer would have still fit right in.