The Bang Bang Theories
Let's Be Friendies
Kenny has a fetish.
What excites him? A very tight, moist package.
He gets excited when he sees it, and can’t control his urges in public.
He loves the way it feels in his hand. Cannot resist the smell. Dives in face-first. Rubbing it.
All.
Over.
His head.
What titillates him so?
Why, The Wet Nap. Of course. 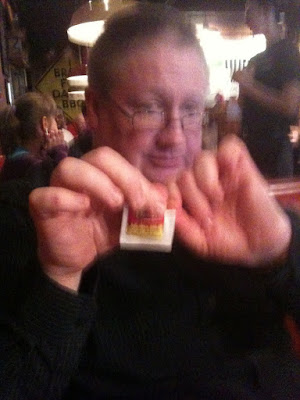 He takes great precision with opening, being mindful to tear from the edge, slipping the wet, folded towelette from the tight confines of the foil-lined package.
Unfurling it to maximize it’s potential.
And then quickly burrowing his nose in it, before the smell dissipates. 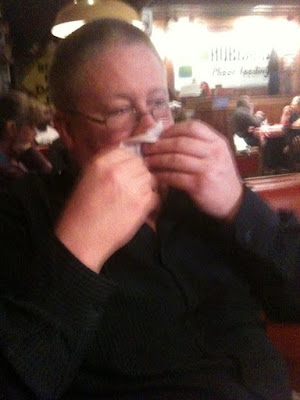 From there, he proceeds with a cat-like detail: Washing his entire face, the back of his neck, rubbing it over his shorn hair, before using the last remaining drops of lemony freshness to wipe his fingers clean.
The wet-nap is second only to the Hot Towels served in first class on an airline. We had the luxury of traveling in first on our recent trip to Vegas. I had forgotten about the steamy hotness that awaited.
Kenny did not.
He saw the flight attendant prepping.
He put his tray table town. Took off his glasses, reclined back in his chair and closed his eyes, proclaiming, “Ahhhhhh…..here they come!”
On the return trip he scored not one, but TWO of the hot towels, and promptly placed one against the back of his neck, and draped the other across his glasses-removed-in-anticipation face.
I pretended I didn’t know him, and sipped my gin, looking out the window. Which is why there are no photos chronicling this event. I know you’re saddened. For that, I apologize. But sometimes? Blind staring out a window better serves me.
But alas, despite the lemony scent of the towelette, and the hot steamy washcloths of first class, they both take a back seat to that which holds the #1 spot in Wetnap Goodness: The Quaker Steak & Lube naps.
Not only lemony. Not only moist. Not only large. But also, STEAMY. The perfect storm of pleasure for those who adore the moist towelette.
Which I found to be somewhat disturbing while writing this, apparently, there’s enough interest in the wet nap to have a dedicated museum.

Oh, Google. You DO know everything.