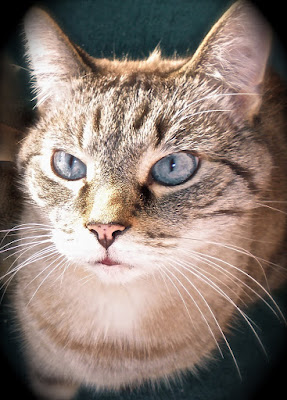 May 30, 2011.
Rest in Peace, Stanley.
He had a quiet death at home, sometime between 3 a.m. and 6 a.m. We left him in peace, not because we wanted to, but because animals instinctively need to find their own way, alone.
We had been out visiting friends and when we returned home around 11 p.m. we noticed he was lethargic and largely unresponsive to stimulation. He did purr – and purr loudly – when we scratched his ears and told him how much we loved him. We made him as comfortable as we could, he wanted to be on the cold bathroom tile floor.
At first we feared it had just gotten too hot for him in the house, but he had thrown up earlier in the day, so he was not feeling well in general. We turned the central air on when we got home, thinking he needed to cool off, but he didn’t feel hot. He was just sick with that stupid cancer.
Stanley was a great cat, a really great cat. I know everyone says that about their pet, but he truly was a good boy. He got along with everyone – people and other cats, was an excellent lap cat, slept in bed on his pillow between his people every night and didn’t have any bad cat behaviors, save for eating flowers.
He made it to Spring, and enjoyed some beautiful days on the porch. He was eating and engaged with us right up until his last day.
We find comfort in the fact that he died at home, in his own time, on his own terms. He had had enough vet appointments in the last five months, he was due a little bit of ease.