The Bang Bang Theories
Let's Be Friendies
Now, about those cruise cupcakes. They were crafted in a storybook setting: 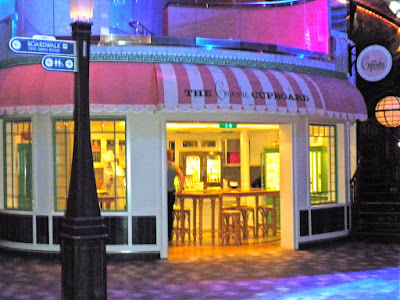 Seriously, who could even resist the cuteness of the Cupcake Cupboard? It wouldn’t surprise to find out they had cute little elves working in the back, baking and frosting and decorating. It was adorable. Inviting. Inviting me right on in, Day One, where I scoped out the tasty morsel that was to help lead me to success of my cruise goal of a different cupcake in every port.
I spied Red Velvet. Superman, meet your kryptonite. Holy-Mother-of-Garth, who could resist this? 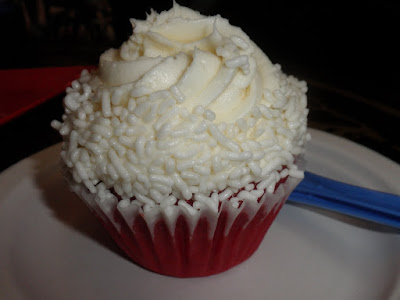 It did not disappoint. The cake was dense and moist, not dry or crumbly, and the frosting was not-too-sweet heaping mounds of cream cheese confection. With sprinkles! Dear Garth, the Sprinkles!
I was on a sugar-high, high on life with the expectation of deliciousness for only $2.50. Our friends thought that was a ridiculous amount to pay for a cupcake, but I thought it quite reasonable, considering you’re able to enjoy fresh-baked goodness out in the middle of the effing ocean, for cryin‘ out loud. I guess I just expect to pay more out there. Now, as all cruise ships offer, there were pee-lenty of free goodies for the taking, but for the girl who never met a cake she didn’t like? Well, it had to be these.
And then on the second day, The Cupboard created Turtle Cupcakes: 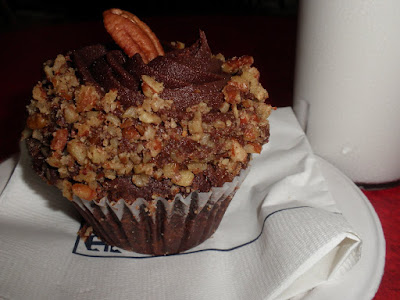 The fudgy frosting held a melty surprise of soft and gooey caramel. Again, on the cake barometer of life, it was the perfect mix of sweetness & density. A cuppa milk and the treat was complete. I actually did save a mouthful of it for Kenny and plopped it between his lips while he was playing cards in the casino. Not being a cake guy, he admitted it was delectable.
On the third day? We had a little trouble. Red Velvet and Turtle were staring me down from behind the glass cabinet. I wanted to go with a tried-and-true, but alas, I succumbed to Being Adventurous (haha, that’s as adventuresome as I was on this trip, no climbing waterfalls this go-round) and ordered the Flavor o’the Day: Root Beer. 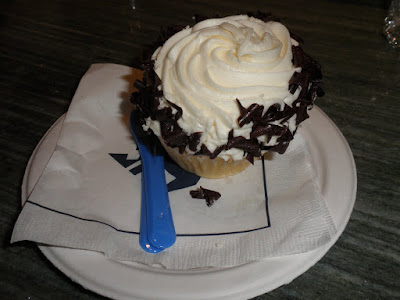 What a way to fuck up cake.
It just….wasn’t good. I grudgingly ate the entire cake, but I wasn’t happy about it. But a goal is a goal.
And then, I missed the next day. I think I was subconsciously so soured by the trickster-cake that I kept myself too busy to go down there before they closed. And I could feel diabetes starting.
By the next day, I was saddled up and jumped back on the horse. Giddy-up, Cupcake. Again, after a gunslingin‘ staredown with the Turtle & Red Velvet, who were in cahoots and laughing at me for my debacle with the root beer mess, I shunned them once again and ordered up Peanut Butter flavor. How can you eff up peanut butter?? I love peanut butter. I love cake. I love fudgy frosting.
It was sure to be a hit. Right?? 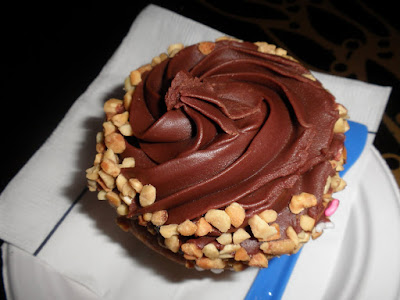 Zoinked. Again. So. BAD. I didn’t even finish it all. I could hear Red Velvet and Turtle hardy-har–har–ing, those fucking gloaters.
And by then I’m experiencing a little anxiety. We’re rounding for home, with Friday looming, which was technically the last day for cupcake goodness since they were kicking us off the ship Saturday morn. Translate to: no more cupcakes.
I panicked! That’s the only explanation I have for what transpired next. Three of ’em. To-go, please. That way I could pretend they were for the party I was having in my room later that evening. Um, yeah. A party of one, what’s it to you? It’s impolite to judge, Reader. 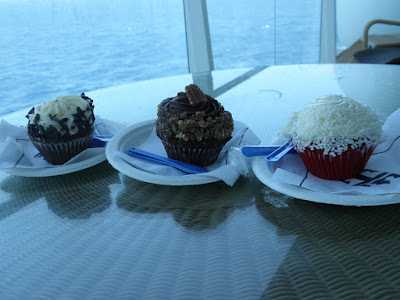 I mean, in my defense, I had been foiled twice now! I couldn’t risk my last chance cupcake being some disappointing suck-ass flavor. So it was back to the basics, with both a Red Velvet and Turtle awaiting to get acquainted with my mouth, and in the spirit of adventure, I tried another flavor o’ the day: Vanilla. Nothing tricky or fancy. I thought I had learned. I poo-poo’ed the Orange Creamsicle and Coca-Cola they tried to push my way. No thank you, Sir! I will NOT be tricked again.
It was a long process to ingest that much sugar in a short amount of time, spacing it out between our lunch and dinner dates, but with some careful planning I managed to work ’em all into the day. I had to stay up until 3 a.m. to find time for ’em all, but gol’darn, I did it. My years of corporate planning & organization courses really paid off, too, because I had the forethought to bring up a few glasses of milk and store ’em in the fridge, knowing they’d be unobtainable in the wee hours of the morn.
So there you have it. The story of the Cupcake Cupboard. And, oh, by the way, the Vanilla cupcake sorta sucked, too. Maybe if those other flavors stood alone somewhere, like if someone just whipped up a batch and brought ’em into work unexpectedly and put ’em out in a common area, and you didn’t have time to grab breakfast that day and you were wondering how you were going to make it all the way until lunch with no food and then oh! out of the blue appeared some free cupcakes? Maybe in a scenario like that, they could be adored. But next to a cupboard filled with Red Velvet and Turtle? They were just the unfortunate stepsisters in this flour & sugar fairytale.
I gained five pounds. Five. Solid. Pounds. Cake comes at a cost, it seems, and not just the $2.50 per piece.