I like small woodland critters as much as the next guy. Well, maybe not as much as the next guy if that guy happens to be some outdoorsy nature-lovin‘ fuck, like that guy who went and lived with a bunch of bears in Alaska until they ate him. I don’t like ’em that much. But I have a reasonable appreciation, to the extent that they can live outside without my infringing upon them too terribly much.

So then I pulled in the driveway and saw a bushy tail hanging out of the garage: 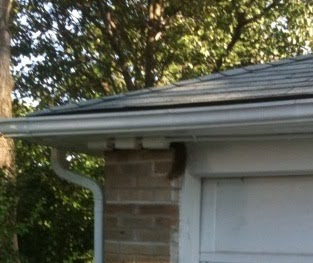 Yep, a family of squirrels have made themselves right at home. There’s a couple of spots there right near the top of the garage that apparently provides a hole large enough to accommodate a squirrel body. Kenny said he’s been aware of it and just let it go, they seem happy in there and sort of run back and forth in the rafters. I’m of the belief that we don’t need to support these Squatters and need to shoo ’em out before they eat absolutely everything we have stored in the garage. Read: many of my boxes of Things that I have stored in the garage.

Internet, should we allow the Squatters to take over the garage space? How long before they assume complete control of the garage and go all Bruce Willis/Diehard on our asses when we open the garage to get the lawnmower? I’m not feeling comfortable at all letting them claim a foothold here. Yesterday there were two of ’em and they were clinging to the brick and fighting it out. I do not appreciate seeing that type of strife as I pull in the driveway. No siree.

We’ve had the new Lexus four weeks and a day and today an 18-year old girl rear-ended me. Power was out due to heavy heavy storms and all the traffic lights were out. She didn’t feel the need to slow down/stop at the intersection and well, she was 18. I had to pat her and calm her down. Her car got the worst of it, Kenny’s Lexus is pretty scuffed and has some dents, too. So I’ll have this fun to deal with for the coming week. Par-tay! Ah, good times. And, I was on my way to get some spiritual enlightenment from Mother Meera who’s passing through from India, so I missed that. Instead I went to Giant Eagle and bought the fixin’s to make pizza and a bottle of Moscato and I’m sitting here getting my own brand of enlightenment.

Things I found out about my vagina whilst on vacation: Gold Bond powder and Aveda Rosemary-Mint shampoo don’t belong up there – they both stingety-sting-sting.

The Mister and I saw the new Cruise/Diaz movie, Knight and Day and we really liked it a lot. We also saw Toy Story 3 in Digital 3-D, and I liked it, too, even though I’m not much of a cartoon lover, I still liked it, although it wasn’t a life-altering experience for me or anything. It was just a movie that garnered a bit of a teary moment at the end, but certainly nothing that I need to see again. Maybe I’m just an asshole-cartoon-hater-with-a-stone-where-my-heart-should-be. Maybe.

I’ve been having a weird worry of getting home invaded. I’m trying to deny the thoughts to the Universe because I certainly DO NOT need this to manifest into my reality. In the meantime, weird “warnings” have been cropping up. For instance, while on vacation, sailing around somewhere in the Southern Caribbean, a random phone call made it through to my voicemail and it was an offer for a free in-home security system if they let us advertise in our yard. So we’ve been locking our inside doors as well as the outside doors, getting her all locked up tight around here. And I’m thankful we have a barkety-bark-bark dog who lives downstairs.

So there ya have it, from Snatch-Worries to Burgled-Worries to Squatting Squirrels and Fender Benders – I told ya, a pot-pour-ee. The End.