The Bang Bang Theories
Let's Be Friendies
We spent the 4th of July in St. Louis, Missouri. Harrah’s casino invited us to Come On Down, free airfare and hotel for 3 nights. I had grand plans to lay by the pool and read during the day, with some nighttime gaming action, see the St. Louis Arch, and do other touristy things. Then we got there and realized that it’s not actually in St. Louis, but a 30-minute away suburb, with absolutely nothing else in the vicinity. No pool. Shit-hole closet they called a workout room. But the hotel rooms were nice and the casino was large. Good thing, we spent a lot of time in each.

We made some new friends, one couple who lives right down the street from us and it was a serendipitous moment. I had actually met the lady back in April while we were getting our nails done and we hit it off so well that I wanted to get her number then, but thought that might be creepy so we said goodbye and I figured that was that. But then she recognized me at the airport, told me she had been wishing we had exchanged numbers but SHE thought it would have been creepy, and we had a great three days together. We took a taxi to the little town called Old St. Charles. It was quaint and we shopped at stores that looked like this: 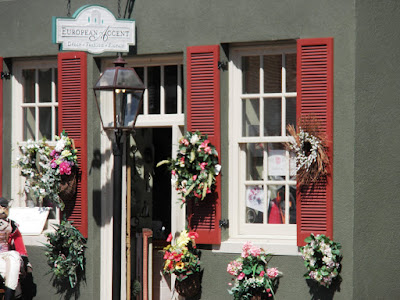 We watched at least twelve different firework shows booming bright from the rooftop of the hotel, drank beers, laughed with our friends and were proud and happy to be Americans, living in the Land of the Free and the Home of the Brave.