Where shall we begin? I seem to have been on an unintentional hiatus, and believe you me, it’s not due to lack of titillating (heehee, the 12-year-old schoolboy part of me chorts*) content. First, we need to step into the way-back machine and dial back about two weeks, to vacation. I guess it’s not so much a “way-back” machine as a “back-up-a-little-bit.” Grand Cayman. We’ll stop there for a bit. 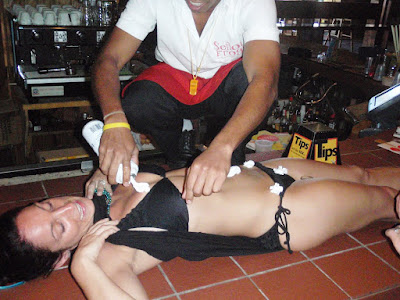 We stopped in at Senor Frogs and had some drinks while I waited for a teeny little diamond bauble to be sized up for me. She is a newlywed, on our same cruise ship, and coincidentally from a neighboring Cleveland area. Good times were being had.


The whipped-cream-squirting dude told me I was next, and tried to cajole me to hop up onto the bar for some body shots. First of all, I seriously doubt my hop-up-onto-the-bar abilities, and somehow it would be much less sexy if it took a couple dudes to hoist me up. More importantly, this body is already shot. No good would have come of any of it. Enjoy the newlywed with the perfect tan and figure. No need to humor the old lady.

Other things we did besides watch body shots being licked off a girl included going on a tour that stopped at the turtle farm. We had just a few minutes to walk around there, the rest of the people in our tour van wanted to skip it entirely but I protested as it was part of the package and I wanted to see the turtles. So the driver gave Kenny and me 15 minutes at the turtle farm by ourselves while she took the rest of the asshol…er…I mean tourists… to the rum store.

The turtles were cool. It was a “look at your leisure” kinda deal so we wandered around and saw some girls (20somethings) just picking turtles up out of the concrete ponds and posing with them. I wasn’t even sure if you were allowed to do that, or if the turtles would die, or more importantly bite your fingers off, but she grabbed one up for me and we got our chance to hold a turtle, without consequences. I dubbed her “The Turtle Whisperer.” 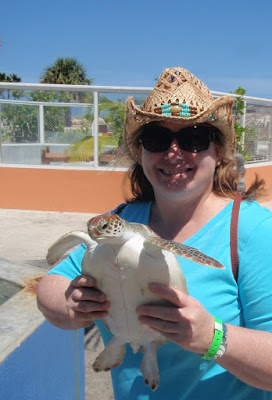 Notice my fantastical hat? It seems I like to have a cowgirl hat while I’m in tropical destinations. I had actually seen this hat while we were at our first stop in Costa Maya, but didn’t buy it because I couldn’t trust myself to be making the purchase. I didn’t know if I truly wanted it, or if it was a decision influenced by too many of these: 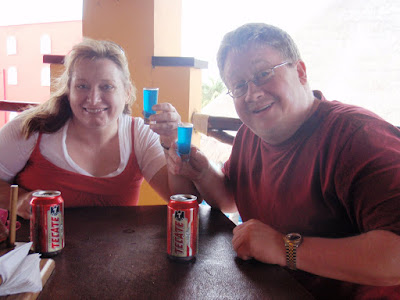 Let’s not forget the follies of Cabo San Lucas during the Spring of ’09, when many many Cabo–ritas led to this decision: 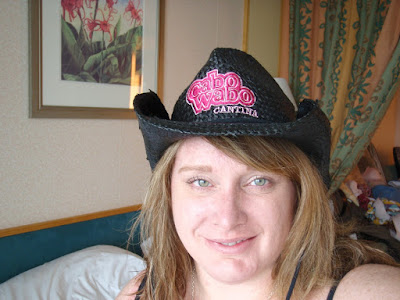 So knowing my history (and I was too hurried to really negotiate, we had to get back to the ship, but I’ll go with the thought that I was making a sensible decision), I didn’t purchase the hat until I had time to regret not purchasing the hat. Lucky for me, they had Pe–Lenty of the them in Cozumel! Lucky.

I traipsed around Cozumel and Grand Cayman in the hat, and then the hat became the very reason I almost had a nervous breakdown while at the turtle farm. How could an innocent little hat, purchased during sound mind and with reasonable decision making abilities, become a source of conflict? Well, it was the combination of two little factors that seem harmless enough in their separate formats, melding into The Perfect Storm of WTF. 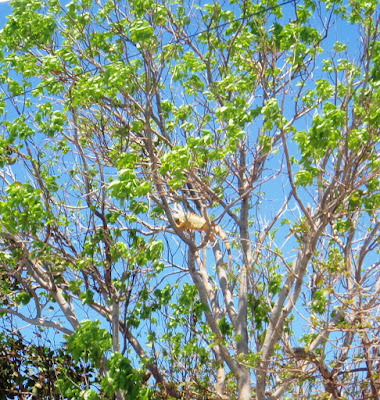 Lizards/Iguanas everywhere. High atop trees. Nestling in bushes. Running around sidewalks. The ability to move super-duper fast and get into tall places and possibly LEAP from those tall places. Who can trust ’em? Not me, I’ll tell ya.

And then, The Hat. Specifically, the dangling beads on the back of the hat, added to charm and delight the consumer. I’m sure the designer never once factored in that the beads swinging down the back and entwining within the hair could ever make one think that perhaps a tropical critter had leaped tall buildings in a single bound and landed on a touring tourist. 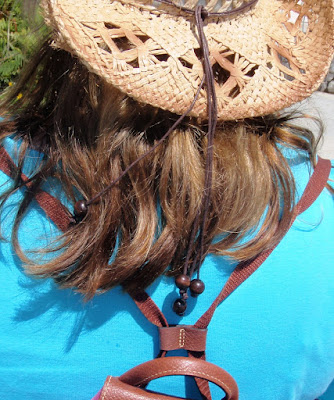 It was a mild and hushed-quiet freak-out. I stood stock-still while instructing Kenny through barely-moving lips to get whateverthefuck was on me, OFF. He laughed, naturally. And sort of swept his hand around my shoulder, insisting he saw nothing, and laughed some more. I was rigid but managed to continue walking until I felt it again. Insisting he GET IT OFF ME, he discovered the source was indeed my magical hat beads.

Here are some other fascinating tidbits from vacay.

In Cozumel, for planned day at the beach, my Hunka–Hunka-Burning Love dressed for the occasion: 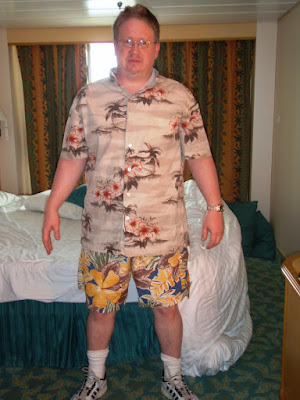 I’ve said it before: Hands off, Ladies. He’s taken.

There wasn’t much going on in Costa Maya, and in fact the only reason to stop is because the cruise lines partnered with the Mexican government to create a stop. It’s nice, with a pool/swim up bar, shitshops, and a restaurant/bar, which is where we headed to watch the festivities. 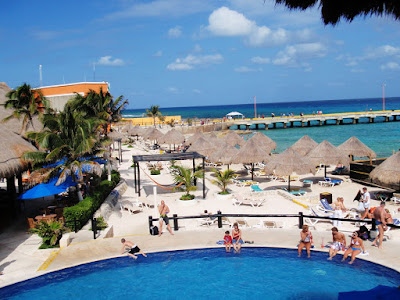 And we were able to watch Costa Maya providing it’s own version of Sexy Times: 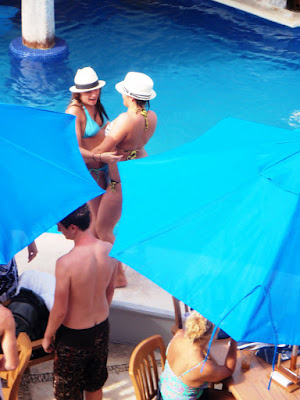 Oscar, our Costa Maya bartender, said he had the best job in Costa Maya because that was his view every time a cruise ship stopped and there is always some sort of girl-rubs-girl shenanigans.

Abstinence was encouraged in Belize: 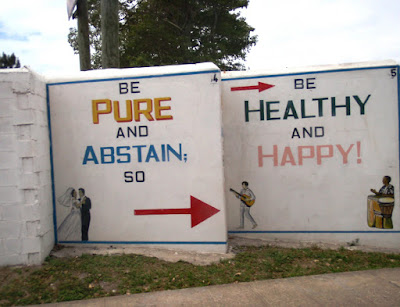 Apparently if you abstain until marriage, you will be happily able to play the bongos.