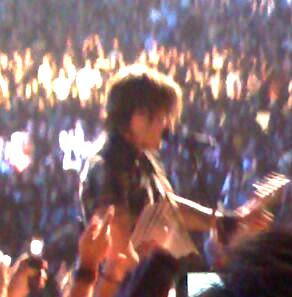 My friend from Toastmasters, Kim, had spur-of-the-moment tickets to see Keith Urban on Friday night and lucky me, she asked if I were free! As luck would have it, I had zero plans for this weekend. Like a coupla dicks, we didn’t take a camera, we thought they weren’t allowed. But then everyone was taking pictures, and Keith came to within 5 rows of where we were sitting and I had to use my crappy cellphone to at least try to capture the Magic of Keith.
Concert was right up my alley, with Sugarland opening. They both put on a great show, and Keith is cool because he walked all the way across the floor to perform on a stage set up in the back so the people with horrible seats could see him. Then, like I said, he stopped mid-way, too, and came up to our area and sang – it was cool to see him that close-up. He’s foxy.
There was only one complaint that I had about him, and it’s more of a peeve than a complaint. At one point he was thanking everyone for coming out, acknowledging the toughest economic times we’ve faced in years, and how he was appreciative for everyone “doing what they could” to get to the show. Here’s a thought: Don’t charge people $78 a ticket during the toughest economic times we’ve seen. Garth Brooks charged $18 a ticket when I saw him back in the ’90s – his position was that he wasn’t going to “gouge” his fans. So Keith, in the future, either don’t acknowledge the difficult economic times while stickin‘ it to the fans with your ticket prices, or wait til the economy picks up before touring. I’m not against a brutha making money, but don’t act like you’re all concerned about the economy and our sacrifices to get to see you. If you were, you’d take a page out of Garth’s book and make the concerts more affordable to all and take home less of a paycheck. That’s all.
On the plus side, Keith really did interact with the audience a lot, and didn’t rush off stage at the end – he swept the stage, shaking hands with fans well after the lights were up in the house.