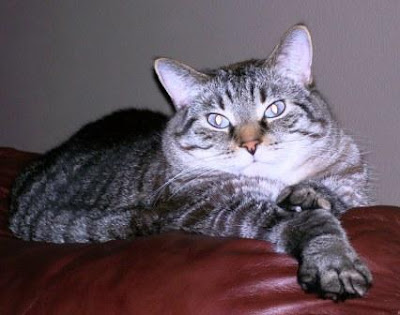 We fought a tough battle against that sonofabitch Cancer, but in the end we couldn’t pull him through. Sorry, Bubba, we all tried so hard for you. Ten is not nearly enough cat years for as good of a cat as you.

Caesar was definitely a one-man cat: Kenny’s. While he tolerated me and would allow some occasional pets and cuddles, he didn’t have much use for me overall. But his Cat Daddy, well, that’s another story. Caesar could be anywhere in the house, but if Kenny called him, he’d come running and climb up on his chest and purr. When he laid on the back of the couch, he always had to have one paw hanging over, touching Kenny on either the shoulder or resting his paw against Kenny’s face.

Is it any wonder Kenny wasn’t ready to just throw in the towel when Caesar was diagnosed with lymphoma back in May? “Treat him,” was the directive. And it was a gallant effort, with weekly trips to the cat oncologist, special foods to tempt him to eat, and extra TLC – whatever the cat wanted, the cat got.

Sadly, Caesar died on Sunday, August 2nd, 2009. We are heartbroken.