Saturday Kenny and I made our first venture to The West Side Market. I’ve been there as a yute (see: My Cousin Vinny), but hadn’t been there as an adult shopper. Kenny had never been. So we made plans to become trendy shoppers.

Of course, there was no way we were getting down there at opening hour, so we headed down according to our “morning”. I read online that there was a cafe in the building part, so we planned for a meal there as well. We arrived around 2:00 or so, and were immediately overwhelmed by the buzzing hubbub of activity. Kenny started to get a little panicky, he’s not one for chaotic crowds to begin with (unless the promise of Huey Lewis is at the end of the rainbow).

We were hungry and it was quickly becoming apparent that we needed to head to the restaurant ASAP, before we started buying twenty pounds of salami and headcheese, just because it was food. As luck would have it, we found a seat right away and ordered lunch: pulled BBQ pork for Kenny, and a fresh walleye sandwich for myself. It was really great and we were sufficiently fueled to do some sensible shopping.

The market was a lot smaller than in my mind’s eye. My childhood memory is of it being a cavernous building in which you would never find your party again should you become separated. The stand I remember most vividly is that of the Bratwurst sandwiches. It was our family destination, where we would wait in a snaking long line for our sandwich with sauerkraut, and my dad would pop to the booth next door for a fresh cuppa buttermilk, to which he always added a layer of pepper before drinking. As a kid, I wanted to try it, but really couldn’t see what he enjoyed about it – who drinks a cup of buttermilk?? With pepper? Really. Well, that was his meal, and he enjoyed it with his bratwurst. The stand was much smaller than I remembered, but it still had a gathering. It was a shame that we were too full after lunch to partake, but there’s always next time.

The trip was a little bit of a walk down memory lane, as I found the same stand still standing (hahah!) where my mom would purchase her Hungarian jams for her Christmas cookies. Still right there, all these years later.

Kenny and I kept our purchases rather minimal, tried not to get carried away. We purchased some farm-fresh butter from the stand where my father enjoyed his buttermilk, some Hungarian bread which Kenny remembers his grandfather getting from time to time, sirloin steaks which looked too good to pass up, and some fudge that is touted as the best in the area. It’s not an unwarranted distinction – it’s incredibly creamy and delicious!

Once we got to the open-air portion where the vegetables are sold, it quickly reminded me of the area where cruise ships dock – filled with merchants yelling for your attention, offering up the best deals, “Here, look here – just for you!” Quickly, a woman started shouting out her best deals on bananas and whatnot. The sign said, “4 lbs. for $2” which is 50cents/pound – same price as Giant Eagle. When I commented on that, she said she’d give me bananas, a small watermelon and a large cantaloupe for $5. Sounds like a good deal, I said okay. But. I did not get 4 lbs. of bananas, in fact, the bunch is so small it didn’t even register on my scale. I’d say less than a pound. The watermelon is just so-so. Haven’t tried the cantaloupe yet, but I have low expectations. Kenny tried to convince me it was still a great deal for $5, but since my main focus had been the bananas, to come away with far less than I wanted was irksome. Lupe screwed me. But wait, there’s more.

While we were getting $5 worth of stuff I hadn’t really wanted in the first place, she offered Kenny a deal on mangos: 4 for $2. Fifty cents a piece is a really good deal on mangos. So he purchased four of them. Today, I decided to give myself a healthy dose of vitamin c and the extra ka-pow of other assorted antioxidants promised up by the mango and discovered it was thoroughly rotted out in the inside. So I cut another one. Do you know where this is going?? Yep. LUPE SCREWED US. 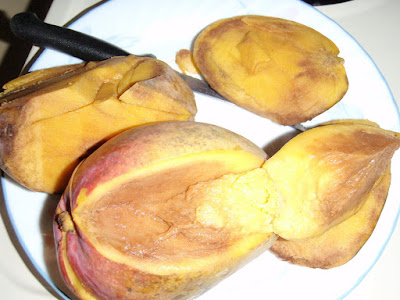 Seinfeld was right: Fruit is a gamble. One we lost when pitted against Lupe.

One thought on “Lupe Screwed Us: Part Deux”