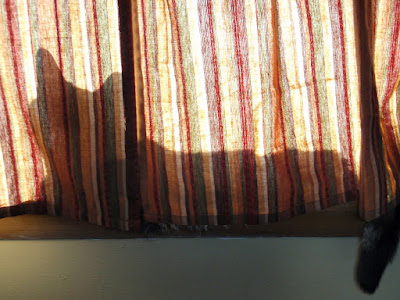 Stanley believes there is nothing better than a warm summer day and an open window.

Caesar, on the other hand, has been sick, and long story short (as my Reader more than likely has heard by now), after three different vets he was diagnosed Tuesday with lymphoma. So we’re doing what I never thought I’d be doing, which is administering cat chemotherapy to target his cancer. It’s concentrated in his stomach, and the success rate is 70%, and while I was skeptical, it does seem to be having an impact even after only two days. He’s happier looking, he’s purring, and most importantly, as the cancer in his stomach shrinks, he’s able to eat again! Small doses, but he’s definitely interested and hungry. So it’s been a pretty crazy week since Monday when we started getting 2nd and 3rd opinions, and now it’s Friday and here we are. Going into this weekend on a positive note with the cat is a happier place to be. Here he is with his little shaved paw to get his IV: 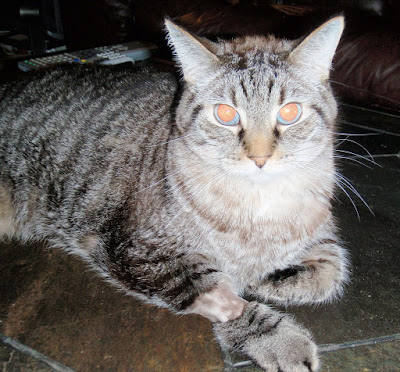 What next? Well, there has been a lot going on, but not worth getting into here. It’s not that interesting, really. I finally went to the doctor for my hacking cough I’ve had since December. He laughed that I “rushed right in” to get checked out. Well, finally figured I’d better since it doesn’t seem to be going away, there are some potential issues at work with dust and whatnot, and frankly I’m sick of coughing my ass off every day and never even having had the pleasure of smoking to warrant it.

My doctor is Old School. He does not believe in frivolous health issues. If you showed up at his office with a limb hanging off, you’d be hard-pressed to get a bandage from him. I wouldn’t have been surprised if he had suggested leeching me. Instead he gave me some sample allergy pills of Singulair. I took one, came home and promptly took a 3-hour nap with Twinkle. I hope it was just regular laziness and not medication-induced, as I will never get anything accomplished with forced napping.

I’ve got a busy getting-ready-for-vacation weekend ahead of me. I hope to post something more entertaining later, I would be saddened to leave my Reader with this drivel for a week. Bahama-bound on Monday – it is going to be a most fun girl-trip for Joanne and myself!

That’s it for now. I’m heading to bed, that 3-hour nap has plumb worn off.