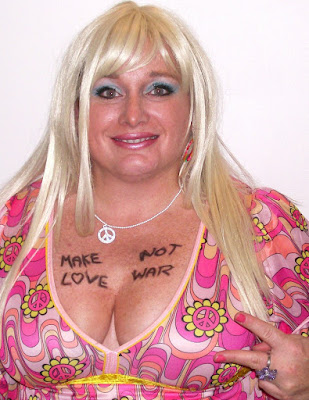 For the first time in a million years, I participated in costume-required Halloween parties. Not just one, oh, no – we went all-out and attended two dress-up parties, first Friday night, then again on Saturday. The costume that I ordered hadn’t arrived by Thursday, so I ran to the store and had to pull together an outfit from whatever was left. I decided on a “Hippie Peacenic.” It was that, a slut-o’-ween outfit, which I’m not built for, a Nun (which I am built for, but I was afraid I would go up in flames while wearing), or this. So this won. 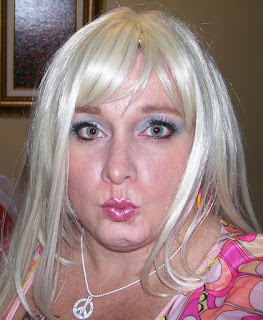 Upon review, I realized a few things.
1/In case you haven’t noticed, my tits are GIGANTIC. They are officially “Juggs.”
2/I look frightening similar to Linda Hogan.
3/I resemble a blow-up doll. Or maybe they resemble me! I have the wrong pose here to know for sure, I need the gape-mouth to really do a fair comparison.
We stayed at the party for a few hours, then headed out to Characters to meet a few other friends and have a beer closer to home. It was a fun Friday night.
As if there was any doubt to what Kenny would be, here he is in all his Indiana Jones glory. He felt very daring and fearless with a whip by his side. Twinkle, however, did NOT care for his costumed character one bit, and would hiss and run as soon as Indy donned his hat. He didn’t much care for the blow-up doll/Linda Hogan look, either, he wasn’t a fan of the wig. He apparently has hat/fake hair issues.

Katie, one of the party hostesses, was a gypsy. My outfit also failed to give me a waist, as the big puffy sleeves blended right in to everything else. It had nothing to do with the Snickers bars that were consumed. 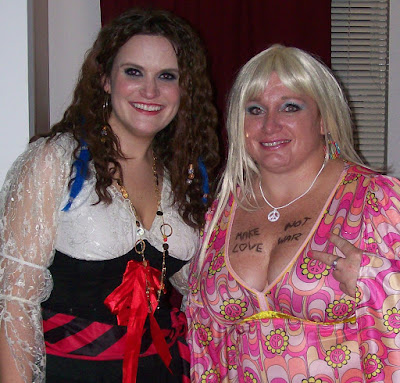 My original costume idea finally showed up on Saturday (what timing!). Well, it’s just a good thing I guess that we had another party to go to, which seemed weird to go to knowing that it was November. I’m telling you, once November hits and Halloween is officially over, it is one holiday that is just DONE – it feels wrong to drag it out even one day longer. But we did, we didn’t poop on the party.

So Cleopatra came to life. 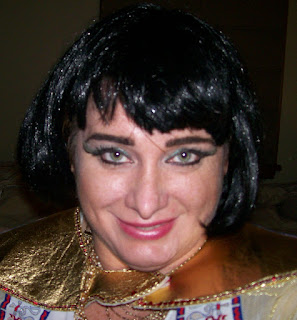 And I realized three new things:

1/ If I ever think to myself, “Huh, maybe I should dye my hair black and cut it really short!” – I need to rethink that idea.
2/ I bear a resemblance to Delta Burke and/or Liz Taylor in the Downslide Years.
3/ This wig must have been modeled after Mancy, who actually pays to get this look. I at least wear it with better makeup. 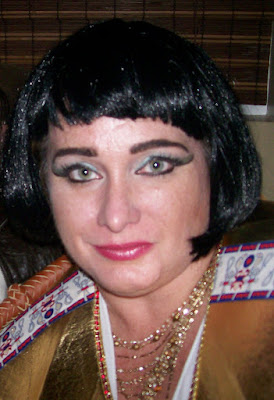 The cats still weren’t thrilled with Costumed Characters, but Cleo had to have a cat with her. Here, Widda is captured in Mid-Meep, you can see her little opened cat-mouth: 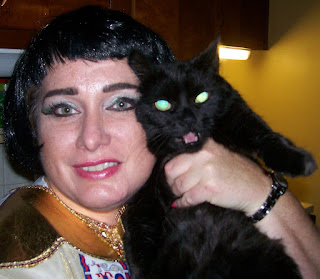 Twink was less than thrilled about a Cleopatra smoochie, but at least he wasn’t hissing, although he does look poised to chomp: 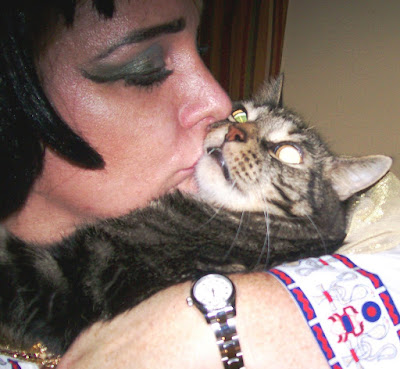 I did a pretty good job on all that makeup. I had planned to get it professionally crafted at the MAC counter, but then came to my senses, I don’t need to spend $50 for costume makeup. Years of partying in the 80’s equipped me to wield liquid eyeliner and blue eyeshadow like a pro.

Indy and his whip-crackin‘ lived for one more day: 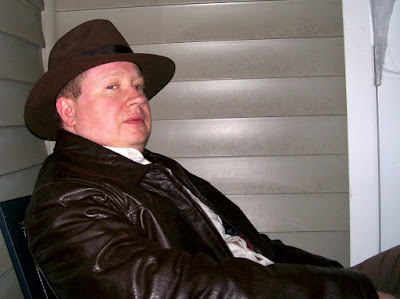 Like a house of Scrooges (mixing holidays here), we passed out zero candy this year. It’s the first time since I’ve been home that I haven’t participated in the Halloween trick-or-treatery. I was busy costuming up, and I only half-assidly (I am making up new words all over the place!) purchased treats, so we said, “Fuck It” and didn’t turn the porch light on. And it was all okay anyway.