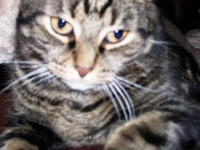 He’s so fucking cute!! I know he’s not really the cutest cat in the world – Girlie is far prettier – but his personality is so charming, I can’t keep my lips off him. I know, I know – another blog mention of Twink, surprise surprise. But once you read the rest of this, you’ll see that perhaps another picture and mention of Twinkle’s adorableness was the highlight! I’ve got very little of note to add. But here we go anyway, with words flying off my fingers.

Last Tuesday I took a gigantic cake over to Sophie’s in celebration of her 91st birthday. I feared it would be stale since I was supposed to pick it up on Sunday, but it was as fresh as a newly-made cake. That bakery is just the BEST – and cheap! It was a massively large 9″ double-layer and it was only $17.99. Hard to beat prices and taste. No matter that I have a hundred dollars worth of cake baking and decorating supplies at my fingertips from my short-lived cake decorating endeavor. What was I thinking – for under $20 I can just order a beautifully decorated and delicious confection.

Well, I did put the decorating supplies to use last week anyway, I baked cupcakes to secure my votes for the Toastmaster’s elections. I ran unopposed (maybe everyone else knew better). In July I take over the reigns as Vice President of Education for Toastmasters, the 2nd highest position held. I go for Officer training on June 21st, and it’s luckily very close to where we live, right off of Rockside. We have a fun group that I’ll be serving with, I’ve got a lot of ideas to change it up, with the intention of creating a membership database in Access to track everyones progress towards their leadership and communicator goals, and creating a website to inspire and entertain. I know I’ll be bitching about taking on the additional work, but I bitch about everything, so no matter. It’s a good next step towards my Leadership goals.

I heard from my old boyfriend Steve3, he got married last weekend! Just like that, I believe it was a simple affair. Good for him, and equally good that we both moved on from each other, he was very interested in marriage and I like things the way they are with me. I don’t need another husband anytime soon. Just a giant diamond 🙂 But I was happy to hear that he found what he was looking for – everyone should find what makes them happy.
Thursday I flew to Chicago to observe three focus groups for a project. It was a long day, with the groups starting at three and not ending until after ten, with a debrief following. The last group was a group of men, and suffice it to say, they’re not our target market. Their ideas ranged from ‘threesomes’ to ‘lesbians’ and finally ‘add more babes in the backgrounds.’ They had us laughing out loud behind the mirrored walls. Friday we came home after a three hour delay, which got me home around 3:00 p.m. I did manage to finish my book with that delay, which was a plus. I showered, napped and we headed to an event at Reddstone, a “neighborhood eatery and watering hole.” We had pizza and beers and watched the Cavs game with some people from work. It was very cool and trendy, I wish I could like that area more, we were officially in Battery Park, which is an up-and-coming trendy little area with new loft housing going in. They come with a 15-year tax abatement, but my entire body cringes at the thought of willingly moving back into the City of Cleveland. Aargh!!!! I’m not looking to move at the moment anyway, it makes more sense to stay in my free house and save for my beach house. Who can predict the future, however. Might be fun to go look at them.

Update: Just checked out the new townhomes on line, I’m less than impressed for the money. Not nearly cool enough looking to warrant giving up free house. Settles that. Beach house it is.

Somehow a bird managed to shit against the large picture window in the front of the house. How it managed to get there is perplexing. There’s an overhang, so one would think it would miss the window, but apparently not. That’s going to be a challenge to clean, I believe I’m going to have to get some of that window-washing stuff you hook up to the hose, and spray it off. This job calls for the Power Washer, but unfortunately that’s at Mimi’s house since I haven’t had much need for it in the past couple of years. Until now. Maybe a simple hose will do the trick. It’s right in the middle of the window, I can’t have that marring my view of the wonders of Parma streetlife!

Alrightie, I’ve pissed the morning away, I’m off to do something at the gym for an hour or so. Peace.