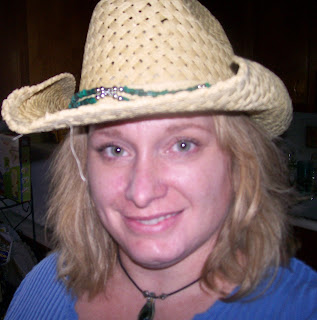 It was mulled for a good week and discussed with friends over beers at BW3’s. Could I, possibly, maybe, pull off being Hat Girl?? The purchase was finally cemented after the approval of a very petite gay man in turquoise top and white pedal pushers who proclaimed I am definitely Pulling It Off (ala How I Met Your Mother: Red Cowboy Boots episode). So that’s it. I’m going to be rockin‘ a cowgirl hat at various events. Or at least on vacation, where no one knows me. He also talked me into a $70 white linen shirt which is super-cute, the purchase of which negated my $60 perfume return, which was the original sole intent of my trip to Strongsville mall today. Well, there you have it. I did my part to stimulate the economy. I almost wanted to return the shirt before I even got it home, since it wasn’t a pre-planned purchase, but K-Man refused to allow another return today. He finally proclaimed enough was enough and he was going to rip the tags off and throw away the receipt if I mentioned another return.

There’s a pretty strong reflection, but you get the picture: $63.47 to fill up my tank. That’s as much as a bottle of perfume, for Chrisssake! Ha, ha, I’m self-mocking here, like I dare to be appalled by the price of gas while I think it’s perfectly reasonable to spend $60 on a bottle of perfume (or $70 on a spur-of-the-moment shirt). Priorities, baby. 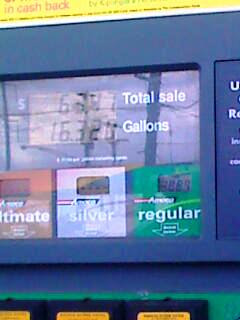 So we’re all basically working to fill up our tanks to be able to go to work. To buy the milk ($4/gallon) to go with the bread ($3/loaf), to have for breakfast before we go to work, I don’t know why I swallowed a fly…….

Twinkle had a big exciting weekend. I took him outside on Saturday and let him roam around. Well, it was carefully supervised roaming, he got to roll around on the warm concrete of the driveway, scratching his back and face against the rough surface in pure kittenish bliss. He sniffed and gawked and walked in grass. A big day for him. He rewarded me by jumping up on me in the middle of the night and cuddling up with his motor running. That is not the norm for him, he is not a cuddly purr cat. But he was last night and I loved him up for it. Today he’s eating carmel popcorn. Or more, he took a chomp out of it and then decided to throw it around the room, then romping after it. I guess that would be a chomp & romp. It’s a good day at our house.

I’m not feeling 100% so I believe I’m going to go and stretch out for a bit. I think I feel the rumblings of cramps. It’s good to be a girl.

Peace, and do something unexpected. Surprise yourself.