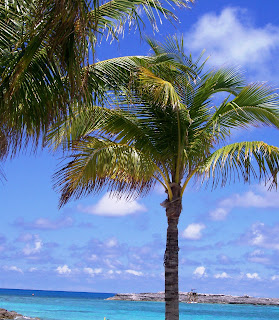 Life was fun and sun-filled for the past four days. Thursday Kenny and I were off for our April cruise on the Enchantment of the Seas for a long weekend. Even a short cruise is a great cruise. It’s official: I love the cruisin‘ lifestyle. Best vacations I’ve ever had! I totally relax and melt into the rhythm of the days.

We had a smooth flight down to Ft. Lauderdale, enjoying a whole row of seats to ourselves. They showed an inane in-flight movie, Mad Money (with Katie Cruise, Queen Latifah and Diane Keaton – I think those were the three, not sure and don’t care enough to Google it for correctness) – the movie was so bad it couldn’t hold my interest when I had nothing else to pay attention to. I tried to get involved with a book, but settled on my back issues of People that I haven’t had a chance to read of late.

Here we are on the way to Vacation, already relaxing from the week-before-vacation stressors I place on myself. Which, by the way, I’m pleased to report that I have matched every wayward sock in the house, had all laundry washed, dried and folded and the house was presentable. Kenny’s mom was coming over to kiss cats and clean litter and I had to have it respectable! 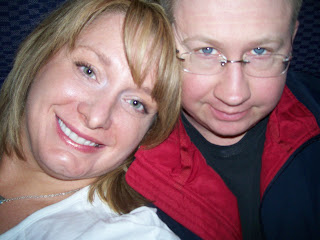 Upon boarding, we took care of the first order of business: 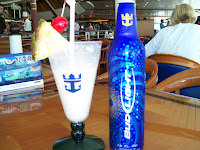 Our balcony stateroom overlooked the pier that docked the Queen Elizabeth 2. The QE2 has been afloat since 1969 and is set to retire this year. We watched her last departure from the United States, travelling back to England, never to return again. There was quite a bit of pomp & circumstance, with an orchestra on the pier giving the Queen a dignified send-off with the Stars & Stripes. Our ship was to set sail prior to QE2’s departure, but our Captain announced we were going to depart late and give the Queen her much-deserved honors and we would follow. It was a moment, pretty cool to witness. We saw her off in the distance for quite a while, until we finally ventured off on another path.

QE2 was too big to fit all in one frame, here’s her front half: 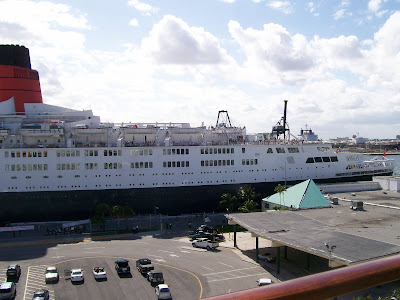 Thursday was spent at sea, with a quieter day of getting settled in to the rhythm of life on the ship. We had some drinks and had to take a nap – it had been a long day. At 8:30 we met our dining companions for the duration of the cruise, they included a nice couple with their parents and two guys who were college roommates taking a trip together. We were all on the same free cruise offer, with the slot tournament to look forward to, and so we had one thing in common right from the start. By the end of the trip I had exhanged emails with one of the ladies and Ken and I have an offer to come and stay with them for a few days before we ship out of Miami in the Fall. This was their 49th cruise. I assume they have a little bit of money behind them, they have a condo right on South Beach. That would be a fun pre-cruise trip, maybe our paths will cross again.

Thursday evening I enjoyed the Welcome Aboard show while Kenny found his spot at the Three Card Poker table. We checked out the activities offered on the ship and called it an earlier night, sometime after midnight. We wanted to be refreshed and ready to go when we docked in CocoCay Friday morning.