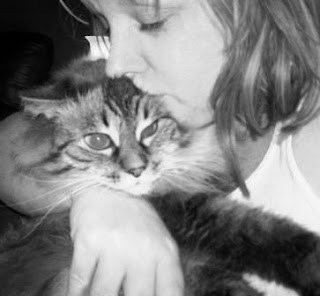 Dare I tempt Mother Nature by taking the plastic off the windows this weekend? I feel such a blatant act of the defiance of Winter will poke the Lion into another fit of Roar. Best to leave it alone for a couple more weeks.

Is it any wonder the cats run from me? I can’t keep my lips off of them. Girlie got her fair share of hugging and kissing. Stanley is my lap cat, but we have an understanding: I keep my lips off him for the most part, don’t try to hold his paws, and keep the hugging to a minimum. In return, I get a constant furry companion near my lap.

Another beautiful Sunday greeted me this morning, sunlight streaming in from the bedroom window, teasing me awake at the early morning hour of 8:30. I considered going back to bed, but then thought I’d just embrace the morning and start getting things checked off my “to-do” list. So far, I’ve broken the coffee pot filter, updated my MySpace site, added a friend to my new site Sisters Connection and took more pictures of the cats. I’m never ceased to be amazed at how I can squander precious time.
My faithful reader knows the tribulations of my coffeepot woes. Well, I’m relieved to update that my laptop wasn’t ruined after last Sunday’s debacle. Our high-tech ISD team’s solution was, “Well, turn it on and see what happens.” I laughed right at him and told him I could have done that without sitting on hold for twenty minutes. So anyway, it booted up and worked, although there is a coffee smell to it. ISD Dude told me I did the right thing by taking out the battery right away and using the hairdryer to blow out all the wet. I mused that maybe it would run faster since it was all hopped up on caffeine now.
So that brings us to a new weekend for fresh coffeemaking drama. I made a pot Saturday morning and all seemed to go well, kinda. Some weird shenanigans were going on with the filter, it wasn’t draining all the way – it was filling up too far before it would drip out. I watched to ensure the grounds weren’t running over. They didn’t, but this morning I figured I’d clean it out really well and proactively fix whatever problems were peculating. Somehow I popped this little spring and rubber thing out of the filter and for the life of me don’t know where it even came from or how to get it back together. I was still able to make coffee by leaving the lid off the pot and letting it just drip into the hole, then screwing the lid on when the pot was brewed. That method will actually resolve a host of issues and I’ll never have to worry about that cotton-pickin‘ filter spraying coffee all over the kitchen ever again. But it still irritates me that it’s not the way it’s supposed to work. My coffeepot should have it’s own Blog, The Coffee Dramas: A Life in Rebrew.

Sunshine and saltwater breezes await me in four short days. I, naturally, have saved all my house-gettin‘-ready work for today. I have an abundance of laundry to do today, as well as general scrubbing, cleaning and sorting. And I’d like to get our suitcases out and pre-packed with warm-weather wear. I’m heading off to the gym shortly, I’m sure I can lose 20 lbs. before the trip on Thursday. Five pounds/Day + Four Days = Twenty Pounds. Simple math.
If asked how my week was, it would be summed up with the word “good.” It was a good week. My presentation on Monday went really well, the team I’m working with is much less critical than my normal gang. I had enough after-work activities to keep the week busy without being overwhelming. Met with the tax man on Tuesday, we’re still trying to figure out my business situation. Hopefully he’ll call me on Monday, he doesn’t appear to be great with follow-up so far, which isn’t a good sign for a tax guy. But he’s bow-chica-bow-bow Hot so I’ll give him a few more chances.

Saturday afternoon I joined Sisters Connection for a worthwhile fundraising event. After, I bought dinner and took it to Sophie’s where we enjoyed a nice meal together and chatted into the early evening. She’s turning 91 next month. She finally went to the doctor for those pains she’s been having in her shoulder and he went over her “with a toothpick” according to Sophie. Deemed her to be in remarkable health, although he’s concerned with the amount of weight she’s lost. She’s down to 128. Considering she used to weigh about 185 – she’s always been a sturdy woman, built with plowing fields in mind – so it is a little disconcerting to see her losing weight. She tries to tell me that it’s a natural part of getting older, but I argued and told her it’s a direct result of how much she eats if there is no medical rationale behind it. I asked her to please try and have two pieces of toast for breakfast rather than one, and do some simple increases. And then I played the, “You don’t want to get sick, lose so much weight they have to put you in a nursing home to recover” card and she seemed to get it. She ate two big pieces of chicken and I left her with a large slab of apple pie. Plus the doctor told her to take Centrum Silver, which she has been doing. The dark circles under her eyes seemed to be lessened, but I’m not sure the vitamins could really work in a matter of days.

I’m off to the gym before I wile away more of the day.

Peace, and Think Spring. It’s going to be a jam-packed April, first cruise, then Dalai Lama, and golf season starts on the 17th. Need to find my swing!