The First-Ever Rob & Tracye Activity Club kicked off Saturday night at Cloverleaf Bowling Lanes. While we had many complaints about the activity of choice (including my own complaints, and I suggested it!), we had a good turn-out, with ten of us showing up to play. Everyone’s sick of winter in Cleveland and any excuse to get out of the house sounds like a good one, including bowling. Course, the majority of those who showed up have children, so maybe that was the real driver for saying “yes” to bowling.

Ever the lady, Beth dined on a chicken salad with a glass of Merlot. At the bowling alley. I bet that’s the first time they’ve EVER served that. I’m surprised they didn’t make an announcement on the PA system: “Attention Bowlers: Lane 34 is dining on Grilled Chicken Salad and a glass of our finest bowling alley Merlot. Commence finger-pointing and general mockery.” You can take the lady out of the Suburbs ….. The rest of us ate the required bowling-alley fare: pizza, deep-fried cheese sticks, big giant doughy pretzels and ice-cold beers.

To set the right mood for bowling, Beth arrived sans makeup and I myself hadn’t washed my hair since Thursday. It had the appropriate layer of hillbilly grease to give us the look of “regulars.” Man, are we stereotypical or what?? I had a slew of photos of the extraordinary bowling event, but unfortunately my computer seems to not be reading my memory card – which is going to cause me to throw my computer in the trash and buy a Mac, which is Mr. Anderson’s suggestion. SERENITY NOW.

Anyway, it was a fun night, with the Divley’s (two sets), my friends the Swartz’s, the Murdoch’s and ourselves. It was a lot of fun and now we have to pick the next event – hopefully one that will be more embraced by the girls. All the guys were happy with the bowling choice, it was the ladies who didn’t enjoy hefting a 12-pound ball around quite as much. Beth declared she’d rather give birth than bowl again. In fact, she had a rather expansive list of Things She’d Rather Do Than Bowl, including a Brazilian Wax.

My friend Dawn did ask me if I’d had a boob job, and I caught her gaze lingering on these massive bajongas throughout the evening. I think she’s regretting never taking the opportunity to “experiment” with me back when we were youths. Now she’s thinking she might have missed out on something. That’s just my theory and not based on any facts whatsoever, by the way. I really don’t know why they keep getting bigger by the day, but they do. I think I need to stop eating, everything I eat seems to turn to boob.

————————————————-
I have yet another item to add to the Island of Unfinished Crafts. My tote bag remains incomplete, the four-hour class not providing nearly enough time to create a finished item, contrary to the published declaration during sign-up. Meggan managed to finish hers up at home on her new/used sewing machine; I, however, do not have such machine and instead have an unlined, un-handled, unfinished tote riding around in the back of my car. Perhaps I can store my unfinished knitting items in my unfinished bag.

Meggan’s tote turned out really nice, below are pictures I was able to download just yesterday off the memory chip, apparently before my computer decided it just wasn’t going to participate in photos any longer. 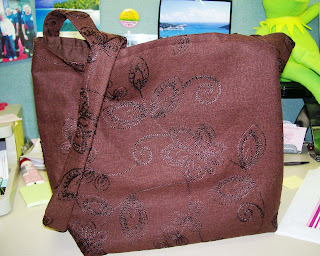 These pics were taken in my office, man alive, is my desk a mess. I need to clean up the place. It looks like my living room. Yes, that is a Kermit the Frog stuffed animal in the right-hand corner. WTF. I need to clean up.I apparently need a Work Wife as well as a Home Wife.

Cake decorating is going the way of most of my crafting attempts. I made an Easter cake for today, and frankly, if I never see frosting again it’ll be fine by me. I believe that after all the time spent baking and beating and layering and icing, I’m so grossed out by the whole thing I don’t want to even look at it. That, and I have to admit, I made the most disgusting-looking color concoction imaginable for my cake: deep golden yellow with juniper-green decorations. I was trying to “Think Easter” and had planned on creating a slew of colors to make it festive, but the frosting only went so far, so I ended up with yellow and green only. It looked like moldy sprouts coming out of the top of the cake.

I’ve only had one lesson to-date, and believe me, it shows. I’m supposed to go tomorrow, but I can’t even stomach the thought of fucking around with more Crisco-laden frosting. Everyone said the cake tasted good, once they got past the looks of it. I didn’t have any of it, I opted for Marge’s jello treat and a little square of her homemade cheesecake. Sure things, those desserts. I left the green globs of cake at her house. If I only had pictures to share….:( Anyway, I’m done with cake decorating. I can store my $100 worth of supplies in my unfinished tote, next to my knitted blanket/scarf/potholder – whatever it’s big enough to be called.

Easter weekend winds down, with the prospect of a busy workday ahead of me. It’s going to be a busy week, and I have no business complaining. I spent a little too much time last week checking out the happenings on PuddleBlog, which tracks the life of a puddle so big, it deserves it’s own blog. I’m sure there’s a lot going on with that Puddle, considering the vast amounts of rain we’ve been having.

On a last note, Linda treated Easter like a mini-Christmas for us once again – we received a lot of gifts. I got a portable clothes steamer/sanitizer, pajama pants that are super-soft and comfy (if you remember my Christmas gifts, I was laden with pajama pants then, too), body lotion which smells heavenly, money and chocolates. I feel like a five year old kid who is spoiled beyond reason. And we had my favorite strawberry jello treat, so it was quite a day.

Peace, and I hope you got your Jesus on for the weekend.