I don’t like pizza as much as I used to. We still get it occasionally, but leftovers rarely get eaten. Funny, during the time I lived alone after I was separated, that was how I grocery shopped: Sunday night I’d order a large pizza from Marcos and have a piece a night until the following Sunday. They knew me and my routine at Marcos. Maybe I just miss my pizza shop.

Burger King hamburgers gross me out – hot, greasy, slimy hamburgers. Used to be my favorite. I choose a Big Mac when a fast-food hamburger is the meal du jour. Smaller, drier patties. No large tomato slices to slide around the meat, where it will inevitably push the condiments to the edge of the bread, eventually coming to rest on the cotton spanning the chasm between my breasts.
______________________________

I called my friend Becky today, it’s been a year since I last spoke to her. She turned the keys to her Slavic Village home over to the mortgage company, packed her bags and moved to where her family lives in Crossville, Tennessee. The neighborhood – where I, too, had lived during the first years of my married life – had deteriorated to the extent it has become a dangerous, run-down infestation of crime. Becky had gotten robbed at gunpoint. The value of her home had depreciated even further from the $22,000 she paid for it back in the early 90’s. She left. She sounds really content and just happy to be with her family. I found her number by snooping on the Internet – thought maybe I’d be able to locate her daughter, Desiree, on My Space and wouldn’t ya know it, there she was! She sent me her mother’s phone number and I used my Good Friday day off work to reconnect with her. I miss her, but we lead vastly different lives. I love her, despite our differences. I miss and love her, and that will never change, regardless of where our lives take us. She and I are tied at the heartstrings for some odd reason. Very different life paths, to the extent I won’t get into revealing for a bunch of others to read about, but it felt so….stable….to hear her voice on the other end of the phone. My touchstone to my past, Becky.
______________________________

I hate volunteering. Have always liked the thought of volunteering, but the truth is, volunteering is overrated. Or maybe I’m just too selfish with my time, which is rather ironic seeing how I waste such a vast majority of it doing nothing of value or contributing to the greater good of society in any manner. Yet, that’s what I like to do when given the choice. Surf the Internet, reading useless information, blogging, rearranging my webpage, taking photos of cats in various stages of nap, watching Judge Judy lambaste Society’s Losers.

I forget how much I hate volunteering until I find myself involved with volunteering, committed. I’m on Go Green committee at work, God knows what possessed me to think that was a good idea. One person on our team quit before we even got started, now all the responsibility is on the shoulders of three. Then they gave us another area of responsibility, because an entire team quit. Now I find myself with “Eco-Homework” this weekend, putting together a PowerPoint presentation for the April event. What was I thinking? Additionally, I’ve got some responsibilities with Toastmasters, but fortunately that’s a good group that I enjoy doing things with, so it shouldn’t be such a strain. But it is still additional shit I have to do, with deadlines. My Toastmaster friend Kym told me that she believes I have commitment issues – I reject having to do stuff that “pins me down” to dates. I have thought about that and believe she’s right. I like being able to do stuff on my own time, when I want. Which may be why I enjoy blogging. I can sit around and do it on my terms. Whenever I want. So I do it all the time, with glee. Me, with commitment issues. A strong possibility.

We picked Linda up last night and took her to Whitey’s with us for hamburgers and liquor. I enjoy a Whitey’s hamburger, they have really good buns. Firm enough to not fall apart, but soft enough to not be a strain on the jaw. And they put a gallon of mushrooms on ’em, which makes a good burger just that much better. Linda had a couple of Screwdrivers, I enjoyed a couple Sour Apple Martini’s. Straying from my normal beer, changing it up. I really like spending time with Linda, she’s a good mom who loves her son. She did ask when we were getting married. Which may reflect my commitment issues. Not that I’m exactly being proposed to, but there’s just no reason I need to be married again. I like knowing I’m here by choice. Maybe Kym’ll help me work on my issues. She’s a psychic, she probably knows about my issues before I do.

Saturday night is Rob & Tracye’s Activity Club. We’ll see who shows up. I have a feeling it will be a small group – think we’re going to have dropouts before we even get started. Seems I don’t own the rights to Commitment Issues. 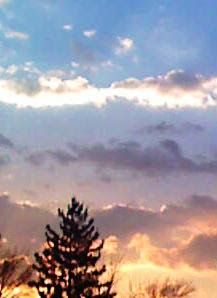 Winter offered a beautiful evening sky, the setting sun providing an ethereal effect. I have plans to see Sophie on Saturday, but Winter is supposed to give us another roar of March’s Lion and dump 3-5 inches tonight. I’m going to remain uncommitted to driving to Columbia Station in the afternoon, and opt to play it by ear. Even the obligation of visiting makes me a little tight in the chest. Hm. Smells strongly like commitment issues.

Kenny’s at the movie theater working tonight. I had thought about driving down and seeing a show, but was unable to commit to a showtime. So I sit here blogging and watching House.