Leftover lasagna and a fresh cuppa coffee for breakfast. Ah, a vacation day spent at home. I had to “use it or lose it” for my last vacation day so here I sit at home, too snowy outside to plan an outing of any great distance. The hope is that I’ll get some things accomplished that I’d like to, I’ll have to report back on the progress of that later. I’m working on self-restraint from online shopping. I have a few giftcards still in need of use, but there’s very little that I actually need at the moment and I’m reminding myself that I’m cruising in a month and a half so might as well save up for that little slice of fun.

Work is going through it’s fiscal-year-end round of layoffs. I’m not too concerned for myself since I’m in a department that is just getting established, so I have the false sense of security that they wouldn’t disassemble something that they’ve just put together again. Who knows, the only thing I do know is that I can’t sit around fretting about it. I’d look at it as an opportunity to try something new – maybe even make a big move out of state. I have to be employable somewhere. Is that also a false sense of security thinking? Maybe 🙂 I heard from the ever winding grapevine that part of the girl group, Fran, was eliminated. That’s too bad, but at least she’s not dependant on the income for survival. Those are the people that I feel for – the Sally’s of the world. When her position was eliminated, she’s her only source of income, it’s a huge impact on her life. But she turned out even better, a reminder that life plods along, and often changes that are unwelcome and unsettling turn out with an even better path to follow. Easy for me to say as I sit and continue to collect a paycheck. But I do think I know a little something about unexpected changes – and I’ve withstood the storms and come out still standing, and having even more fun and following my own interests. You just make a different path. So I’ll move to Vegas and become a Showgirl, that’s my solid backup plan. I’m quite skilled ya know. I’ve been practicing my Anyone Can Dance DVD, after all.
Today is our “extra” bonus day of the year. Doesn’t feel any different than any other day. I think it should. I think a day that rolls around every four years should have some measurable difference to it. We should get free biscuits at McDonald’s or something. Yeah, nothing says “special day” like a free biscuit! I’m going to rally for change!
Speaking of rallying for change, I’ve been in strong contact with Ms. Barbara Anne Ferris, who’s running to oust Dennis Kuchinich from his congressional post of District 10. She’s an heir to the famous Ferris Steakhouse. Kenny’s been working with her to record some free commercials for the radio station and she’s been quite appreciative and friendly. I do like her platform, I think she really wants to see some business come back to the area, particularly since she knows first-hand about having a business in a dwindling economy. She’s also very well-travelled, and she’s offered to come and speak for my Toastmaster’s Annual Party thing, of which I am on the planning committee. So here’s my due diligence – if you’re voting, Vote Barbara Anne Ferris! Cimperman sucks, he doesn’t even live in the 10th District, so if it’s not suitable to call home, you have no business governing for us. And Kuchinich – well, he hasn’t done a thing for us, he’s too busy with his younger hot wife and making his unrealistic bid for the Presidency. So there, my political soapbox has been stood upon.
It’s snowin‘ and blowin‘ out there. I think March plans on coming in like a lion once again. I saw Street Widda running down the street yesterday, another reminder that cats should be beloved indoor housepets. My spoiled pampered pets don’t know how good they’ve got it. Although they did surround me last night in bed, making it possible to pet some kinda fur at every turn.
I’m going to spend a little bit of time trying to locate a bowling alley for the Rob & Tracye Activity Club activity that’s scheduled to take place at the end of March. I only heard from 1 couple that was on my invite list, which is why people don’t schedule activities – no one really wants to get together. We all talk about it, about how much fun it would be and how nice it would be to see each other more often, but when it comes down to the nut cutting (yes, that’s the official term), no one really makes the time for it. That’s fine, I’m a party in my own pants most of the time, so I’ll have fun no matter who shows up ~ ha ha ~ .
Oh, by the way, I’m listening to my MP3 player while I blog. I’ve got ‘er up & running. I’m kickin‘ technology’s ass. My Palm still sits in it’s little cardboard box. Another challenge for another day.


Peace, I’ll update later on the progress of the day. I know, you’re waiting with baited breath to see if I manage to clean off the coffee table or not. Hold on to your hats, it may be a wild ride! See for yourself the challenge I face: 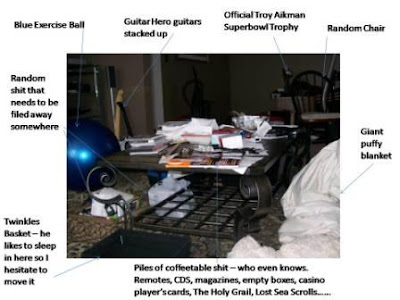