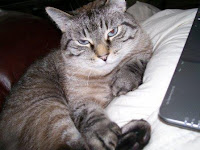 “If you were a hairdresser, I’d open a hat shop next door and retire a millionaire,” Mr. Anderson sarcastically stated.

I was trying to help him fix his hair, it got quite disshelved after his shower today, it was sticking up in all directions and I was trying to blow dry and shape it into some semblance of order. It was all over the place after I had my way with it. I think he got a bit concerned when I said, “Now don’t freak out,” and then he looked in the mirror. I was doubled-over in the hallway laughing, tears streaming down my face. I don’t know how I could fuck up short guy-hair that badly, but there it was. I’m still laughing out loud just thinking about it and his hat shop comment. I haven’t laughed that loud in a very long time.

Kenny was quite the cut-up today. I was telling him about an article I’d read in Oprah Sunday morning about the powers of meditation, and I told him he should give it a try since he’s getting a bit surly with age. He replied, “Just take a nap, it’s the same thing.” He figures he “meditates” a good nine hours a day.

It was a busy week. I had to prepare for two presentations on Friday, one in the morning and one in the afternoon. It was stressful getting prepared, but I kept reminding myself that somehow it all always gets done, and guess what? It did! They went okay, the afternoon a bit smoother than the morning, although I did have one of the directors taking a nap right in the front row. I give myself props for not getting totally distracted by that. A little lost train of thought, but not as bad as it could have been. It’s a cryin‘ shame I don’t get Toastmaster’s credit for those – I should!

Saturday night we went to our friend’s house for a birthday party celebration. The birthday boy turned 51 or so, and is recovering from neck surgery. He’s in a halo. I told him nothing feels quite as old-man-ish as turning another year older in a neck brace. Old Age is a tough old bird. Anyway, Pete’s recovering well and was able to play some Texas Hold ‘Em. We played three games, I didn’t win, but I held my own for the first two, then got knocked out quickly in the third when I went “all-in” on a full house and got my ass beat by The Mailman. I guess if I have to get an ass spankin‘, at least it was by that sexy Mailman 🙂 I wasn’t very faithful to him, however; there was a 25 year old little piece of eye candy there we nicknamed “The Kid” and I made my very dirty intentions for him known. Kenny was a good sport and let me have my fun, but The Mailman was surprised he could be so easily forsaken. He called me fickle 🙂

Anyway, by the end of three games of sexually harassing The Kid, he dry-humped me in the kitchen on his way out the door. I guess I might have taken the overt flirting just a bit too far. Although it was fun, and he was tall and quite a hard body! I’m not going to lie and say I completely objected to it. If Kenny gets the chance to be dry-humped by a 25 year old hot chick, I wouldn’t cockblock him either. Kenny said the people at the party probably think we’re swingers. Lest you get the wrong impression, it was a crowded kitchen, and only lasted a moment, it wasn’t quite as scandalous as it may sound. Is there such a thing as an innocent dry-humping?? Ah, good times.

Our vacation plans for 2008 have just taken on a life of their own. We now have back-to-back 7-day cruises booked for October, Kenny was offered a free cruise on Royal Caribbean (balcony room!) for April, and the Vegas in June birthday trip is a sure thing. We might end up broke heading into ’09, but it will have been quite a fun ride getting there. But I hope that doesn’t happen – that would just suck.

The phrase “Implied Post Coital Cuddling” was used all in a day’s work, at a meeting to discuss and code some humorous cards. I am in the perfect job, where that type of discussion is acceptable and warrented.

That’s it for this Sunday night, I have a speech to write for Toastmasters and it’s now or never. I wasn’t even going to allow myself blogging time today, but here it is anyway. Oh, a quick “Goals” update: February “Early Riser Girl” idea is as dumb as the daily sex idea. I’ve tried, I really have. I did good for a while. But then, well, it was back to 8:30 arrivals. It’s hard to go in early when I’ve worked late the night before. Well, maybe I’ll be back at it tomorrow morning. The dawn of a new day lends the promise of new hope to accomplish the things we desire.

Peace, and enjoy the week.

One thought on “Post-Coital Cuddling”