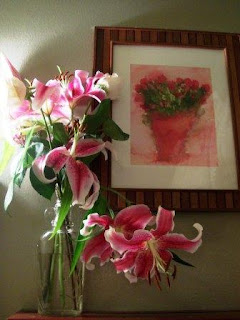 Alright already, enough with the flowers. Sheesh. It’s one little bouquet, it doesn’t need two blogs worth of mention. But here they are anyway, because they’re just so pretty. These are the lilies (and a couple of roses) I brought home and vased up for the bathroom. They are truly spectacular, my favorite flowers. The hanging picture is something I actually painted during Innovation Day at work one year. It’s a sad little pot of geraniums, but anything looks kinda nice matted and framed. So I guess I can add “exhibited artist” to my resume now! Exhibited in a bathroom, but it is officially on display. Such talent I have.

New passport photos have finally been purchased. I still didn’t want to go yesterday, I look old and double-chinned, but I figured I wasn’t going to look any younger (or probably skinnier) in the next few months so it was as good a time as any to go get ’em. Kenny said he looks like a 40-year-old man. Welcome to my world – the Sucktacular World of 40. I now have to pay another $100 for my passport because I want to officially get my name changed on it as it was issued in my long stupid married name and that is not a name I want to be associated with on anything anymore. So it’s worth the $100 for the change-a-roo. Course, it would have been free had I submitted it within a year of the name change, but I kept waiting for a good hair day, and well, here it is two years later…Ah, vanity is a shameful, expensive thing.

Sunshine + a basket of clean laundry = one irresistible cat napping opportunity. Widda found it first, and Stanley decided to join her. It’s interesting that normally Widda runs for her life from Stan, but the allure of the basket brought them together for an entire Saturday afternoon. They were both hot to the touch from the sun beating in through the window. Neither would allow anything to persuade them to relinquish their spot – not even kisses and photos. Kenny and I both stood there looking at them cooing and awwing like a couple of idiots. They were just so simply content. 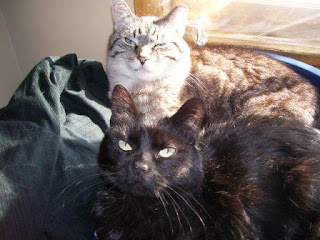 Sunday night while Ken was at the Veterans Radio Show Sunday night, I happened upon the movie Notes on a Scandal that just happened to be starting so I settled down to watch. It was really rather interesting and I enjoyed the hour and a half. My Oscar picks so far are Daniel Day Lewis for There Will Be Blood Best Actor, and No Country for Old Men for Best Movie. And Amy Whatsername for the Enchanted movie – whatever she’s up for, I think she’ll win. In case you were gonna ask me….

Spent the better part of Sunday afternoon with Sophie, she’s doing fine and looking good. We had a nice visit, I enjoyed some homemade nutroll. She actually grinds the nuts and everything, it’s quite a process. Makes the $5 the bakery charges seem like even more of a bargain, but it’s hard to beat homemade goodness. She’ll be turning 91 in a couple of months, the past year has just flown by – again.

Oh, our big news, in the event you missed the little blurb in the prior blog, we booked our tropical cruise vacation! We opted for going both weeks, like there was really any doubt. I love that vacation, why wouldn’t I want to go for 14 days? It’s interesting to me, though, that a number of guys have mentioned the concern of the weight gain with being in a cruise ship that long, and that’s something that I would never even consider as a “con”. I just wouldn’t let 10 lbs. govern my vacation – or my life. Maybe I should a little more often – maybe then I wouldn’t have the ol’ double-chin in the passport photo! Maybe I’ll LOSE weight on the cruise, I’ll be there long enough to do all the sunrise yoga classes, sunset walks, and use the gym. Ha, that even made me laugh just typing it! I will be sad without the cats for that many days, but I’ll give them extra kisses before and after. They’ll be happy to be free of me for fourteen days.

That’s it from me. I have many more words, but I don’t want to lose my audience of one so I’ll wrap it up. Oh, by the way, get ready to say, President Barrack Obama, Sir. Who ever thought that name would be President??

Peace, and show the one you love, love. It’s storming out there once again, putting on a big display with high winds, lightening and thunder.