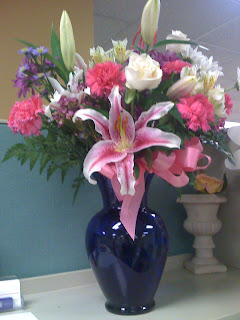 Happy Valentine’s Day to me!
For the first time in all my years at American Greetings, I received flowers on Valentine’s Day – and they were the biggest, most beautiful arrangement I saw anywhere. Yes, I scoped ’em all out and compared and mine were the best – I win! Seriously, they were beautiful, filled with my favorites – Stargazer Lilies and white Roses, not a baby’s breath to be seen. I’m not a fan of that as filler material.
I picked the lilies and roses out of the arrangement and brought them home, they are sitting in a little vase on a shelf in the bathroom, behind closed doors. Stanley wants to eat them so badly, he is about to lose his cat mind. He’s the reason I didn’t bring the entire bouquet home, he sees flowers and thinks, “Kill! Kill! Eat! Destroy!!” immediately. His nose started twitching like Bre’r Rabbit and he was on the hunt looking for the source of the smell – we watched him check out the top of the fridge, the countertops, finally leading him to the closed bathroom door.
I expect at some point today we’ll forget to shut the bathroom door and the flowers will be history. That’s what happened when I had a little vase of lilacs in there a few Springs ago. Last night I heard a loud crash around midnight and sprang out of bed, wondering just how in the hell he had managed to open the bathroom door sans thumbs, but he hadn’t – instead, someone (not pointing fingers, Caesar!) had knocked over the trashcan on a quest to lick the empty canned catfood cans. My cats never ate flowers or knocked over the trash. And to think Kenny blames all their misbehaving on my influence. Hrumpf.
We had a really nice Valentine’s week, I guess all my complaining about Kenny’s lack of wooing finally sunk in a little bit and he really stepped up. Flowers, chocolates, dinner, movies and of course, porn sex. Maybe that’s why I got all the wooing! That’s a new “Which Came First” question for the ages.
Anyway, we saw There Will Be Blood Friday night before we headed to dinner at Dante. I saw the “girls club” there at the concession counter, which figures that not only did my fucking ex-husband move into my zipcode, but now Jill is going to infiltrate my movie theater. That’s the beauty of a free country, however. Go where ya want. I do find it rather weird, however, that my ex – who could choose to live anywhere in the great big city – would move as close into my suburb as he could get. Fucking idiot. If that sounds harsh, it’s not really meant to be – it’s just still fun to call him names. And that’s another one of the beauties of living in a free country – I can write whatever I want!
Got a big day lined up, including visiting of grandparents, straightening up the house a wee bit, and Kenny has to go to his office and record some radio commercials. We’re off to take care of all that, and get new passport photos taken. We just booked our 14 day cruise vacation for October – what a fun fucking time that will be!! Kenny got a free cruise week in casino credits, so it made the 2-week vacation deal $1000 more affordable. It is going to be a fabulous 2 weeks of tropical breezes, swimming with dolphins, pina coladas and sand in toes. I feel incredibly lucky with my life.

One thought on “Woo’s Me”