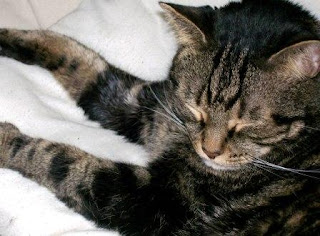 Nothing feels quite as light as a fresh start! It’s a new blog link, but the same old blogs just chock full o’ the nothingness that makes up my week. Well, perhaps nothingness is a harsh word – they’re full of something. Hopefully, they’ll be a little less full of drama going forward, now that I’ve truly severed ties with the dead weight and negativity that was swirling around me. I feel more relaxed and less annoyed than I have in quite some time. That is, after the initial annoyance of high-school drama that I experienced on Friday. I’ll sum it up briefly by saying that when I severed my friendship with Jill back in July of ’07, I should have kept it that way. She is a desperate individual with a lot of problems of her own making, and it is not something I want to be anywhere near. She’s desperate to be liked, to be right, to be praised, to be thin, to be in control of everyone and everything – sadly desperate.

Unfortunately, that effects her immediate circle of people who we both know, and were both once friends with – but sometimes there’s just collateral fallout. After my divorce, I’m experienced with dealing with it, and I understand that’s just the way it is – people have a hard time remaining neutral, I think due to a weak character. They don’t have the strength it takes to nurture separate friendships. That’s okay, I’m strong enough to deal with it and just chalk it up to another interesting facet of life and relationships. It’ll all be good book material sometime down the road, anyway!

How can I have spent Saturday washing and detailing my car, and now Sunday its 7 degrees outside?? I gave Lexi a very good detailing (good for a February in Cleveland standard), and Kenny took her to the car wash and hosed off the winter mats and washed the exterior. She was very shiny, and now today, frozen. Not frozen like Kenny’s car, however. We got up and were heading out for a leisurely Sunday morning breakfast today, and then his car door got frozen open. It took some WD-40 and a screwdriver to coax the mechanism back into action so the door would shut. We took my car and left his to pout in the driveway. It is as Sophie would say, “bitterly cold” out there. I hope she has her heat turned up to more than 58 today.

Saturday night Kenny, myself, Timmy and Tina saw a Journey tribute band at the House of Blues. Kenny wrangled up four free tickets for us with his connection down there, so I at least didn’t feel too badly when we left at intermission. I am 41 and do not like to stand for concerts. Period. I was doing really well, however, and not even complaining about it, but rather rockin’ to the music.

The most annoying part of seeing shows at House of Blues is the people trying to jockey you out of position every chance they get. I assumed a wide-legged stance with hands on my hips to keep those shovers from trying to get all up in my bidniz, but they still tried. We had nice spots close to the stage because we arrived early and assumed our position. Well, some little upstarts tried to just come in and get in front of me! I said, “Where do you think you’re going?” when they tried to push me out of the way. They said, “It’s general admission” to which I replied, “yep, and I’m standing RIGHT HERE, so get your asses behind me.” They did. Lucky for them, or they would have gotten a little lightening (right hook) and then a little thunder (left uppercut). Timmy taught me that 🙂

But Jeezus, what’s up with our society that it’s okay to arrive late and then just push your way to the front?? I guess it’s that younger generation, who also thinks it’s okay to talk on your cell phone and poop at the same time, too. Where’s Miss Manners??? I think we need to bring her back!! Oh, yeah, as an aside, the singers in the tribute band were OLD – if they weren’t bald, they were totally white-haired. Man alive, the music I made out to during high school is being paid tribute to by a group of old fuckers.

Kenny and I had a lengthy discussion about tribute bands. I said I think they’re a little bit sad – spending their lives thinking they’re “cool” but really they’re not cool enough to be original, they’re just copying someone else’s talent. I told him I’d be a little bit embarrassed if I was dating someone who thought he was “all that” and really he was just a copy-catter. Kenny still said he’d be in a tribute band if someone wanted him to – and I said that would be okay, but I’d still make fun of him. He likened it to my liking a fake Prada purse, to which I don’t really see the correlation, but I do enjoy a Fake Prada so I guess he can enjoy Fake Journey if he wants to. He said he’d be Fake Phil Collins or Fake Neil Diamond if he happened upon the opportunity. And of course, Fake Huey Lewis goes without saying.

I called our cruise coordinator over the weekend and have some vacations on hold. We need to make a decision on the one week or two weeks. It’ll probably end up being the two weeks. I could really love 14 days of tropical bliss. I just need to keep Mr. Anderson’s casino time limited if we do 14 days, or he’ll be in the poor house. He said, ‘‘What else is there to do?” That, my friends, is exactly why he needs to be part of the Rob & Tracye Quarterly Activity Club. Maybe he’ll develop a few new interests! Not sure what will translate to cruise activities, but maybe something will. Read a book! That’s what I’ll be doing during the days at sea – I loved that! Me, a good book, the beautiful breezy saltwater air, and the drink of the day. Bliss, oh heavenly bliss!

Other than seeing Michael Clayton today, that about wraps it up. Kenny has been just teeming with ideas for new business ventures since he has an office to work out of, and I do believe a few things may turn out to be somewhat profitable. He is formulating a plan to rent out karaoke systems to various bars, and he has two interested partners. So who knows what might develop – maybe he’ll be able to spend 14 days holed up in a casino by October! He’s been working with my little brother lately, too, getting him a little bit of business lined up on the side so he can make ends meet a little bit easier. Chucky, I think, has enjoyed having someone like Kenny to really talk to about Ebay business stuff and they seem to be getting along pretty well. I’m happy; Chucky needs a friend or two. We all do. But the key is to be selective and not share yourself with people who drain the light from your being. That’s a life lesson that I hope I’ve finally learned.

Peace, and cherish your time – it really does fly by!

PSS – Regarding my Something New for February, I’ve decided to embark on being an early riser for the month of February. So far it blows bagpipes, but I’m going to give it a full month just to see if it’s as overrated as I think it is or if I really do get more out of the day by getting a jump on the worm.