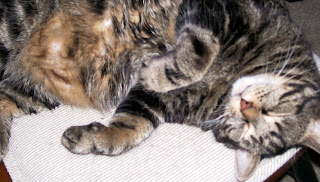 Superbowl Sunday. Hoo-rah. Yes, I’m half-heartedly watching, one eye on the television when something shiny or flashy catches my peripheral vision. I’m multi-tasking. Blogging, reading, whatnot. I just started – and finished – a book today, Derailed. Yes, the very same movie with Jennifer Aniston. I never saw that, so reading the book was all new for me. It was quite a page-turner. I had expected greater things out of my day, but the book got ahold of me and I barely left the chair. So now that’s done and I can move on to accomplishing some stuff. Or I can just continue to sit in the chair and piss the rest of the night away. Which is what will most likely happen. Hey, nothing’s actually expected of anyone on Superbowl Sunday other than watching the game. Everyone’s downstairs at Timmy’s watching the game, I wasn’t volunteering for any parties up here because I just didn’t need the pressure of a clean house. So there. Not that anyone asked – but I was firm in my stance regardless.
Over the weekend I enjoyed Girls Night In at my friend’s house. It was a really good time, five of us got together and got to know each other a little bit better. We drank a good six or seven bottles of wine. Gabbed and chatted and ate and drank for six solid hours. The usual fun girl get-together stuff. When I arrived at the house the first thing that greeted me was a giant nipple on the television. Sex & The City DVD’s were running – the perfect background for Girlfest.
In my ongoing quest to add newness to my 2008, Rob and I headed up a Quarterly Activity Club. That’s the best name we came up with – how sad. My personal motto is, “I put the F-U in FUN!” Pretty catchy, I guess that used up all my creative juices. So anyway. we asked a small group of friends to join us as we embark on trying new things four times a year. The first get-together will be simple and semi-harmless; we’re going to have a bowling night. We’re planning a bit more adventureous things for the rest of the year, but didn’t want to scare anyone off with horseback riding or dance classes right out of the gate. Let everyone see how much F-U N it can be first! I’m sure people will be clammoring for membership into the group once word gets out! Kenny has said he’ll be happy when this idea dies on the vine and I move on to something else. He’d like to be excluded from the group, particularily once bike riding in the Metroparks was mentioned. Well, a little outdoor activity will be good for him, he just doesn’t know it yet!

The tornado-intense winds of the past week knocked my uninhabited birds nest out of the crook of the gutter by my back porch. I was very sad when I discovered it face-down in the driveway by the garbage cans. I asked Kenny if we can try and wedge it back in place, he’s not convinced that’s a good idea. He would hate to stick it back up there and have another strong wind come through and knock it and a houseful of babies to the ground. But I want another little family of birds to watch this spring. I hope another little family comes back and those crazy winds cease.

I’m scheduled for a Toastmasters speech at the end of the month, I need to spend less time blogging and more time writing something to blab about to that group. Not sure what I’m going to talk about, maybe blogging. Maybe. Always hard to come up with the topics and write the speeches. Which is why I only completed two last year. Although I do participate a lot during the meetings, so that counts for something. We’re having a Fat Tuesday party celebration this coming Tuesday, I need to come up with some food item to take to that.
It seems like that’s all I’ve done for the past week. I was busy planning a co-workers baby shower (Kenny wants to know how in the HELL I got nominated to host a baby shower, seeing that’s not exactly my first area of interest), and I spent the past week planning, organizing and hauling food around. The shower was pretty nice, I think, considering it’s a work shower in a conference room. And it was the perfect occasion for a Becker’s Cake, which I picked up and fully enjoyed eating. That was certainly the best part of the shower – the cake! Oh, yeah, and seeing the mother-to-be’s happy glow, blah, blah, blah. Really, it was the cake 🙂 I’m taking over her caption for her when she goes on maternity leave in a couple of weeks, so I hope that’s a good change – something different to do for a couple of months at work.
That’s about as exciting as life’s been for the past week. I need to call my grandmother sometime tonight, it’s been two weeks and I’m sure I’m on the Bad Granddaughter list by now. The days just go by so stinkin’ fast – it’s two weeks before I know it. As an aside, lest anyone think I’m exaggerating the extent of Sophie’s …. frugalness, her heating bill for the month of December – in Ohio – was $11. Even with a wood-burning stove, that’s just crazy and she must have had that heat set just high enough to keep the pipes from freezing. Well, what I can I do. She’s lived 90 years, I guess she’ll just do it her way. Cold or whatever.

Peace, and stay warm. Twink, I think, has been fighting a cold this week and has been sleeping his cat-ass off – even more so than usual. Conked out where ever he lays. So of course I annoy him by taking a multitude of photos – he’s just so stinkin’ cute! 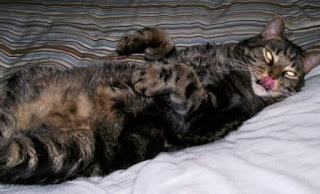 UPDATE::: I WON THE FINAL SCORE SUPERBOWL SQUARE – HOORAY FOR ME!!