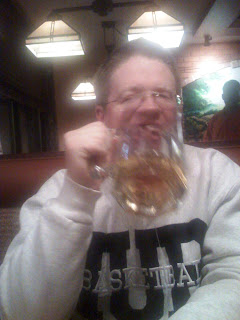 Kenny’s head got swallowed by a giant mug o’ beer Saturday night. He successfully fought back and was able to conquer it.

Another week of cold, snowy January has passed. It was a rather ordinary week, all-in-all. I had an informal presentation to prepare for at work, which went fine, overall. Always room for improvement, as I’m often reminded these days. I have my work goals that need completed by the 1st and I haven’t even looked at them yet. I figure I’ll whip that up quickly and not spend too much effort on it. All just corporate formalities.

A very large group of girls headed to the movies Thursday night – it was quite fun to have the gang together again! Meggan, Sally, Fran, Geri, Chris Jill and Marlene were able to join the festivus. I took a very rushed picture, resulting in a partially-obscured Marlene and a partially omitted Meggan. I never claimed to be a professional….photographer, that is :^) 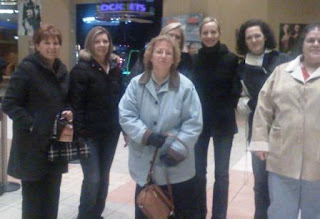 We saw 27 Dresses, which was the typical chick-flick fluff movie. Kenny used his movie privileges and rounded up 8 free tickets for us – hooray! The movie was enjoyable enough, but I don’t understand why they had to “ugly up” Katherine Heigl’s character. And by ugly-ing her, they just gave her an unflattering hair color. And her cute, man-attracting sister was the stereotypical bubbly blond airhead.

Marlene did what she does best at the movies – cried and cried! Seriously, there was very little – if anything, really – to cry about in 27 Dresses, but she didn’t let me down. I love, love, love to go to the movies with her because of that crying. So then, of course, during the touching moments I was laughing out loud because WaterWorks was in full swing. That, and Jill teasing Meggan about some sci-fi triller that’s coming out – we obviously like to laugh at the expense of others.

January seems to be movie-month for me – I’ve spent a fair amount of time inside the theater as of late. Yesterday in the early evening Kenny and I went to see that new thriller, Untraceable. It was pretty good, but I’m now officially movied-out for at least a couple of days. After the movie we went out for big-ass beers and margaritas.

Sunday we went to Kenny’s new office building and I painted his main office room for him in a nice medium grey. It was electric blue – a little bit jarring on the eyes. So I took care of that for him while he put together some tables he purchased from Marcs. They had a very large selection of office furniture at bargain-basement prices. He purchased a really nice desk (it’s all Sauder, so it’s not as if it’s handmade Amish furniture, but nice enough), some tables and storage cabinets, all for under $100. The self-assembly may make it seem like less of a bargain by the end of the week, but so far so good.

January’s drawing to a close and I haven’t tried too much new stuff yet. The Mailman, Kenny and I went out for beers on Friday and chatted about life and stuff. It appears I’m the only one who isn’t content. The Mailman and Kenny both agreed they would be perfectly happy doing what they’re doing today ten years from now. They told me when I’m done with the Cleveland Rowers Association, writing a book, climbing Mt. Everest and competing in Triathlons, they’ll have a nice cold beer waiting for me at Mo’s bar – where they will be the whole time. So then I had another beer, because that sounded pretty good, too.

Not sure if this counts as new stuff for the month (Meggan seemed to think it did), but I actually pooped in a public venue. After second thought, I am going to count that as a new thing for the New Year! I have serious pooping issues, which the Mailman, Kenny and I also discussed over beers. I cannot “get in the mood” if any of the participants (in this case, myself and Kenny) have recently pooped. I need a lenghty period of time to pass, sort of a buffer zone.

So Mailman delved a little deeper into the issue to find out why – and we discovered that probably a lot of it has to do with my ex-husband’s less-than-hygienic bathroom habits. He followed a “wipe 3 times only” self-imposed rule. And it showed – and smelled. I can recall lying in bed with him and smelling poop – he clearly hadn’t cleaned himself too well that day. There was no way I was going anywhere near that area. If I had been wearing Fecal Glasses I probably would have slept in the guest bedroom! Good Lord, I cannot believe I ever was married to that! So over beers, we counseled me and got to at least a partial root of my issues.

On that too-much-information note, I’m out for the night. It’s been a too-quick weekend and I need to hit the hay – it’s going to be a busy week starting in a few short hours.

Peace, and live a fun-filled life this week! February is fast on January’s heels!

P.S. – RIP, Heath. I’m very surprised how quickly People magazine had that on their cover – delivered to my doorstep 3 days later.