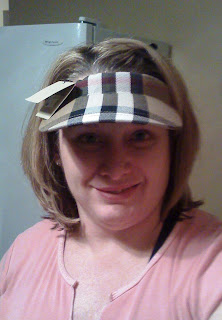 Merry Christmas to Me! Monday night the girls and I planned for our annual Holiday nice meal together. Normally it’s an extended lunch at Macaroni Grill, but with my hectic and unpredictable work schedule of late, we made arrangements for dinner at Carrabba’s after work on Monday instead. Jill was unable to make it at the last moment, but Fran, Geri and myself were still able to get together, so we did! We had our gift exchange, and I was the very lucky recipient of the Burberry golf visor pictured above. How stinkin‘ cute is this??! I will be very fashionable on the golf course next season, with my Burberry accessories – I have the Burberry towel that Jill gifted me with last year. I’m very stylish! Hey, if you can’t play good, at least look good! So anyway, I was quite excited and needed to give the hat a special blog of it’s own!

Meggan brought over her annual tradition of lottery tickets. She potentially gave me $250,000 – that was the grand prize. Instead I won a dollar, and I was happy enough with that. It was very cute that she still included me, even though her gifting of the tickets is usually reserved for bowling participants – but she grandfathered me in anyway.

Mimi gifted me with a Bonnie Bell lipgloss. We have a no-exchange rule, she has enough kids and whatnot to buy for without worrying about me. But even with the rule in place, I still got her a little something, a mascara named Big Tease from Sephora. She was excited. Only girls would exchange makeup and be excited about it!

I am happy to report that I have closed in on my Christmas shopping – I have it almost under wraps. I gave Kenny his gift tonight, it’s a ceramic heater that he needs in the garage for when he’s working out there in the cold. I really wanted to save it so he’d have something to open, but he’s going out there either late tonight or early morning and I was worried it would just be too awfully cold so he got it early and unwrapped. But he was quite thrilled, and very appreciative to have it early.

Kenny’s coat is ordered, but it won’t make it here until, well, who really knows. There was a snafu with my Capital One No Hassle credit card – it was quite a hassle. They declined the charge for “fraud” concerns and never notified me, so the folks in London just didn’t start the order. I looked like a bad credit card giver, so they didn’t even bother contacting me. I found out the troubles after a follow-up email to confirm all was well, and it wasn’t. So after my head nearly exploded while on the phone with Capital One, they set my account up for “overseas travel” so when the order from London came through, it would process. This is the same credit card that declined my purchase in Cozumel in September. They decline all my purchases. I’d cancel the whole card, but they have a very low 1.99% interest rate. Of course, they can offer very low interest rates if they decline all my transactions! They can offer to GIVE me money for every transaction, but then never actually make good on it, because they flag them all as fraud. Hell, they might as well do that – it would be one great marketing program. A MILLION DOLLARS FOR EVERY QUALIFIED PURCHASE!

Peace, I have to go wrap up a “zoink” for a White Elephant gift exchange tomorrow. Nothing like waiting til midnight to take care of that 🙂