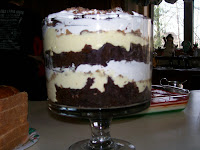 There is so much to say, and I’m currently hampered with my normal effusive writings. Let me backup….
My computer power cord has decided not to participate in it’s job any longer. It just up and quit on me two days ago. They don’t sell them in any of the stores we tried on Monday, so we’ve ordered one off of Ebay, which naturally hasn’t arrived yet. I feel like Edward Scissorhands without his scissorhands – I feel incomplete without my laptop stuck on my lap! My fingers are motionless, except for some random cat scratchings. At present, I’m using Kenny’s computer to bang out a few words and get my “fix,” but for the most part I was just letting my reader know that I can’t post. It’s just not the same on someone else’s computer.
Anyway, instead of using the few moments I have to write something of importance, or recognize someone special, I have instead decided to post a picture of the fabulous dessert I made for Christmas day. It’s Meggan’s famous Triffle, although I made one switch to vanilla pudding rather than chocolate, just to put my own stamp on it. It was quite a hit and I left the remains at Marge and Stanleys for the out-of-town company that arrives on Wednesday. There was almost a triffle-incident; I couldn’t find my brand new triffle bowl that I purchased from Pampered Chef just so I could make this particular dessert. I hid it from myself pretty good and I had to do quite a search around the house until I found it, nestled in a cabinet above the stove. I never put anything up there – what was I thinking? Well, apparently I was thinking, “there’s plenty of room up here, I don’t store anything up here – I’ll store the triffle bowl!” You can kinda see behind the triffle one of Marges jello treats she whipped up – no holiday is complete without something from the jello family.
Here’s the holiday rundown in a nutshell:
Saw Sophie, Melinda and my nephews for an early supper and gifting on Sunday. Enjoyed the day very much!
Monday we visited with Kenny’s other grandmother and family. Kenny’s grandmother Helen has become bedridden since we last saw her in the spring. It’s rare that one rebounds from “bedridden” – it’s looking grim in my opinion.
After visiting there, we headed over to Dan & Bevs for a later-evening open house. Very good time, Timmy and Kenny watched the football and won their Fantasy Football championship – a $610 victory!
Today was Christmas and it was quite nice.

Kenny got me a really pretty watch and some misc. stuff.

I bought him Rockband for his Nintendo 360 (I think that’s what it’s for, if not it’s one of those gaming units he has), plus some miscellaneous stuff. We had an early dinner at Marge & Stanleys, opened BAGS of stuff – crazy amounts of stuff! It’s all just sitting in the living room, I’m not sure what in the world we’re going to do with everything. We’re very spoiled, for sure. This evening I met my little brother Chucky at Cinemark, Kenny left tickets at the window for us, and we got to enjoy Sweeney Todd together. We both gave it a 6.5 or 7. We liked it, but I’m not sure if it’s Oscar worthy for me. So it was really nice to see him – it’s been at least a year and a half. He looks good. Asked me if I’d had a boob job. I told him it’s all God and Oreos.

The good thing that happened with the demise of my power cord on my computer was that we were trying to fix it and moved the couch and found the digital camera. I’ve been snapping pix like crazy, but alas will have to wait to post them. I need my own programs. I have some really cute pictures of Twinkle in my Christmas tree. It’s 1:00 a.m. and I have to work in the morning, so I am logging off and heading to my very puffy bed. We purchased a “resort-style” mattress topper and it’s next to heaven – both in softness and in tallness. I have to take a running leap to get onto the bed, it seems! Kenny’s afraid he’s going to sit up and get his head lopped off by the ceiling fan. If that happens, I’ll be sure to post pictures!

Peace, and I hope everyone had a blessed Christmas with those they love! 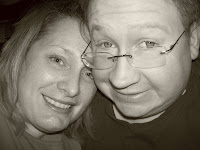