The much-awaited long Labor Day Weekend has arrived, announcing the informal transition from Summer to Fall. For all intents and purposes, it’s Fall. Stanley the Grouchy Neighbor has even pulled up half of his garden already, his tomato plants looking as straggly as mine in spite of his consistent watering. Ha, suck-ah! I won’t pull mine up until probably after the cruise, they are still producing some tasty treats. I find it interesting that I haven’t had one green pepper off the vine and it’s September. How long do those damn things take to grow?! Well, it was a garden test I guess, and it didn’t turn out to be very profitable or rewarding. But like all things (tanning, fake nails, marriages, fad diets, gym memberships), I’ll probably try it again next year. The Optimist persists.

Sunday night brought a 70’s flashback, chock full of swooning and girlie yelps for attention as 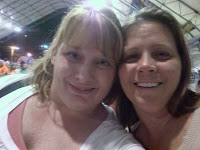 Melinda and I attended the Donny Osmond concert at the Tower City Amphitheater. Donny was the entertainment for the Sunday night Taste of Cleveland weekend event. I called Melinda early Sunday morning to see if she was interested and she didn’t even hesitate – she was In like Flynn. Whoever Flynn is. They had a lot of tickets available so Kenny suggested we wait til we got down there to purchase them, on the off chance they had some front-row seats available at the last minute, or better yet some free seats. I didn’t see much chance of that happening, but the tickets were $35 with an additional $9.10 for Ticketmaster’s handling charge. That’s pretty expensive for Donny, but I guess it’s the price for Puppy Love. That Puppy’s still lookin‘ pretty doggone good for 50! 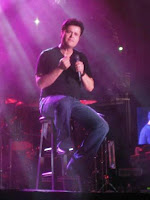 As luck would have it, the gal at the ticket counter DID give us free tickets – not front row, but really great seats a few rows back. What are the chances of that happening to me? I thought zilch, and was proven wrong! Kenny had dropped us off down there in between his gigs at the movie theater and the radio show, and then he came back down just in time for the start of the concert. The lady was nice enough to give me 3 free tickets, so we all got to sit together. A woman in the row in front of us was by herself and we got to gabbing and she had to pay for her ticket – she purchased it about an hour earlier than we inquired. Goes to show, just wait an see sometimes if the shows not sold out. He rocked it out for just over an hour. He was tired then. Guess it’s harder to put on a long show when you’re 50. I wish he would have came out in a white jumper, the likes of which he wore back in the day – that would have been classic! He did play some of his old records, which was fun, and he had a lot of snapshots on the big screens of the Osmonds back in their hayday – what a flashback! Plaid vests, Elvis-type jumpsuits, paisley shirts – just all-over loud clothing. He wore normal (aka boring) stuff this go-round. 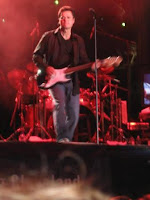 So we Tasted Cleveland and listened to Donny. The very best part of the night was when I got carded buying beer! That’s twice in the last month. I think those microdermabrasion treatments must be working. That, or it was getting dark out and she had poor eyesight.

It says ATTENTION: MOSHING MAY TAKE PLACE. BE AWARE OF YOUR SURROUNDINGS. MOSHING AND ENTERING A MOSHING AREA MAY BE DANGEROUS & IS AT YOUR OWN RISK.

I was glad for the warning, because when that Mosh Pit opened up during the Donny O concert and I entertained the thought of body surfing, that warning came to mind and I JUST SAID NO to moshing. Might have saved my life, or at the very least a few teeth. Those old ladies were wild. Many of them were waving around their Donny dollies they had purchased from the Marie Osmond collection and it could have just gotten out of control with those doll parts flying around.

Today we labored. Kenny and I cleaned the basement, making some much-needed room down there. We spent a lot of hours down there, and did a bit of work in the garage as well. There is still just so much shit, it’s indescribable. We do try to get rid of stuff. We leave a porch full of stuff out every month for the Vietnam Vets. We have a new batch ready to go for September. I have plenty of my fatass cheater ex-husband Fsteve’s stuff that is at least going to a worthy cause! I open boxes of stuff up and am always surprised at what I find – usually some crap that was his at one time. Today we found his waffle maker – we decided to keep that. I also found some hair clippers I was sure I didn’t have (oops!) and a bunch of music cd’s I didn’t realize got packed. Oops again 🙂 Well, I’m sure the Vets will appreciate the stuff!

As a reward for our hard work we enjoyed a free early-evening movie. The free part is GREAT. We saw Death Sentence with Kevin Bacon. It was a very dark movie and I welled up on more than one occasion. It left a very heavy feeling. It was good, I guess, but definitely not a feel-good movie at all. Not even the end. It was harsh. Geri wouldn’t like it.

Meggan spent last weekend shopping for bric-a-brac and dining on homestyle cookin‘ down in Amish Country with some of her family. They took a girl trip to celebrate her mom’s 60th birthday and spent the night in a little hotel in the heart of it all. They shopped at Lohmans and Meggan bought the best purchase ever – some chain thing you put in your piecrust while it bakes to keep if from shrinking. One more reason I will make her my bride: she puts a lot of thought into her pie crusts. Delioushness doesn’t just happen by chance, ya know.

While cleaning the basement I found – for the 2nd time – pillows for my old and Anastasia’s new couch. I need to bring those in for Meggan to deliver this week – not tomorrow, I’m already loaded down like a pack mule with DVDs for the United Way sale at work. I found a lot of crap that wasn’t mine and it would make great donatable stuff. Wonder where it all came from. Hm.

My grandmother Sophie joined Melinda, my nephews Trevor and Justin, and myself at Olive Garden for lunch over the weekend. It was fun to meet in a different venue, not just sitting around the kitchen. I’m sure she’s still replaying the cost of that meal over and over in her mind. She could have bought a month’s worth of groceries at Aldi’s for the cost of that meal.

Tuesday night Geri and I both had hair appointments at John Roberts in Solon at the same time. I had saucy Sarah and she had Sheree, who does a good job and is a good back-up option when Sarah’s not available. Sarah has to be booked well in advance, there’s no last-minute appointments with her calendar.

After our appointments we headed over for a later dinner and headed over to Applebees. We passed an outdoor patio and since the weather was perfect for patio-ing, we headed on in. I had been looking at the menu for a good 15 minutes or so and then asked why Applebees would have a drink called a Romarita. Well, they wouldn’t but Tony Roma’s would – which is where we were. Apparently I don’t always pay attention. I thought it was the fanciest Applebees I’d ever seen – I chalked the fanciness up to being in Solon. It was evident that the hair dye must have seeped in deep on both Geri and I because quite some time passed and we were waiting on our food and realized we had never even ordered. We had told each other what we wanted, but that’s as far as it got. The waitress was a little lax. Well, we had a nice long leisurely evening and a totally awesome pulled chicken BBQ sammich. We’ll be repeat business for that sometime.

I let Twinkle outside today, keeping a very careful eye on him, and now he won’t stop meowing at the door. I created an outdoorsy monster, and he’s driving us crazy. But he does have a very cute meower.

There was much, much more to the week, but this is it for this blog. It was a nice long 3-day weekend, I could use about 6 of these weeks in a row and would finally be able to catch up on stuff. A little at a time.

Peace and have a joyeously short workweek.