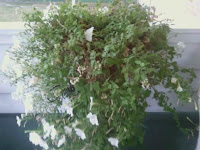 By August everything begins to look tired. Summer smells like it’s drawing to an end and the plants seem to take their cue, refusing to maintain their bouncy facades from Spring. More straggly, less lush, less blooms. They sense the end is near and quietly being the end of their season. I imagine I could fertilize them again, try to coax them back, but I’m tired too, and will end the struggle and let them fade away, beginning anew next Spring. One of my florals stopped trying sometime in early July; there was no real reason for it, she received as much water as the rest of ’em, but one day I came out and she had turned brown and brittle, seemingly overnight. I’ve kept her in the pot since then, a quiet reminder that sometimes things require more than a simple effort to keep them thriving. She obviously wanted more than a once-a-day-watering, but not knowing what that was – and not wanting to participate in more – I allowed her to slip away. Now Twinkle likes to come out onto the porch and chew on the brittle branches, and I let him. A dead plant to one is a nice whisker-scratcher for others. 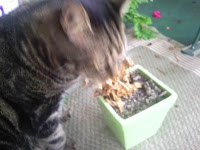 And thus the season begins to wind down.

While the plants appear to be winding down in some aspects, they are just getting started in others; the vegetables are offering up their bounty. With “bounty” being used in the loosest sense of the word. I’ve received a straggly offering from the tomatoes so far, with an occasional ripe grape tomato or a very small fruit from the Golden Boy plant. 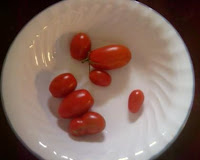 All that effort spent turning up the earth for this.

There’s a church on State Road that annoys the holy hell out of me for some reason.They consistently post the absolutely dumbest messages on their bulletin boards, some convoluted retarded-sounding snippets of supposed wisdom that is supposed to make me want to turn right into the parking lot and go repent. Instead, I carry those nuggets of wisdom all the way home with me, all the while twitching with annoyance at their sheer stupidity. On some level, they’ve done their job: I think about them long after I’ve passed by. But the greater job of inspiring me to a holier state has failed. This week’s posted message goes something like this:

What the fuck does that even mean???? Seriously. They’ve also had this one recently:

You fix your mistakes with duct tape. God used nails.

What??? What??!! What does that mean???! I get the whole Jesus was nailed to a cross inference. But what is the message??? Good Lord. Kenny is by now used to my rantings about the Jesus Board, as I call it, and always enjoys my angst as I go on a rant regarding the sheer stupidity of these messages. Maybe it does do it’s job after all, because I do a lot of praying for whatever dumbass comes up with that stuff.

Kenny’s putting together tonight’s radio show. We’re (well, he) is going to have an hour and a half thing after the first of the year, called That’s Entertainment or something along those lines. I want to have a 10-minute segment on that one, with girl-focused activities and events to discuss. I need to map out the thought, but there’s something there that could be fun.

My dreaded speech-week is over – hooray for me! They all went really well, particularly my Icebreaker speech for Toastmasters. I had the crowd engaged for my 7 minutes, and got a lot of really nice feedback. I was worried about it, since I had to talk about myself, but not the normal stuff I normally blather on and on about, like my pooping phobias and my ginormous post-surgery vagina. Speaking of which, that thing never did snap back down into it’s pre-surgery teensy cuteness. It’s like a super-sized value meal now, and I seriously think that’s a disclaimer they should tell you about: Extra-large vagina’s may occur.

The whole weirdness with the girl-group is still a factor. I find it to be another interesting facet of life that Jill pulls some “gotta find myself” crap and my life has to be affected by it while hers skips along without missing a beat, but that’s the way it is, I guess. I imagine I could have just ignored her bullshit like everyone else, but I’ve never been good at that. Maybe that’s why I’m in a perpetual state of struggle in life – I just can’t let things be. It would really be so much easier if I could, just let everything go on around me rather than speak out and have my routine out of sync. I think about doing that. But then I think God maybe wants my picture on his refrigerator, but maybe he doesn’t have any duct tape to hang it or something. Was that what the message on the Jesus Board meant?? Well, whatever.

I watched a new show (new to me) today on the Science channel, something called SurvivorMan. It’s this guy who gets dropped in really remote locations and then has to survive on his skills and the land for 7 days. It was good enough to Tivo the upcoming new season. I learned that if our cruise ship sinks next month and I end up on a deserted island, that drinking coconut milk alone will give me diarrhea and that should I be fortunate to catch a conch, only eat the white parts (okay to eat raw) and some squiggly transparent rod known as the “style”, which is a male energizer. And thus a rainy Sunday afternoon was wasted.

Twinkle has gotten quite accustomed to spending time with me out on the back porch, but he does not like it if I go inside for any length of time longer than the time it takes to pour a can of soda in a cup, add a bendy-straw and return to the porch. Longer than that and he gets very apprehensive and cries to come in.

But while we’re out there together he is very good with not trying to walk the railing and he quietly lays down and enjoys the Dog Days.

We had a wedding to attend yesterday for a girl I met once (but we are friends with the parents), so I decided to find a place in Parma to give me “party hair” after I picked up my dry cleaning in the morning. I pulled into a place boasting “Parma’s Finest Hair Salon” but there seemed to be a trickle of men in there and I didn’t even go in, figuring it was really a man-hair shop and they wouldn’t even know what a flat iron was. I then tried another little shop, and I was filled with apprehension upon setting foot in the place. But, since I was just getting my hair blow dried and flat-ironed straight, how much could she f- it up, so I sat down in a chair and waited for the gal to come over.

Now, I know what I’m about to say is not the nicest. I know that. But she was an older lady with the stank of old cigarettes clinging to her dried-out lank locks, with the looks of a “hard water” girl who maybe bartends at night after putting up some bouffants of the blue-hairs during the day. It’s during these moments when I CANNOT speak up and just leave. I get paralyzed with fear in hair salons and let them do whatever they want to my head as they spin me around in the chair.

I dug my fingernails into my palms and just took it in silence. It felt like a head raping. I did ask – once – if she was going to leave it as pouffy as it was, and she stopped the chair in mid-swing and caustically asked me, “Are you serious?”. I mumbled something along the lines of, “just asking, I normally wear it more straight and flatter” and kept my mouth shut after that. I did decline the hairspray, didn’t want to “set” the look for good, and went home and re-did it before the wedding. Timmy told me it looked nice when I came in, but that’s probably more that he was trying to diffuse the look of tense trauma I had on my face. I managed to get it looking decent enough for the wedding, but I still can’t believe I gave “Hard Water Hairdo” a $5 tip on top of the $20 it cost me. They scare me, they really do. I tried to call Sarah, my gal from John Roberts, and proclaim my undying love for her, but the line was busy so I just hung up. Probably a good thing, because I more than likely would have broken down into tears upon hearing her voice on the other end of the phone – my saucy little Rachel Ray look-a-like, knows-how-to-do-hair friendly stylist. So. Another lesson learned. Maybe I needed to heal my hair with duct tape. Or put a nail in my head. Something.

I believe I’m going to watch Pan’s Labyrinth. I have a bag full of work I’m supposed to finish up by EOD Monday, especially since I’m off work Tues-Wed-Thurs this week, but it’ll wait. Maybe I’ll just have some extra espresso in my Starbucks in the morning and work super-fast. I have cats to cuddle and it’s raining, it’s pouring, the old man is snoring. 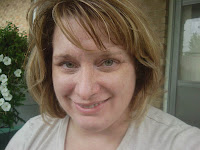 Peace, and enjoy the lazy-hazy-greyzie days of August.