How life wastes a day:

1. 1.5 hours on phone with Verizon Wireless to figure out why I can’t seem to get a decent signal with my $400 phone. All that time and effort of pressing special magic numbers into my phone, removing & replacing the battery, and now my phone refuses to ring in the house, it goes straight into voicemail and I get a beep-beep-beep hours later that there’s a message. And I dropped a call in mid-sentence while in my driveway today. Nice. I’m Verizon’s #1 Fan.

2. 45 minutes spent reviewing various My Space and blogger layouts before settling on one reflective of my homelife in the grand city of Parma – ergo, the Pink Flamingos on My Space….they need to update the offering for blogspot.

Some type of rot got ahold of the bottom and had at it. The storm knocked all the flowers off the other potential peppers, so I don’t believe I will see any fruits from these labors this season. Ah, well. Always next year! I was able to take a batch of grape & cherry tomatoes to Sophie today, so I’m getting some yield, but certainly not much.
Contrary to my post last week, I decided to try and breathe a second life into the flowers as well as the vegetable plants and gave everything a shot of Miracle Gro Organic Fertilizer yesterday. It will remain to be seen if it does any good.
Now for the question that begs an answer: Which came first, the hotdogs or the buns? Because I just purchased a package of Hebrew National dogs for dinner, and a package of buns to go with, and the hotdogs were packed 7-in while the buns were packaged 8-in. What up with that?? Why does there need to be a 1-off situation? For the record, we had heard great hype about the tasty all-beef greatness of Hebrew National’s and I must say I was less than impressed. I also purchased a package of the brand my grandmother eats, which she happily recalled she purchased a pack for 13 cents a year and a half ago. They’re a little more than that now, but certainly not the price of the Hebrews. God Bless Sophie, who ALWAYS remembers what she paid for something. We’ll have a hotdog taste-off later and see how the Bar S brand Sophie enjoys stacks up against the Hebrew Nationals. Maybe we just enjoy the taste of lips and assholes more than all-beef goodness.
Kenny and I enjoyed a mid-week get-a-way to Atlantic City Tuesday-Thursday. It was another fun time, although we had flight delays on the way out on Tuesday due to the storm, and then again on the way home on Thursday because our Cleveland storm had just enough time to catch up with us in New Jersey and delayed us once again. The pilot had to do a last-minute SWAP (Severe Weather Alternative Plan)
which re-routed us down around Virginia. It tacked on another 1 1/2 hours in flying time and we weren’t fueled for that length of a trip, so we had to wait for more fuel – which they can’t load in if there is lightening in the vicinity of the runway. So it was quite a production, but we made it.
We met a couple on our flight who were something else. They’re from Hinkley originally, made their millions doing something (they didn’t go into details on that, but they have millions to be sure), retired at the age of 49 and moved to Vegas 10 years ago. The wife was sporting a 6-carat solitaire, which nicely complimented her Rolex and her diamond tennis bracelet. She was a salty one, let me tell you. Coarse & Salty. They spend their days visiting various casinos, eating at one or another for free each day, and doing nothing more than that. Linda told me they don’t ever go to a grocery store because they have so much free food from the various places that she doesn’t even bother with buying the basics. Even I would get tired of that – but it works for them. They spend the summer’s here at their home on Catawba Island, and then usually take the opportunity for East Coast gaming action, ergo their trip to Atlantic city.

They have no use for small children, which was more than apparent at the airport on the way home. We were delayed, as I’ve said, and someone was letting their 4-year-old run amok – screaming and running through the throngs of people. Salty Linda blocked his path on his second pass through our area, with feet firmly planted in the middle of the aisle, shouted, “SHUT UP!!” at the little kid. I BURST out laughing because I have never seen someone just up & do something so socially incorrect, the thing that we all want to do, but don’t. The little kid stopped dead in his tracks, jaw to floor, and then quietly turned around and crept back to his mother, where he promptly burst into tears. The mother marched over and informed Linda she was “a horrible person” to which Linda replied, “yeah, I’m horrible, while you let it (yes, she referred to the child as it) run around here like it’s a daycare” and then said something along the lines of “I have dogs that are better behaved.” At first I was slightly uncomfortable, but then I had to second her motion on all that. Why in the world should I have to be annoyed because someone is too lazy to instill manners in their child? As a child I, #1 never the luxury of taking a trip that included a plane ride, and #2 knew better than to scream and run around in public. It just wasn’t an option. Period. And I turned out okay, depending on who you ask. Somewhat okay, at least. Well, not horrible for the most part. Anyway I told Linda she was Super-Super Nanny and all ill-behaved kids should spend 30 minutes with her. That’d fix ’em. Or scar them into silence for the remainder of their youth. Either way, whatever it takes.

When summer began I made two requests to Kenny: I wanted to drink many beers on nice patios, and attend a variety of summer festivals. I am happy to say that I’m accomplishing each of my goals to date. See, it’s only a dream if you don’t put together an action plan. I have a variety of local taverns with very nice patio options in the Que, and we’ve kept apprised of the festivals in the area to be sure we attend them. This weekend it was Brooklyn Home Days. Kenny was hosting the gig Friday night and all day Saturday, so I met him there after work on Friday and listened to the bands while enjoying a cold Coors Light and a gyro on an outdoor picnic table. What better way to enjoy a summer night in Cleveland? 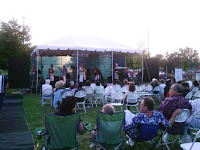 Timmy and I went up there to say hi to Kenny and have another beer and gyro Saturday evening. All-in-all, a fun time. Kenny’s back there now because his friend’s Polka Band, the Casuals, are playing today. They are famous for their hit “Grab Your Balls We’re Goin‘ Bowling.” I declined Day 3 of Home Days. Someone needs to make clean underwear happen in this house. And there’s my cue to sign off.

Peace, and I hope you all had dry basements after the gulley-washer we had this week!