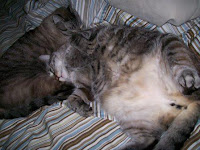 Stanley and Caesar are completely relaxed into each other on a lazy Sunday afternoon. I love it when they are cuddled up together.

I really don’t have much more to say than this: What a week. Life gets a lot more complicated the older ya get. I said goodbye to a friendship and that’s never an easy decision to make, but I’ve learned in the last few years that I guess I do have some things that I stand up for, even if it risks relationships. At the end of the day, I don’t want to be surrounded by people who take advantage of others that are close to them, and the negative energy that goes with that type of behavior. So relationships get severed as a result of taking a stand, which is always sad – but unfortunately I’ve had so much of that happen in the last few years that it’s becoming something I’m used to dealing with. Such is the ebb and flow of life.

Life is flowing in other areas, which is good for keeping it in some semblance of balance. We spent last night gearing up Week 2 of the Karaoke Radio Show contest and it’s really been fun to put some energy into kicking this off – who knows, it might actually catch on and become a little something! We had more contestants than we did the first week, so word is spreading. I got to be a judge, and I likened myself to the Drunk Paula Abdul judge – I think everyone’s fantastic and beautiful with the more beers I consume. I randomly compared the singers to sparkles and butterflies, and shouted out the words “rainbows” and “puppies” just for fun. Well, something like that…I actually drank quite a few beers and tried to not let that influence my judging abilities. One of the other judges, Kenny V., gave my boobs a high score for the evening. 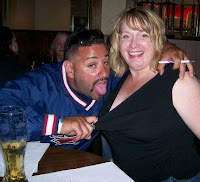 The cooler weather has been good for my little garden and the rain helped the lawn turn a lighter shade of brown. I got my first vine-ripened tomato today. It’s a Golden Boy variety, hence the yellow color. I’m saving it for a toast and tomato sammich later tonight. 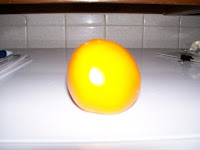 Against Rob’s recommendation that I finish The Great Gatsby before picking up a new novel, I started reading Wally Lamb’s book, She’s Come Undone. It’s really good writing in my opinion – very good reading for me. In fact, I’ve got a date with that book and my backporch chair a little later. Sometimes that’s all that’s needed to make for a happy day.

The next time I travel it should come as no surprise to me when I take my clothes out of my luggage and they are covered in cat hair: 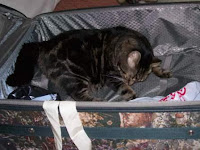 Timmy and I decided to have another summer party. It just seems wrong to not have a cookout get-together. I remember when I was married, I wanted to have parties all the time and those ideas were squashed by that fatass ex-husband of mine. So now I have Timmy who encourages parties, so we’d be foolish to pass up a summer opportunity. It’s a little stressful for getting the garage cleaned up enough, but the termites will meet their maker this week and we should be all set then.

I enjoyed a nice lengthy visit with my grandmother Sophie yesterday evening. Let me just say, Al Gore would be quite proud of the very tiny carbon footprint she is leaving behind. She is neither a squanderer nor a waster. She was commenting about the neighbors wasting water as well as laundry detergent by sending their kids to school in clean clothes each day rather than re-using them again and again before a wash. I kinda get her point, I have dry-cleaning items that I wear only to work and get a few wears out of them between cleaning cycles. But I think it’s a little different for wash-n-wear clothes that kids wear all day long – kids are stinky little sticky people. They need a good hosing down every day, in my opinion! But anyway, Sophie was Green before it had a name and a concert dedicated to it.

We may take an overnight trip to Canada this coming Friday. I love the fact that we can get away on a whim if we choose – why the heck not go!

Friday night we saw Transformers, there was more that meets the eye. It was pretty enjoyable, considering it’s a kids cartoon/toy made into a very long feature.

There was a bit of strife on the golf league this week, which is really just crazy talk that golf should have any strife involved. My partner and I couldn’t make it this week due to work committments and deadlines and it caused all sorts of a commotion. Emails were sent and I was in no mood to be politically correct and polite – we were accused of being discourteous and it was suggested we’ve been cheating (we’re in 1st place), to which I took great offense to the suggestion. I don’t cheat. Period. So my retort was as abbrasive as the accustions warrented, and to date there has been no follow-up response. Stupid people all around me it seems.

We’ve got the radio show tonight, and I’m going down to the station with Kenny to take photos. They have Scott Savol coming in as a Mystery Guest, and regardless of anyone’s opinion, he was in the Top 5 of American Idol and that says something. He’s a quasi-celebrity in the area, and a karaoke radio show is the perfect venue to leverage him, so I’ll be there to take pictures for the My Space page. I’m such a hipster.

The Girl Cat has been a bit better behaved lately so she’s been allowed to stay so far. Widda hasn’t been too picked on, and in fact she turned the tables and actually bit Stanley in the face this morning when he was infringing on her pillow.

That’s it for this week. I’m drained and have decided to go join the cats in a short nap.

Peace, and if you do nothing else in your life, stand up for something you believe in, no matter what the cost. People do different things and care about different things. No one can live a perfect life; everyone can make choices to live in the best possible manner that they can, so determine what that means to you and live to it.