My font choices are gone – now what?? How can I be expected to type in Times New Roman?

Just got ’em back by relogging in – whew! That was a close call, thought I was going to have to turn blogging off completely. Yes, it would take just that little to shut ‘er down. I didn’t realize how font-sensitive I was until just this very moment. Close-call averted. Everyone can breathe a sigh of relief that there’s another chance to read about all the important things in my life, such as my recent bout of uncontrollable itching.

Yes, that’s right. I’ve been itching for a week now, since Vegas. All over, particularly the back of my thighs (killer), arms, belly and neck. I’ve scratched myself raw in spots and have some small bumpy rash-type things, but not everywhere. It’s driving me crazy and I can’t stand to be in my own skin. I don’t know if it’s allergy-related or not, but if it keeps up I guess I’ll have to go see someone about it, but it seems to be a little ridiculous to complain about itching without a more visible cause. No, I haven’t changed laundry detergent or soap, medication or vitamins, eating or drinking habits. Scratch all that. I’m For-No-Good-Reason Itchy. Ya think I’m kidding? Here’s a big red hive on my chestish area. 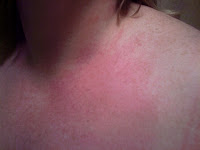 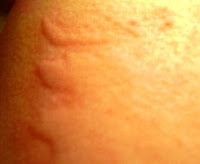 What the hell is causing these to mar my perfection?? I may have to ask Sally to take me for some allergy patch tests since she’s the pro with allergy-related malices.

A good part of the weekend was spent at church, St. Charles in Parma to be exact. Lots of praying was done and there’s a good chance I’ll be going back tonight for a couple of hours as well. Nothing like a good carnival with a casino room to get me into church on the weekends 🙂 We spent Friday night playing Let It Ride dollar-poker, until they shut the place down at midnight. We listened to a little polka, ate a hotdog and gambled. A perfect Parma evening! Our “dealer” was the best part of the night, Frank Gonet had a very dry sense of humor and kept me laughing out loud all evening. He’s back tonight so we may have to ride up there after the radio show, although that breaches my Sunday night at-home-in-pajamas-no-later-than-9:00 Rule. 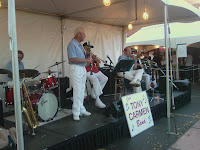 Wednesday night the Karaoke Radio Show contest kicked off at O’Feenies. I wasn’t going to go, as it’s a work night for me, but I went at the last minute and it’s a good thing I did; I had to take control of the sign-in, money collecting, and general organization. It all turned out surprisingly well, we had 12 singers, which was 10 more than I anticipated, and we’ve got some good stuff for the radio show tonight. I don’t know how I became a silent partner, doing everything for no reward, but I’m putting it on my resume anyway.

The biggest news of the evening was that I got asked out to dinner by some guy sitting at the bar!! Wow. It’s been a long time since I got hit on. It’s even more amazing because I had a big zit on my chin and was with Kenny, but all that apparently doesn’t matter when you’re wearing a low-cut shirt. Oh, he was also wearing a wedding ring, which I called him on, and he had some excuse that he was “separated” and wouldn’t take off the ring until it was legal to do so. Let me tell ya, Pal, that’s not the way to get a date. Unless you’re George Costanza.

Check out the My Space if you’ve exhausted all your normal e-reading and need one more thing to read before doing something productive with your time.

Our not-sure-if-it’s-a-plant-or-a-weed got too big for it’s own britches and fell over on itself. It probably has never been allowed to grow so large before and just didn’t know how to handle it once it reached 4 ft. tall. Timmy got out a shovel and dug it up at the roots. I’m slightly saddened. 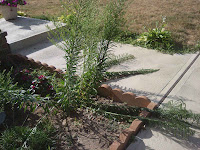 I had my worst work-week so far in my new job. The Sr. Product Analyst resigned, she’s relocating, and really didn’t do anything with our caption while I was on vacation, so I’m a solid week behind and had to meet with my boss to reallocate the workload. I don’t blame the girl who left, I wouldn’t overwork myself either, but it put me in quite a predicament and it will be one busy week starting tomorrow as well. I’m going to have to type a lot of words very quickly! Guess this will be my chance to either shine or burn on my own. Since I’ve been doing most of the work anyway, it’s not going to be much different from what I’ve been doing – I just may actually get some credit for my efforts now. Or I’ll suck 🙂

Melinda’s been graciously dropping off a few loads of my stuff I’ve had stored at her house each week on her way home from work. Figures, my old Mr. Coffee coffeepot showed up along with a box of shoes, right after we purchased the new Cuisinart, which we really like and don’t want to replace. That thermal carafe really keeps the coffee hot throughout the lazy sipping Sunday. Now I need to find room for all the crap that’s being brought over, all of which I really do want to keep. So much stuff, so little space. Such is my life.

Is it sweet corn season yet?? Anyone? I don’t want to miss out on it, but haven’t seen it for sale at the little Farmer’s Market.

The Girl Cat has taken to being a great big bully, beating up my tiny black Widda at every turn. She’s even blocking her from using the litterbox, which has brought about a whole new set of problems. The Girl Cat has one week to shape up or she’s going back to Linda’s. I’ve been spanking her every time she bully’s Widda, and now she runs scared from me. Good. Let her know what it’s like to be bullied. How can such a pretty Girl Cat be such a great big bully? She looks harmless enough. 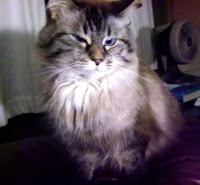 Maybe my itching is a cat-hair allergy. Wouldn’t that be something.

Speaking of things that might make one itch, we discovered we have termites going TO TOWN on boxes stored in the garage. When we organized the garage a few months ago I noticed some of my boxes of stuff had been eaten away, but I – incorrectly – assumed it had happened while in the storage unit. It didn’t dawn on me that they couldn’t have been picked up and moved in that condition, because the contents fell right out. Kenny discovered this on Friday, his boxes of CDs that he sells on Ebay have been eaten away, destroying some of his inventory. It’s going to cost about $500 to get it taken care of, they’re coming out on Monday. It’s always something around here, to be sure. And every time something like that crops up, I’m glad I’m not a homeowner at the present time. I don’t want or need that added financial burden. The termites were heading towards some of my pictures in the garage, but the pictures got rescued in the nick of time. I’m sure Kenny wishes his favorite picture of mine – the Piccaso-like disjointed lady – was sitting right in the middle of the ‘mites, but it’s safe & sound on the guest bedroom wall.

If the solution to kill the termites f’s with my garden, I am going to have one big stompin‘-ass fit, to be sure. It is, of course, right next to the garage, and my plants are bearing fruit and I refuse to spray them with killing fluids. I’ve spent too much time tending them to just let them go over a few termites. Who cares if they can take the garage down, given enough time? My tomatoes and peppers are first priority this season!

My cat Newfie gave me a little scare this week. Kenny called me at work and told me she appeared disoriented and glassy-eyed. She finally snapped back to normal after some additional food, so I’m hoping it was just an isolated incident of low blood sugar, since she has diabetes. She seems to be fine today, she even walked all the way into our bedroom, which is a big feat for her.

Well, that’s about it for now. Emily lent me a book I want to start today, She’s Come Undone by Wally Lamb. But first we have to do some household cleaning. Kenny’s not too happy about that plan, he wanted to go to the movies, but we’re doing stuff around the house whether he likes it or not. It’s on the brink of getting out of control. We were out all night Saturday setting up his system at a bar in Broadview Hts for another DJ to use (he’s renting out his system), the we went to another bar in Brookpark to pick up some commercials his other DJ friend had made for the radio show. While we were at that bar, Whiskers, I met a karaoke junkie named Eric, who was a little on the slow side, but really nice. I wasn’t sure that he was officially “slow”, as he told me some raunchy jokes, including this one:

How can you tell that you’ve been to a gay picnic??

On that note, I bid you adieu.

Have a Peaceful week!!