What a fun week it’s been! Kenny and I jetted off to Las Vegas on the Fourth of July where we spent three fun-filled nights. Caesars Palace comped Big Spender (Kenny) our 3 nights, so we got to stay in the lap of luxury. We were a little nervous because the place is so huge, but it was very easy to navigate once we got the lay of the land. Timmy and Tina came in on Tuesday, staying at the Luxor, but we hooked up with them to dine at In-N-Out Burger and Kenny and Timmy played cards together on a few occasions. No trip to the West Coast is complete with out a Double-Double & fries!

The trip was even more fun since Rusty & Geri were also there the 4th thru the 7th, staying at Paris. Geri’s birthday was the 5th, so they try to always plan a trip to Vegas around this time. We met up with them on Thursday since our first night there (Wednesday) was spent drinking much cold beer at Caesars and I was in no condition to go wandering around the town. 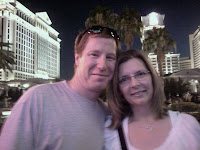 In fact, I believe I was passed out in bed around 11:00, after we had a fantastic dinner at the restaurant 808. Caesars has so many of my favorite slots, I played hard and often. Below’s a pic of some of Caesars at night – it’s so pretty there! Yes, the sky really is that black.

Once we hooked up with the Bowens on Thursday, we played many hands of cards together at Harrah’s and the old favorite, Casino Royale. Casino Royale is this dumpy little hole of a casino, but they have cheap, fun tables so we always like to stop in and play for a while. Geri was on fire – it was her birthday, after all – and got cleaned up at 3-card poker. Rusty bought Geri got a fun new Tiffany necklace while in Vegas for her birthday. She gets the best Vegas presents!

I wasn’t having as much luck so I joined Kenny at a virtual 3-card poker machine, which was a really cool video game invention. I ended up with a straight flush, winning over $800 on 1 hand so I cashed out and pocketed my winnings. From there we wandered to Harrah’s and played even more, where I taught them how to play a card game called 3-5-7, while Kenny, Timmy & Tina played Crazy 4 Poker. Rusty really liked 3-5-7, we all did pretty good on it, but it was the Friday night playing where Rusty really cleaned up – he won thousands, I believe. He & Geri had lots of piles of black & green chips. I did really well, too, getting two straight-flushes (pays 40 to 1) almost back-to-back. I had my own little stack of blacks (over $800) and actually had to fund Kenny for a change!

My luck overall seemed to have turned for the better, I didn’t get beat up too hard at all this trip, and I believe I owe it all to Frannie! One day at lunch I mentioned I have a gambling maloik and Frannie laughed and told me the way to keep the “evil eye” off me is to wear something red. She said that’s the old wives tale. So I wrapped a red napkin wrapper around my money and it certainly didn’t hurt! I kept that napkin wrapper with me the entire time – I believe it’s still in my purse. Jill carries dog teeth, a fake nail (from me), one of my tooth caps, and who knows what else in her good luck pooch, so I’m not too strange in comparison with my napkin wrapper. Well, maybe a little strange when I took it out and rubbed it all over the slot machines I was playing. But what happens in Vegas….isn’t strange at all in comparison to some of the shenanigans!

On Friday I used my free Qua spa pass from Caesars. It’s a nakey spa. Well, nakey if you wanna be. I started out in my bathing suit, but felt like the strange one, if you can believe that. So I stripped off like the rest of ’em and took a svitz in the steam room, whirlpooled my tensions away and ended with a turn in the arctic freeze room. It had a fancy name, like a Freezeatorium or something crazy, but really it was just a hyper-cold room with foam snow falling from ceiling. I of course was never fully nakey, most did wrap a towel around and of course I needed something between me and everyone elses beavers that came before mine on the chairs. So it wasn’t as “out there” as implied. But I did see a lot of stuff. Some good, some not so good. I’m pretty sure I know which category I would be in 🙂 They also had a nakey pool, the Venus Pool, but I didn’t really have time to wander over to check them .. er…it out. Gotta save something for another trip!

No trip would be complete with out a fakey Elvis (not a nakey Elvis): 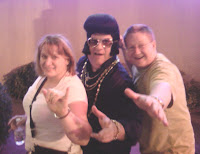 Kenny was on the way to tying one on whichever night this was, because, as he put it, “The beers are just so….FREE!” I believe we were on our way to the Flamingo for more free beers and gambling.

Friday night we had tickets for the 8:00 Blue Man Group show at the Venetian. We got over there in plenty of time, 7:30, and discovered that it was already underway. Seems it starts at 7:00 on Friday, not the 8:00 I had read on the website. WTF. We had front-row seats and sat next to two gay guys who were borderline obnoxious. Well, not borderline. They were obnoxious and one of them actually got kicked out at some point for some shenanigans. You have to be pretty bad to get kicked out of something in Vegas!

7-7-07 was as busy as you could imagine, with brides running amok. My last wedding was on 7-7-92 (9-2=7), and we all know how that turned out so I don’t put much stock in that whole numbers thing. Well, maybe it’s more that I picked a horrible fatass cheater of a husband and less that I picked a bad date 🙂

Our flight on Saturday was a long ordeal and we weren’t sure we were actually going to make it home. Our plane’s brakes broke and we were all deplaned, with murmurings of us not getting out of there until Sunday. Kenny and Rusty called our preferred players hotline and reserved 2 more nights at Bally’s just in case. I was totally excited at the thought of 2 more nights in Vegas and was all set to stay longer. I was even on the winnings, as was Kenny (he’d just won the double-diamond jackpot at the airport) and was ready for more gambling and drinking. I was probably the most excited person they’ve ever had for a delay. 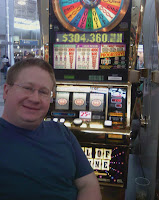 We got our tickets switched over for a Monday morning flight, shuttle service vouchers, meal vouchers and were all set and then at the last moment they fixed the stinkin‘ plane. So we all came home, but it was a long flight. We had to make a stop in Denver for more fuel, they couldn’t fly it with a full load from Vegas because it was too hot outside – the plane was too heavy for the hot, thin air. That added another hour and a half onto an already long day. We ended up getting back into Cleveland around 3:30 a.m. Sunday morning. Needless to say, I’m still tired.

It wasn’t until we returned home that we read the full story about the sniper in New York, New York. That would have been scary! We were across the street when all that was going on, at the Flamingo. Just another case of a wackadoo wandering around. Reaffirms my belief to live as hard as you can while you can. You never know what the day will bring.

We had no celebrity sightings, but did see some hot chicks. Platinum-blond, big boobie hot chicks. Maybe they were someone and we just didn’t know it – some of The Girls Next Door or Pussycat Dolls. That’s as close as we got to fame, other than Big Elvis, of course.

With both Geri and I on vacation, Jill and Fran were on their own for work lunches – we’ll make up for it on Monday!

I think I have a minor addiction to nose spray, by the way. In case you were wondering.

I’ve got lots of little tomatos on the vines, and the peppers are starting to peek thru. Hooray! Nothing died while we were gone, thanks to Kenny’s mom Linda watering and maintaining.

That’s it for now – this blog is all about me this week. If you haven’t stopped reading yet, Peace and enjoy the heat of July!