I got motorboated by Kristen Friday night. Yeah for the girls!

My quest for a new coffee pot ended today down at the Lodi Outlets. We settled on a Cuisinart, even through it wasn’t the top-rated pot, according to Consumer Reports, which Meggan so kindly printed out for me. She purchased the $26/year membership when she was looking into purchasing an elliptical trainer. Just one more reason she should be my bride: she’s a good researcher. I sure hope this new pot meets my expectations. I just want a good cuppa joe with little hassle. Very reasonable, I believe, but we shall see if it delivers on it’s promise tomorrow morning.
Friday night we celebrated Emily’s birthday with a few cocktails on the patio of Blue Moose.

It was fun, and there were a couple o’ fellas there who were complete throwbacks to the 80’s. Actually, I’m not even sure the 80’s are the proper era. I told Emily they were the white bread for an Emily sandwich, since it was her birthday and all. They’re twins. Wouldn’t she look sa–wheet nestled between them?! Hey, what are friends for – just trying to help a birthday girl out. They were excited to let me take their picture once they found out it would be posted on the ‘net. 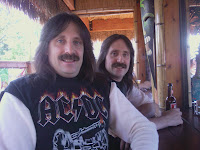 Afterwards, I met Jill and Anjie at El Rodeo for a light dinner and girl talk. I’m still a little in love with Anjie, even though she’s now married – drat! She’s pretty and she smells good. Is that being unfaithful to Meggan?? 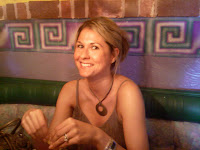 Len was out of town par-taying with the guys in Chicago, so Jill and I went back to her house after dinner and gabbed on the back porch until well into the evening. She has been reading the latest & greatest “road to happiness” book, The Secret. The idea of the book is the Laws of Attraction, that if you think and act in positive ways, you’ll attract positive things. They try to base it into scientific evidence, but then that contradicts the scientific evidence that states that opposites attract – i.e., magnets and me with bad husbands. So which is correct? Well, I guess whatever sells the book at the moment.

Saturday was spent painting the spare bedroom in our house. It was the last room that hadn’t been touched yet so I awoke and declared that Saturday was the day. I had it finished up by 5:00 and it looks very fresh. Now I have to put all the stuff back, and since that involves rearranging and organizing, it’s not going to be a quick process. I’m sitting out on the back porch procrastinating, but I’m telling myself that blogging is much more important. Maybe I’ll make myself a fresh pot of coffee in my new coffeemaker and get started! Yeah. Maybe 🙂

Since we finished a major project, we rewarded ourselves with an evening at JBs Arcade in Akron. We don’t think it’s going to be open much longer since the Governor is making it his mission to make them illegal, unless they give away prizes rather than cash. I really don’t know how these little places are in business anyway, they sure seem like slot machines to me! There’s no skill involved, unless you begin to recognize patterns and bet big when that happens. Which is what Kenny does, and why he comes out ahead. He didn’t make a fortune, but he broke about even after funding my unlucky ass. I was even following The Secret, trying to attract a jackpot, to no avail. Maybe there’s more truth to the opposites attracting after all – I was positive, I attracted negative. Hard to argue that.

I had a major moment in my life today: I had to use a public restroom to poop. We were all the way out in Lodi and something from lunch did not agree with me. There was just no way I could make it all the way home, it was an hour away. I was in a cold sweat with a stomach cramp and Kenny pulled into a Burger King and said he wasn’t driving anywhere until I went in there and pooped. Of course, someone else was in the restroom using another stall so I had to wait them out. I finally managed to overcome my neurosis and public poop, but I wasn’t relaxed about it. When I came out Kenny was convinced I didn’t go and thought I was just lying to him to get him to drive home. But I am officially now a public pooper – but only in an extreme case of emergency. I really need therapy 🙂 And I didn’t overlook the irony that when he was having a bad moment on the highway months ago, we found a Burger King for him to use and once again a BK came through in a pinch. Get it….pinch? Ah, toilet humor – that’s the official name, by the way, according to my job.

I have one more tomato on the vine, but nothing further. Just two little greenies trying to grow. I’m almost ready to throw my potted pansies in the trash, they are so demanding and such high maintenance. Again, today, I got the droopy look. And I just watered them yesterday! I didn’t even miss a day and they are downtrodden. Sheesh.

Rusty and Geri jetsetted off to New York this week. Geri sent me a text message that they saw Bruce Willis. Can’t wait to hear the scoop on that! We should give her a camera and let her be our travelling paparazzi. She goes enough places, that’s for sure!

We leave for Vegas July 4th – that’s right around the corner. It feels like 1/3 of our summer is almost over, and it really just began. Too short in Cleveland, to be sure. We have our cruise in September, so I think it’s going to fly by and be here before I know it.

One of Kenny’s past girlfriend’s son came up for a visit this week. Michael comes up every summer and stays with Kenny’s mom, and visits and just generally hangs out. He’s 15 and couldn’t be any nicer. He’s into music, plays the keyboard and just got an accordian, inherited when his grandfather died. So he & Kenny have a huge common interest, and they did a lot of one-on-one stuff, including going to the Rock Hall and seeing some movies. The funny thing is, he looks so much like Kenny, it causes a double-take. Same build, same walk, same mannerisms. 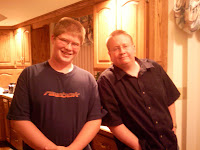 Kenny will be hosting an hour-long radio show starting Sunday, July 1st on 1420 (AM). He’s going in with a partner, and as of now it’s scheduled to be a 12-week Karaoke show with a contest, much like an American Idol show for the radio. We were busy Thursday night recording me singing, he’s creating some intro and promo pieces and needed, as he put it, “some humorous, bad singing.” Which is me, trying my best. I’m REALLY bad, but man alive, was it fun!

I sang Dolly Parton’s 9-to-5, Elvis’ Viva Las Vegas (natch), Shania Twain, Sheryl Crow, Kelly Clarkson – a whole montage, and I didn’t want to give up the microphone when he had enough. I was groovin‘ in my pajamas. The cats were going CRAZY, Stanley was at my feet howling and The Girl Cat started climbing up my back and biting my pajama top! Before the cats knocked me completely down and tried to eat me to get me to stop, I handed over the mic to Timmy and he took over with a little Prince and some other groups I’m not familiar with, that hard rock stuff he likes.

So basically, my music is going to get some airplay on the radio. Would ya’ll (see, I’m channelling Britney already) like an autograph? Once I’m a SuperStar I can guarantee I’ll forget every last one of ya’ll and move to Nashville where I will be hounded by the paparazzi and Geri will be sending text messages back to ya’ll that she saw me at Emeril’s or whereever. I’m so close to fame I can taste it!

That’s it for now. Once I get the bedroom arranged I’ll post before & after pictures. I should start my own t.v. show. Maybe once I’m a famous singer they’ll sign me up to host something on HGTV. Or maybe I can be the new host of The Price is Right!!

Peace, and do something that makes you happy enough to sing!