The potted flowers and planted vegetables are demanding, insisting on water EVERY day, not every other day; if their demands are not met, they greet me the next morning like petulant little children with droopy frowny-faces. Sheesh. Don’t they know there are plants starving for water in Africa, who would be GRATEFUL to get a drink of fresh clean water every other day?? Well, I’ve succumbed to their demands for the most part (had to revive the pansy’s with a late-night drink and another one first thing this morning), but it’s paid off: 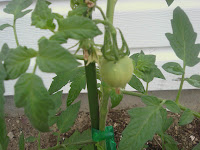 A baby ‘mater on the vine!! Angels are singing, trumpets are trumpeting! The fruits of my labors have been born!

Now if we could only decide if this is a weed or a plant: 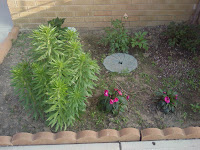 It’s the tallest thing in the flower bed, and neither Timmy nor I remember planting something of this nature, but it looks like something that may sprout a flower at some point. Kenny insists it’s a weed, as it’s off-center and hardy, and thinks it’s funny that we water and weed around our weed. We have too much invested in it now to just carelessly pull it up, so if it is a weed we’ll see just how big it gets by September – I wonder if it will grow 5 ft tall? Probably, with all the nurturing it’s receiving.

Saturday both Geri and I had appointments at John Roberts in Solon. I had hair and she had a mani–pedi scheduled around the same time. Boy, we lead hard lives! I surprised myself with directing Sarah to short-hair me. So now I’m shorn, but it’s cute. I was just over the attempt at long hair. It felt straggly against my neck. Kenny was …. surprised. I had Sarah extra-blond it for him. It still looks practically the same in front. 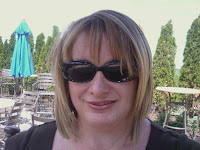 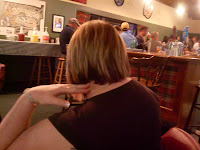 After our appointments Geri and I tried to grab a light snack at Blue Canyon in Twinsburg – I’ve heard her and Frannie talk about it and I was excited to try it. There was a bit of a snafu as we were trying to sit on the patio, a girl told us we could sit and eat out there and then a rather snarky waitress said it didn’t open for another hour and we could just have soda.

Eventually they figured it out and we got snacks with out sodas, and we enjoyed the nice afternoon before heading 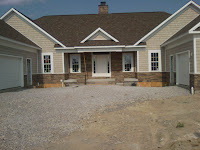 over to see the new Bowen residence that’s under construction. Wow. As nice as I imagined, it’s going to be quite the house. While at John Roberts we did tell Sarah we’d make a salon in the basement for her, let her move in and I’d buy her a car if we got our hair done for work every morning and for special events. Geri’s house does have the perfect salon area – she could fit both Sarah and me, and Sarah’s new car that I would buy her, and no one would be stepping on anyone’s toes!

Kenny had a karaoke show on Saturday at Briarwood Golf Course. I tease him about how “hard” his job is, playing music and listening to people sing, but this is what he has to deal with every time: 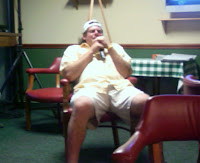 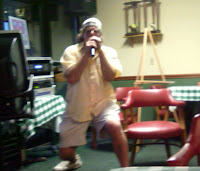 The singing is worse than the stage appearance. And loud. And off-key and screechy. I stayed and had some beers and a hotdog, then I was happy to leave around 10:30. No job is as easy as it appears, and I think dealing with drunk non-singers for 4-hour stints would rank up there with fighting fires. Well, maybe 🙂

We saw a great movie this past week, Mr. Brooks. It’s one of best I’ve seen in a very long time and well-worth the price of admission to a movie theater. Very suspenseful.

Our major mission for today is to go shopping for a new coffee maker. I’ve tried researching them online, but I’m not paying $26/year for a subscription to Consumer Reports. Our Bunn went to the treelawn, it broke and the water wouldn’t come out of the reservoir, so you’d have to continuously add water to it to get 1 pot, while the bulk of it stayed in the machine. It was $100, so I wasn’t thrilled to pitch it and now I want to be more cautious with my next purchase. Currently we have a $38 one from Wal*mart, and it’s getting returned today. It’s a piece of crap and I haven’t had a good cuppa coffee in a month.

I finished reading Fall on Your Knees, it was a excellent. I’m happy to know that I can finish a book, it just has to be a good one and not necessarily a piece a crap on the bestseller list.

On Meggan’s recommendation, I watched my Tivo’d episodes of Army Wives, which just started on the Lifetime channel. Now, most people scoff at anything on that channel, but I have to say it was really good! I watched both taped episodes back-to-back and can’t wait for the next one.

Today is Father’s Day, so to all you Father’s out there enjoy your day. We’re celebrating in the traditional manner at Hometown Buffet. I guess that’s as good as any thing to jumpstart a diet plan.

Peace and if you get the choice to sit it out or dance…just keep your drunk-ass in your chair.