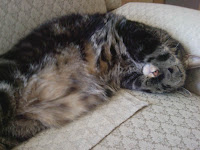 At this particular moment in my life, we are out of toilet paper in our house. On a Sunday morning, with coffee in hand, that spells disaster and makes me ponder how we got to this point. Luckily, Timmy usually keeps up with all the necessities of life and I’m sure he’s got a square to spare 🙂
So what were we doing that the household sundries were allowed to get to the point of extinction without us doing something about it before now? With Kenny gone on his trip to Tunica, I was quite busy! I caught up on Monday night with my Aunt Caroline and our (and my mom’s) friend Brenda. I chose Luchitas for a leisurely Mexican fiesta, but upon our arrival we discovered they are closed on Monday’s. Luckily, we can always find somewhere to eat so we chose our backup plan and headed over to Outback Steakhouse. We had a really nice 4-hour dinner, chatting about everything from family and relationships to politics and the environment. It was great to see them and I’m looking forward to doing it again this summer!

Tuesday night Emily and I met Kristin B. at Brio in Legacy Village. I had to make it a quickie because Kenny was flying in from Tunica with an ETA of 7:00 p.m. Kristin just had surgery and we were meeting her to say, “hi” and to check out the goods – she looks fabulous! She had breast reduction surgery (which I think is a crime!), but I can see her point, because, well…her points were in the way all the time. And she said they were incredibly heavy. Anyway, her new set looks fabulous, but I’m still hoping to get a peek of them in their nakey splendor. But that’s just because I’m a voyeur.

Kenny didn’t even unpack from his trip since Wednesday we were leaving for 3 days in Niagara for Birthday Week. He threw some fresh skivvies into his suitcase and we headed out Wednesday afternoon. We got a bit of a later start than we would have liked because the guys who installed the central air were here in the morning to finish hooking up the thermostat. Now it’s all in place and I just need to touch up the paintwork in the living room.

The drive to Niagara was very smooth, with us arriving around 5:00 p.m. or thereabouts. I wasn’t worried about getting up there later than normal, as Geri pointed out, the later you get there the more money you’re saving. The only source of concern was to make it in time to see Huey Lewis, who was performing at Fallsview. The Heart of Rock & Roll was Still Beatin‘. We had front-row tickets on Wednesday and 3rd row tickets for Thursday – it was a double-dose of Huey for Birthday Week. Both shows were really good, but Kenny thinks Huey was drunk on the first night – and he probably was!

I used to think Kenny was Huey’s #1 Fan, but I was happy to see there was someone even more off the charts there, which ratcheted Kenny down into the more normal zone. This guy had a Rod-Stewart haircut and he was just out-of-control nuts at the concert, waving his arms and jumping around. I would have taken a photo, but they were strictly prohibited and they were not kiddin‘ about it. This guy – who we thought was a girl, so we nicknamed him Dude Look Like a Lady, was also there both nights, and he had sunglasses for Huey to wear during the Back in Time finale. Both nights. I bet Huey just loved donning some nuts sweaty black sunglasses, but he did it and then gave them back to the guy both times.

We supported Paris Hilton by staying at the Hilton hotel attached to Fallsview. It was a GREAT hotel, with the best beds & pillows ever. We could see both sets of Falls from our window: 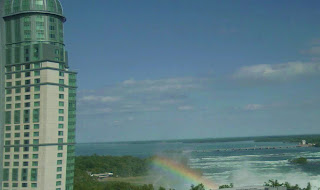 You can even see the rainbow in the above photo – which I attributed to be an omen of good luck for us! 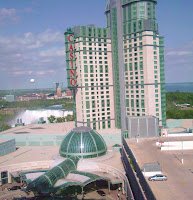 So I guess the rainbow was an omen of luck for Kenny; he won $5000 on one hand of poker!! He was playing a newer card game called Ultimate Texas Hold ‘Em and had $10 on a bonus-bet, which paid 500/1 for a Royal Flush – and he got one!! I was in our hotel napping before the 2nd night of Huey, so he had to celebrate his big moment with strangers. But just as well, I think it was my unlucky ass not hanging around him which made him win. That, or he won because I rubbed his money on the Christmas card from Jill of Virgin Guadalupe that’s still hanging on my fridge. I’m sure that had something to do with it – although it doesn’t explain my usual non-luck, ’cause I rubbed all my money all over Guadalupe and didn’t win $5000.

While we were in Niagara, Geri and Rusty headed to California for a nice vacation, travelling like Movie Stars. They had hotel reservations at the Belair (if I remember correctly) and planned on shopping and site-seeing on Rodeo Drive. Can’t wait to hear all about it on Monday! 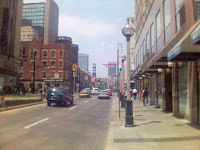 Jill and Len headed up to Toronto on Friday, and we tried to meet up with them at Seneca on their way up and our way home. We missed ’em, but Jill was there for about an hour and won $500 on a machine. We were there for a really short time, I’m just not a fan of Seneca. I think they put a maloik on me the last time I was there because I called them Indians instead of Native Americans. Apparently they don’t like that. Whatever. Too many names that are politcally incorrect for me to keep up with. All I know is, you can call me whatever you want and I really don’t care. Sticks and stones and all that crap.

Yesterday Kenny and I went to the movies and saw Knocked Up, then headed to the St. Anthony’s of Padua yearly festival. We had gyros, veggies and shared a funnel cake before heading to the basement level to play Let It Ride poker. We lost, but it was nominal, and I plan on writing it off as a church donation next year 🙂

Last night Kenny had a show at the Blue Moose and I watched The Queen. It was excellent, and I cried all the way through it, much as I did when Diana died.

I was suprised to see that I don’t have any tomatos on the vine yet. It’s been an entire week – I should be making fresh sauces by now!

My friend Heidi gave me a really good book, Fall on Your Knees, which I started reading yesterday. I was up til 4 a.m. reading last night; I can’t wait to have time to get back to it again today.

Looking back on the activities of the week, I can see there just was no time to buy toilet paper. Sometimes it’s just that busy.