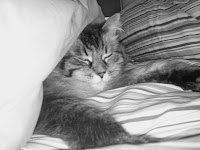 Kenny turned 39 today! To celebrate, he took a trip with his mom to Tunica, Mississippi for some pre-gambling before our trip to Niagara this coming Wednesday. I couldn’t go, have too much to do at work this week to take the entire thing off, but I’m glad he’s able to go. He doesn’t read the blog (he says he lives it, he doesn’t need to read about it after the fact), but the wishes are here for him anyway! The Girl Cat (yes, that’s what we ended up calling Reba) took a rest with me in bed this afternoon while we watched our television addiction, HGTV. Today we watched 35 Things To Do To Sell Your House. Now, neither The Girl Cat nor I 1./Are selling a house and 2./Have a house to sell. But we watched it together anyway.
Today is one of those non-descript days that is just kinda “here.” It’s trying to rain, which would be nice because I spent the better part of yesterday planting a few tomato and pepper plants. Good Lord, that was exhausting. I had to dig up the top layer of sod, and the area next to the garage that I choose as the gardening spot was an overgrown weed den, with wild and near-dead rose bushes that I had to cut down. I have 2 full cans of nothing but dead rose bushes and weeds. That area has never been maintained much. Timmy came back and asked what the hell I was doing, since no one sees it back there anyway. Good point. But it’s that whole pride-of-living-space crap that takes over and makes me work hard for really, naught. Kenny warned me that small critters would eat my hard work, and damned if he wasn’t right. He had a wedding to work Saturday night so he didn’t see my handiwork until Sunday morning, and wouldn’t ya know it, some little f’ing critter totally uprooted one of my tomatoes.
In light of the plant predicament, I stopped at Lowe’s after I took Linda & Kenny to the airport in search of some critter-ridder material. Now, knowing I’d be installing whatever solution I purchased sans assistance, my choices were limited. I ended up buying a couple of small trellis things and some deer netting, with anchors to secure it around the bottom. It actually seems to look okay, I hope it does the trick or I will be sorely disappointed (I stress the sore part) with my gardening efforts. After I bought soil, fertilizer, netting, trellis, plant stakes, stake tape, etc., my 5 tomatoes and 4 pepper plants probably cost me $100. I’m sure I could have bought a whole season of tomatoes from the local farmer for $100. Problem is, we don’t have local farmers in Parma. I guess I’m supposed to feel pride of a job, done. Instead I just feel sore and achy. 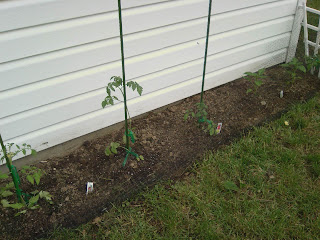 My baby birds have flown the coop, I believe. I didn’t even get to tell them goodbye. It was a very poignant moment this morning when I realized they were all gone. At least I’m pretty sure they are. I was out on the porch and the Papa Bird didn’t swoop me, the way he always has when we step out there. He was very protective of the babes. I read online that they like cherries, so we had been leaving some on the banister each day and they loved them. Now we have dark red poop in the driveway, but it was worth it to know that maybe we helped the little fellas get a start in life. I know the Mama & Papa were shoulder-to-shoulder with me yesterday as I was turning up the earth for the garden; it was a bug and worm buffet for them and they took full advantage. It was exciting to watch them, I hope someone uses the nest next season. We’re going to put a “For Lease, Move-In Condition” sign up by the nest to entice in another family next year 🙂

Rob became an official Retiree this past Thursday. No more working for The Man for him, now he’ll be working for The Little Man, taking orders from Baby Lance. That’s a job I would hate and I would suck at it!
Vicki starts her new job with Cocks Cable .. I mean Cox Cable, bright and early Monday morning. Yeah, I won’t get tired of making Cock jokes. Too bad Susan Cox (a girl from work) doesn’t work at Cox Cable – that would be a whole lotta cox on her business card! Jill, Geri, Fran and I met Vicki for one last lunch hurrah on Friday at Don Pablos. I’m sure it won’t be the last, but it will be the last where she gets to drink Dos Equix at noon on a weekday!
I bought myself a Bosch drill today while I was at Lowe’s. It seems really girl-friendly. Now I can complete all my household projects that the Mailman seems to have forgotten about since the 24-year-old girlfriend entered the scene. Stupid 24-year-old.
We had a new furnace with central air installed this past week – hooray!!! It’s a cool 72 in here now – no more sweating our Cox off! It struggled to cool the place down, being upstairs certainly doesn’t help, but it finally got the heat and humidity under control and was able to maintain the cooler temp. The guy has to finish up some of the thermostat work I think Monday, but I have no idea for sure. I’ll be at work, so I don’t know when/how he’s going to get in here, but I wasn’t in charge of the plans, I just enjoy the cool air. I’m excited that slowly, but surely, some of the amenities I love are coming back to my world.
My nephew Justin graduated Friday night. My sister-in-law didn’t call to tell me the details of the event until mid-afternoon on Friday, and I ended up working late and wasn’t able to go. I’ll be at his party on the 30th, and I guess the important part isn’t being there as much as it is giving money 🙂
Kristen and Emily joined me on a jaunt to the dirty bookstore on Brookpark Road for lunch last week. I had to make my annual pilgrimage to get a dirty book for my friend Joanne who left for vacation on Thursday. Her and her friend feel naughty when they have a book with cox on vacation, but she’s too embarrassed to buy it herself. It was Emily’s first trip into a dirty bookstore, and she was rather shocked at some of the paraphernalia available for all sorts of deviants. Emily did say that she was going to go in and ask if they had a fitting room, which I found absolutely hysterical. She chickened out, but it would have been a classic moment had she been able to pull it off. 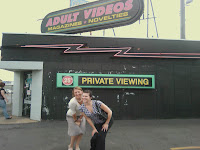 I added some new plants to my cute backporch, it looks even more awesome. 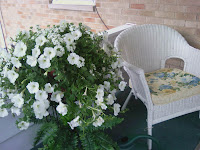 I’m going to go charge up my drill and get busy. Kenny will come home on Tuesday and see an addition screwed onto the back of the house. I could be dangerous with all this power in my hands!

Peace and may the force be with you.