My tooth fell out Friday night as I was flossing, getting ready to go out. Well, not actually my tooth, but a cap on a back molar. I’m lucky I didn’t swallow it, although that would have been a really good story. The thing is, when I went to the dentist about 2 months ago, I mentioned that it was painful and he took an x-ray and said nothing was wrong. Now, it pops off. I rinsed with warm salt water and popped it back on there and went out anyway. I went to bed Friday night fearing that it would pop out while I slept and I’d choke to death on it. Now THAT would be a good story!

It was a really normal week. Work, home, t.v., sleep. I golfed on Thursday, still haven’t gotten my swing back yet. It was fun night, though, so at least it was a best-ball scramble and I didn’t have to swing every time – when my partner hit a good one I didn’t even bother. We ended up winning the match, which was surprising, because we are really terrible. Even together we’re not a strong golfer. Kenny and I need to get out there on the weekend so I can practice more.

We’ve discovered a bird’s nest on our back porch, up where the downspout and the house form a “V.” The mama bird is probably more than a little ticked off that this is the year I decided to make the porch usable space. She’s probably been nesting out there for 8 years in peace, and now I take over. It was fun to sit out there and watch her feed the babies. I was quiet and didn’t let any cats out there with me. 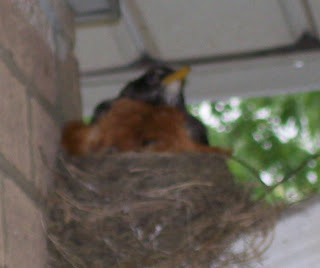 Cost me $59 to fill up my car this weekend. Whiskey Tango Foxtrot. Anyone want to take over my lease?? I see a small VW Bug in my future :).

Kenny and I spent the better part of yesterday visiting my aunt & uncle. My cousin Connie and her family came out and we celebrated her birthday. I had ordered a birthday cake to take as my dessert contribution and it ended up being this HUGE monstrosity of a cake with pink and orange frosting. It was pretty, but just absolutely the wrong size for a party of eight. It was embarrassingly big, but as Connie pointed out, “There’s no shame in a big cake.” Lesson learned when ordering from Beckers in the future: downsize.

It was the first time I’ve seen my aunt since my surgery last year and at the end of the evening she said she had to ask me a personal question. Now, anyone who knows me, knows that nothing is personal – I volunteer more info than anyone wants to know – and will show ya anything on my body if it adds to the story! So anyway, she wanted to know if I had a boob job, and I have to admit, I would ask the same question. They are starting to hoop out of my D-cups, and I believe growing larger with every piece of cake I eat. But the answer is no; no boob job. All me. Every last heaving, undulating ounce of them.

I apparently lost my mind over the weekend, as I do about once a year, and thought it was a good idea to get fake nails applied. It’s been 2 days and I’ve broken the thumbnail and am struggling to type. Maybe I can deal with them through summer vacations. I even had Geri’s refrain bouncing round in my head saying, “Just say no” to the fake nails, but I didn’t listen. Shop in haste, repent at leisure.

I’m supposed to give my Icebreaker speech on Tuesday for Toastmasters, but Long Holiday Weekend Girl does not want to work on it so I will be sending an email tomorrow to cancel myself off the agenda. Another day for that.

We had a cookout at Kenny’s grandmother’s today. It was really nice, as usual, but we got home late and it’s now after 11:00, so I’m wrapping this up for the week. I don’t have any good pics to post (unlike the Product Management Girls, who went out over the weekend and had what appears to be out-of-control fun with pictures to document it all!) so that’s it for now.