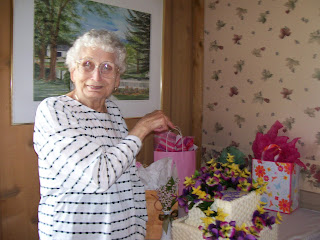 My grandmother Sophie turned 90 last weekend – go, Sophie!! I was busy getting all the details in place and getting her little bio written up for the party that I had for her on Saturday the 12th at Mapleside Farms in Medina. It turned out really nice, about 30 guests, with good food, a lot of catching-up, and a great cake. Nothing more important at a birthday party than a great cake! Becker’s in Fairview Park always does a fabulous job. Her little life story that I wrote was also a success, it made one of the waitresses cry, she had to leave the room. Below are some random photos from the party. 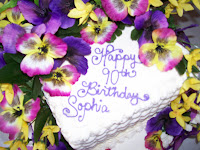 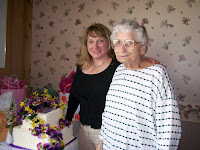 My cousin Dawn & her husband, Earl with his son K.C.: 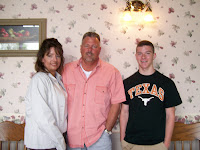 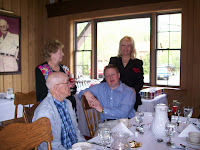 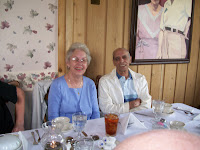 By the time I got home from the party Saturday, I was exhausted; I put on my pajamas around 5:00 p.m., Kenny left to run the sound for a wedding, and I passed out in a coma until about 9:00 p.m. that night. I got up, watched a rerun of The 40 Year Old Virgin (maybe that’s titled after me!), and was back in bed and slept til 11:00 a.m. Sunday morning. I was wiped out.

Since the party, I’ve been on a steady diet of leftover cake. I believe I’ve had a piece each night after dinner, finally finishing it up tonight while Kenny & I watched Die Hard 2 & 3. We’re gearing up for the 4th one which comes out in June -I had to catch up. We just now finished watching March of the Penguins. Well, I kinda half-watched; it was sloooooow. In the meantime, I got my My Space page up & running. I signed up for one months ago, but decided I liked this avenue for blogging, but then today I decided to have both. If you’re so inclined you can also view my My Space page at http://www.myspace.com/tracyeoh.

This past week I’ve been working on our little back porch, getting it all cleaned up and ready for summer. I painted the interior aluminum siding, vacuumed & scrubbed the carpet, potted some plants and brought up my outdoor furniture. It is all ready for reading, writing or just enjoying a cocktail. I love my little cute extra space! 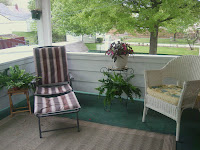 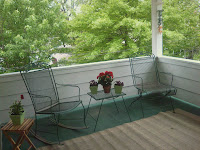 Friday night Kenny, Timmy, Tina & I had tickets to see George Carlin at The Playhouse. We didn’t actually remember buying them, so Kenny booked a show for himself at Swingos, running sound for Danny Lee’s karaoke. Since I didn’t want to go and be a 5th wheel with Timmy & Tina, they scrounged up a date for me – the Hot Mailman!! I was very excited to have a faux-date with Chris the Mailman (which is his full name – at least for me)! 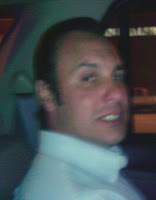 Unfortunately, he was a perfect gentleman all evening, even after I suggested making out a little bit during the terrible opening performance. Ya know, not because I wanted to or anything, just more as a time-filler 🙂 I don’t mind him being my faux-boyfriend. I think I’m as close as he has to a faux-wife – I cook and feed him whenever he’s around. He’s a confirmed bachelor so I’m as good as he’s going to get for a wife. Plus, he likes my boobs. I think those are the two most important things a faux-wife can offer.

Carlin was good and I saw Meggan, her sister Amy, Anastasia Diamond-Ortiz (her name is so great it must always be used in it’s entirety) and her husband Emilio on the way into The Playhouse. It was very fun to see them, although I did forget to bring Anastasia Diamond-Ortiz’s couch pillows – I found a large bag in the basement with them inside – one more thing to get rid of in the basement!

Today was very exciting garage-cleaning day. We got a lot accomplished and have quite a bit of stuff lined up for Planet Aid or the trash. I had thought of buying a shed for the backyard, but don’t think we’ll actually need one now that I’ve weeded out some of the crap I was hanging onto – for instance, a box of carwash rags. Like I’m ever going to do that again in the driveway. At least not here. Timmy tried to convince me to sell my bicycle, he is not optomistic that it will ever go to the park with me on it again. Especially with my non-park-going boyfriend. I’m not sure I’m ready to part with it just yet.

I spoke with my Aunt Carolyn today, I haven’t talked to her in far too long. We have plans to go out for dinner next Sunday. Tomorrow we have Kenny’s other grandmother’s birthday (not Marge, Grandmother Helen). She’s Kenny’s real father’s mother. Helen doesn’t get around well at all, we haven’t seen her since Christmas. She’s very religious so we’re taking her a cross I bought from The Vatican when I was in Rome. I think she’ll really like it.

Meggan got her remodeling project all wrapped up. She had a new tub and a tile job installed, then put on a coat of fresh paint – she is really happy with the way it turned out. Meggan’s promised to send before & after photos, which, by the way she had to get by using some sort of Pi calculation to triangulate the photo off of the reflection in the mirror because the bathroom was too tiny for a straight-on shot. And that’s just one more reason I want to marry her.

Geri’s “old” house finally got a For Sale sign up in the front yard. She has her first open house on Sunday, hope it goes well. Her “new” house finally got actual stairs in the basement so she’s able to go down there. She refused when it was just a ladder leading into a “black hole,” as she put it. She made Rusty draw her pictures of what it looked like down there to determine where to put the lights – she just wasn’t participating in going down there without steps!

I’m getting a little anxiety lately, Rob is officially retiring from AG at the end of this month and I’m not sure how I’m going to cope without our mindless IM’s throughout the day. We have a very strong IM relationship! Since he’ll be home taking care of that baby, he won’t have time to log-on from home; I will be completely adrift without my Rob-Rudder to steer my course. He’s my Rodder. Wow, that’s bad. But I’ll leave it in anyway. Rob, there’s still time to change your mind and let it all be about me!

Jill and I had to find out about Vicki getting a new job from John in the parking lot at work on our way back from lunch. She’ll be working for Cocks Cable…er…I guess that’s Cox Cable. Have fun Vicki, and we hope to see you before you start there full-time!

Golf started for me a few weeks ago, it’s been hard to get back in the swing of things – literally. My game is less than exciting at the moment, but hopefully it will straighten out before too much longer. I even bought a new stretching video to make me more “bendy” to hopefully help my game. So far, no luck. 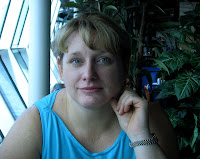 Well, that’s about it for this week. I didn’t realize how many people actually read this weekly blather until I missed a posting last week – I’m not sure this was worth the wait.

Peace and have fun!