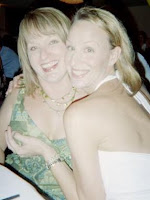 I recently found this photo of Jill and me from my 20th year high school reunion we attended during the summer of ’05. Wow, that’s almost 2 years ago! We had SO MUCH fun at my reunion, in case the photo didn’t allude to that. It was held at Michaud’s Town & Country Club in Strongsville, where there’s a number of party rooms that had weddings going on all over the place. We would find “dates,” just random single guys, who took us into the receptions where we stayed for a bit, danced, got a free drink, had some cake, took a party favor, then moved on to another. We barely attended my own reunion, but we were there long enough for Jill to dirty-dance with a lesbian couple who announced their pending nuptials at the reunion. She gave them a bit of an ass-slapping on the dance floor and did some other gyrations which caused quite a stir. I hope the rumor with my high school is that I’m now a lesbian! At least I had a foxy “partner,” and it’s a much better rumor than the one that I had lost a leg in a car accident, which ran rampant at my 5th year reunion. I think everyone was shocked when I walked into my 10th on my own 2 feet. Anyway, I’d much rather have the gossip be that I’m a lesbian with a wild partner! If it’s not going to be truthful, at least be titillating (Emily encourages the use of the word “titillating” as much as possible, so this one’s for her).
The girls and I got together this past Friday for card night at Jill’s. The conversation was OUT OF CONTROL and had me laughing so hard I was crying most of the evening. What a good outlet for stress – I hope everyone has a group of friends as fun as mine! I did ask Meggan to marry me as she’s everything I am looking for in a wife: she bakes a great pie; she knows pi; she has nice cleavage; she knows that guys don’t have pu….well….nevermind. That’s an inside joke 🙂 She turned me down, by the way, so for now I will retain my single status.
We had a full crowd for cards, with Chris Vargo getting out of the house and joining the festivities and Anastasia Diamond-Ortiz bringing her “plus one.” She’s pregnant with her first baby and looked fabulous! Additionally, her hair was super-soft, as soft as her dog Chloe O’Brien’s fur – which is saying something. She’s a librarian for the Cleveland library system and she’s got this sexy stripper name, horned rimmed glasses and a whole “naughty librarian” vibe working for her. She also said she will read my friend Rob’s book and give it a review – see, Rob, I work it for you every chance I get! Anastasia, the ISBN number is: 0-595-41488-5; recommend it for a book club or something! Rob is retiring in May and needs all the sales he can get.
The girls and I also warned Anastasia that she needs to be very cautious in naming her baby if it’s a girl; with the last name of Diamond-Ortiz, the wrong first name could send that baby out of the womb in clear heels, swinging from a pole. Chiffon Diamond-Ortiz = stripper. Sparkles Diamond-Ortiz = stripper. I vowed to come up with a suitable list for her to choose from – I do feel like I should have some naming rights as that baby was most likely conceived on either the bed or the couch that Anastasia bought from me last fall. It’s almost like I was there! How’s that for a thought for you 🙂
I tend to lean towards pop-culture names, so my recommendation for a girl is Addison Isabella Diamond Ortiz or Sawyer Marshall Diamond Ortiz for a boy. I just made those up, they sound pretty good! Or you could go with Emelia for a girl, since your hubby is Emilo. That’s pretty stinkin‘ cute, too! Well, whatever, I’d probably end up calling it The Small Baby or something like. Good luck and as always when someone’s pregnant, “Better you than me.” Ha!
Jill spent the evening reminiscing about high-school activities at Rajaland in Amherst. There really is a place called Rajaland, I googled it but could only come up with some fella’s link about camping trips he’s taken there in the 80’s. Jill’s reflections involved a bikini, a bag of Doritos and a boy. “Going to Rajaland” has been adopted as our new euphemism. We’ll never eat Doritos in the same way again.
To explain a bit, the Doritos prompted a whole conversation because my snacks for card night were all purchased at the BP gas station on the way over to cards: Michelob Ultra, Doritos, and 2 bags of Twizzlers. It was a hillbilly feast! Hey, I was working late all week and had to do what I could.
Saturday morning Roger from First Impressions came over to see if he could fix my carpeting in my car. When I showed him the problem area he exclaimed, “Oh my God.” I told him that wasn’t really comforting as he is my only hope of getting it fixed. It really was that bad, though. He worked in the driveway for the better part of an hour, and I’m thrilled with the results: 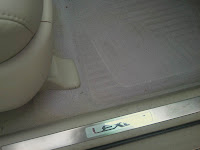 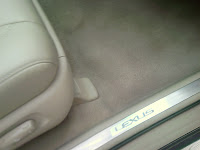 In the top photo you can see the purplish-tint where the cleaner lifted the color; the bottom photo shows the near-perfect match of the dye. Roger’s company is First Impressions, he does all types of interior repair including leather, vinyl, and of course carpet. He was inexpensive, and came to my home on a Saturday morning – how great is that!

I’ve got work to finish up before I go to bed tonight, so I’m logging off – although it was a very busy week and I could go on and on. But I won’t or I’ll never get to bed. I’ve got another 30 minutes or so of being insightful about greeting cards, so I can’t use up all my words here. I did, however, finally get the pictures off the disk from the broken camera and have all sorts of fun shots from the cruise. Below are a few of them, one is for Rob because he said I never post of myself & Kenny. Which isn’t true as I had one on there from Atlantic City, but this is a fun one of my crazy hair and cleavage.

Below are a few more from the trip. Can’t wait to go again in September. Peace and be happy this week! 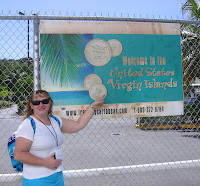 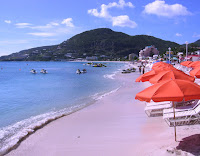