The Bang Bang Theories
Let's Be Friendies
I certainly hope there’s some truth to the quote, “April showers bring May flowers” because it will be nice to have a payoff for the rainy days we’ve had. It was a relatively nice month overall. I just don’t know where the time goes – it literally does fly by, especially since I started my job in Product Insights. The days zip along and it’s Friday before ya know it.


Nothing special enough to note this past week. Just did the typical t.v. shows throughout the week. Kenny’s Ford Explorer was supposed to be ready for pick-up on Tuesday and it wasn’t ready until Friday night. Things went a little hairy at the pick-up, they discovered their error of rolling tax & title into the selling price and wanted the difference. Now, I don’t believe they could have actually gotten away with that as we had a signed contract, but we really weren’t trying to screw them so we were okay with making good on it – although I did put up a bit of a stink to let them know it wasn’t just okay. They reworked the paperwork and it came back with an additional $250 more than we were expecting the reworked numbers to be, it’s for a “standard” delivery fee that all cars – new & used – have to pay. Well, I threw a fit and said we’d pay tax & title, but no more and they’d have to roll that $250 into the bottom line. To make a long story as short as possible, we ended up getting all our money back – Kenny had brought cash, so they weren’t happy at all about it – and we were ready to walk out the door over that $250. I asked them if their contract was an etch-a-sketch, and they just shake the papers around and change it to whatever numbers suit them at the moment. As they were getting his deposit money to return (that was a cash deposit made last week), one of the fella’s stopped the whole production, said they’d eat the $250, got me a beer and we called it a transaction. The new Explorer seems to be running great so far and all his music equipment fits in the back just fine. All’s well that ends well or something like that.

Friday night Kenny had a show at The Blue Moose in North Royalton. I went with him to help him out, he fell earlier in the week and really hurt his back. His friend Pete also went and worked the show with him, so I didn’t have to do much. Stayed just long enough to have a beer, listen to some singers and I was home around midnight. Sometimes it’s nice to get out on a Friday night, feel like part of the action. Some action in North Royalton 🙂

Saturday we spent the better part of the day sorting through paper/mail and doing some general organizing of the stuff in the living/dining room area. There’s just so much, I can’t even communicate the magnitude of papers/mail we receive at this house. I’m like Kramer and want to stop the mail altogether! Since that’s not possible I guess we just need to file it more regularly.

Melinda stopped over on her way home from work, it was good to see her. I unloaded a bag of shirts that I no longer wear. I swear to God, my boobs are getting bigger and stuff just isn’t fitting in the chest area anymore. Maybe I need more carrots, less carrot cake. Anyway, Melinda benefitted from my heaving bosom (I should be a romance novelist) and got some cute new clothes. I was happy to finally find a home for this super-cute shirt from Ann Taylor, I wore it once and never could fully commit to it – it had an empire waist or something that just made me feel preggers. Not a good thing for me! It looked good on her because of her smaller ta-tas (I’m using all sorts of boobie-slang) and I don’t feel bad that an expensive shirt is just hanging in the back closet.

As our reward for doing some stuff around the house, we headed up to Erie Saturday evening for more gaming action. I’ve decided that until the world comes up with a better hobby alternative, I’m good with gaming. As long as I’m spending Kenny’s money, that is. He funded us the entire trip. We gamed until 5:00 a.m., drove to the exit where we stayed during the snowstorm and slept til noon today. We headed back for a couple more hours since we were down just a little bit from Saturday night.

Lo & behold, I actually ended up winning a little something for a change! I won $540 on a penny machine. As Kenny pointed out, it’s not really a penny machine since I was playing max-bet of $1.50 (150 credits). But whatever, I was excited and cashed out, giving him the ticket since I was playing with all his money anyway. We pissed around the better part of the day, up & down all afternoon, coming home even. Can’t be unhappy with even – and that’s after paying for the hotel & our food. We had a really fun trip, all went well.

I started a new book this week, Burning Bright by Tracy Chevalier. I’ve enjoyed all of her books that I’ve read so far, and Heidi leant it to me since she has 2 more weeks before it goes back to the library. Let’s hope I get through it – knowing my recent book-reading ability, it’s going to be tough.

Geri’s house is finally starting to look like a house: 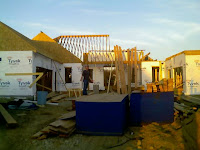 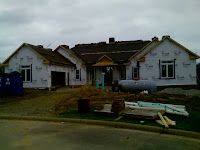 I’m excited for both her & Rusty and can’t wait to see it!

Sophie’s birthday party is coming up, it’s just two weeks away. I’m busy getting the final plans into place. I need to order a cake on Monday and call Mapleside Farms with the total number of people who have RSVP’d. I still need to write up a little story.

At Toastmasters this week, I won another ribbon for “Best Table Topics.” Those are nerve-wracking for me! As chatty and loud as I am on a regular basis, it’s surprising how nervous I get being in a “formal” speech setting. And that would be the reason I joined! I’m glad Emily’s doing it with me, that makes it a lot more fun overall. We’re scheduled to give our Icebreaker speeches on May 29th. I’d like to postpone it, but I have to get it done sometime. I received a message on Friday from one of the leaders asking me if I’m going to run for any of the officer positions. I guess I didn’t think I had been a member long enough to assume a position, but I would certainly do it – why not! If I’m going to spend the time in the group, I might as well make the most of it. I’d like to complete both the Communicator & Leadership tracks. If I’m giving up lunch with my friends every Tuesday, might as well make it worth my while.

I realized recently that my “baby” nephew graduates from High School this year. Wow. Wow. I volunteered Kenny to do Karaoke at his party in June, I think that will be REALLY fun. He normally charges $300 for Graduation parties, so it’s quite nice that he’s “in the family” and we’re able to get his services for free. He’s also setting up the sound system for Sophie’s party, we’re not doing Karaoke, but it will be nice to have the good background music going with really fun songs during the luncheon.

That’s all the words for this week. Peace and please stay healthy. I’ve got enough of my friends I’m worried about right now! Let me just say, I have no problems – there are people without feet, and people too close to home fighting for their lives – I am contrite for getting at all upset over my car carpet or my coffee table. Shame on me.